The incidence of Bulimia has attained significance over the past 30 years especially in young women in advanced countries.

Bulimia has gained importance in the past 30 years. In the United States approximately 25 million people are struggling with 'Binge eating disorder.' It is also estimated that almost 10 million females and 1 million males are fighting a life-and-death battle with other eating disorders such as Anorexia or Bulimia and only 6% of people suffering from Bulimia receive mental health care.

Comments should be on the topic and should not be abusive. The editorial team reserves the right to review and moderate the comments posted on the site.
NINA1

Anorexia Nervosa - is it a psychological disorder , or simply an eating disorder gotten out of hand? And how does it differ from Bulimia Nervosa? Participate in our anorexia quiz to find out how well you understand this condition; learn its ...

Suicide is an act of ending one's own life and it usually results from emotional isolations and inability to adjust and cope with one's environment.

Diabulimia is an eating disorder particularly in patients with type I diabetes caused by reducing and/or skipping insulin doses. 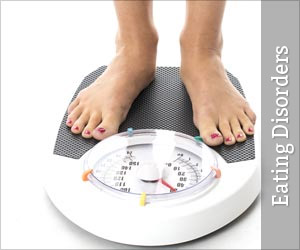 This medication is an antidepressant, prescribed for psychiatric disorders such as obsessive-compulsive disorder, social ...

This medication is an antidepressant, prescribed for depression. It is also used to treat bedwetting in ...

This medication is an anticonvulsant, prescribed for the treatment of seizures and prevents migraine headaches, either alone ...