We are all familiar with the stereotype of a broken nose in the movies. The man gets into a fight, suffers a blow to the nose, and is seen walking around with a tape around his nose. However, there is more to the broken nose than meets the eye. Nose fracture or nasal fracture or broken nose indicates a break in the cartilage or bone or the septum of the nose.

The first record of a nasal injury or fracture was around 1600 BC in the Edwin Smith papyrus. Nasal fractures account for 40% of injuries of the bone. Nasal fractures tend to occur due to vehicle accidents, fights, or falls during play.

To understand the nature of nasal fractures, one must understand the nasal anatomy. The upper part of the base of the nose is formed by bony processes from the frontal and maxillary bones which join in the midline. The lateral walls also contain small nasal bones called conchae, which form the turbinates. The septum, which separate the two nostrils is formed by a cartilage. The lateral parts of the nose contain the upper lateral and lower lateral cartilages.(1✔ ✔Trusted Source
Nasal Fracture

In general, some of the main types of nasal fractures are as follows: 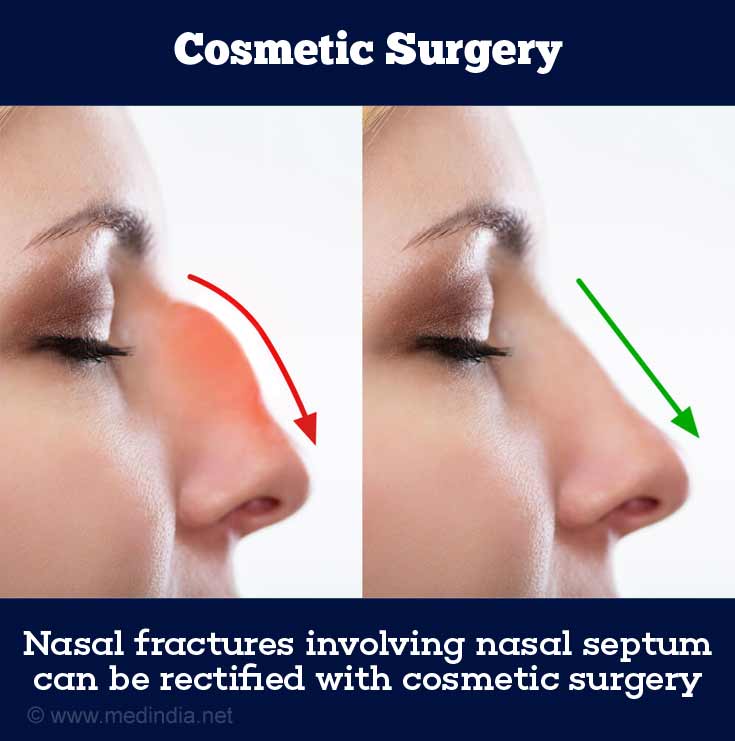 5. Fractures with a posterior depression: Following a nasal blow from the front, the nasal bones are pushed to the posterior. The nasal septum is also involved in this process.

In addition, nasal fractures are commonly observed in patients who have undergone plastic surgery. The nasal fractures in such patients have been classified based on the site of the fracture such as -

Symptoms and Signs of a Broken Nose or Nasal Fracture

Symptoms and signs of a nasal fracture include the following: 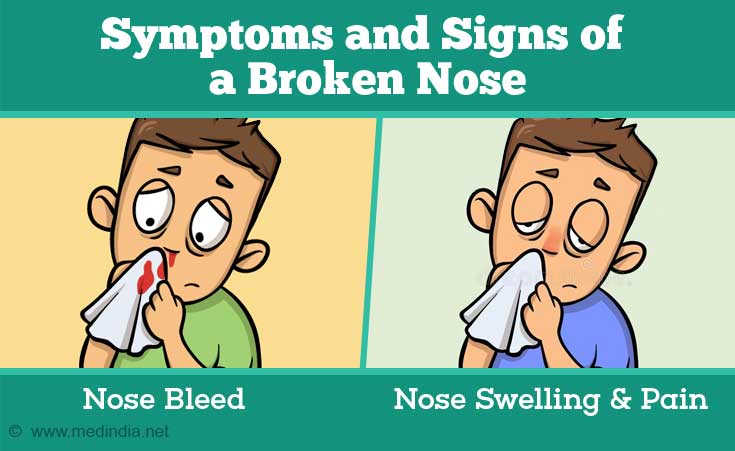 The physician examines the bones, nasal septum, and analyzes the deformity in the nose through the change in the shape or any associated swelling in the nose.

In an internal examination, the presence of a hematoma or blood clot in the nose is assessed with a cotton-tip applicator or a nasal speculum. The nasal speculum is an instrument with a broad tip that aids in gently separating the nose to check for any injury within the nose and potential blood clots.

A computed tomography (CT) scan is valuable in identifying the type of nasal fracture and to understand the extent of damage to the nose and other facial bones. 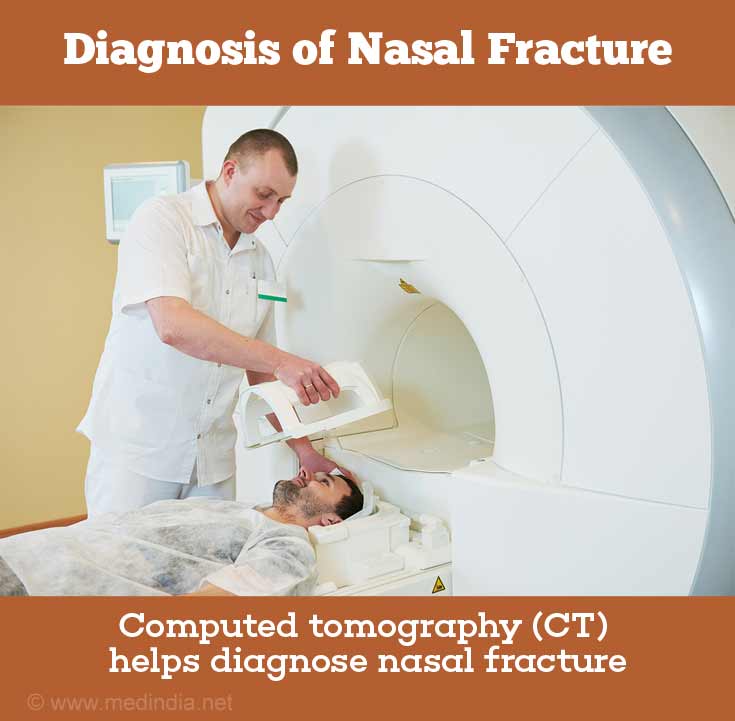 Radiographs or X-rays are not useful in ascertaining the type of fracture or to determine the treatment regimen.(4✔ ✔Trusted Source
Nasal Bone Fracture

The treatment of a nasal fracture depends on the extent of damage to the nose. The first measure is to put an ice pack on the swollen nose and to keep the head in a raised position.

Acetaminophen can be consumed within 48 hours of the injury to take care of pain but it is best to avoid nonsteroidal anti-inflammatory drugs during the first 48 hours.

In the first 10 days, a closed reduction procedure that does not involve surgery is used to reshape the nose. 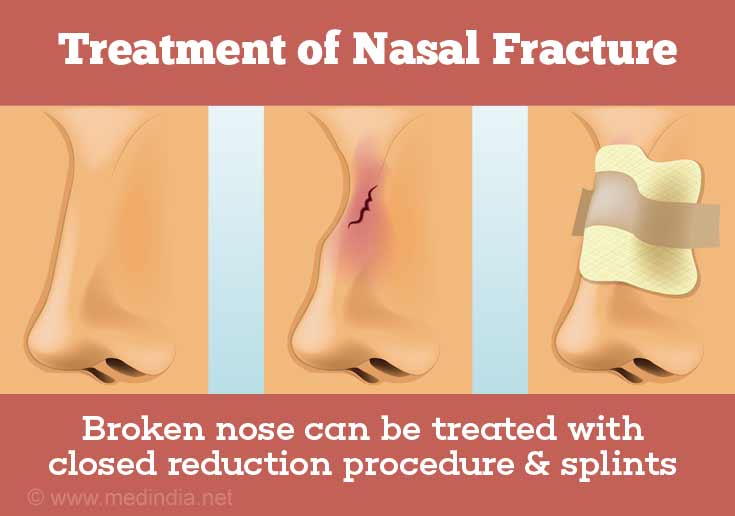 After 10 days of the injury, a surgical procedure, rhinoplasty or plastic surgery of the nose helps in reshaping the nose.

Septorhinoplasty is plastic surgery of the nasal septum.

Antibiotics are administered during treatment to avoid infection. The patient should be questioned wth regards to understanding the original shape of the nose and the extent of the change. This aids in restoration of the shape of the nose.(5✔ ✔Trusted Source
Broken Nose (Nasal Fracture)

Quiz on Nosebleed
Nosebleeds are common problems that often occur during dry climates. The condition is usually minor and stops with some first aid. Here is a quiz to help you understand more about ...
Sign up for Wellness Consult a Doctor Sign up for Selfcare
Advertisement
Health Topics A - Z
A B C D E F G H I J K L M N O P Q R S T U V W X Y Z