The shape and size of a womans breast keep changing during her life and depend completely on genetic factors, climate conditions, diet, lifestyle and the kind of support they give during and after development. It has been found that the shape and size of the right and left breasts for no women are identical. In fact it is quite common that one breast will be larger than the other.

There are a variety of breast shapes and types. We have tried to broadly classify them into 8 categories.(6Sternomancy - What Does Your Type of Breast Say About Your Personality? 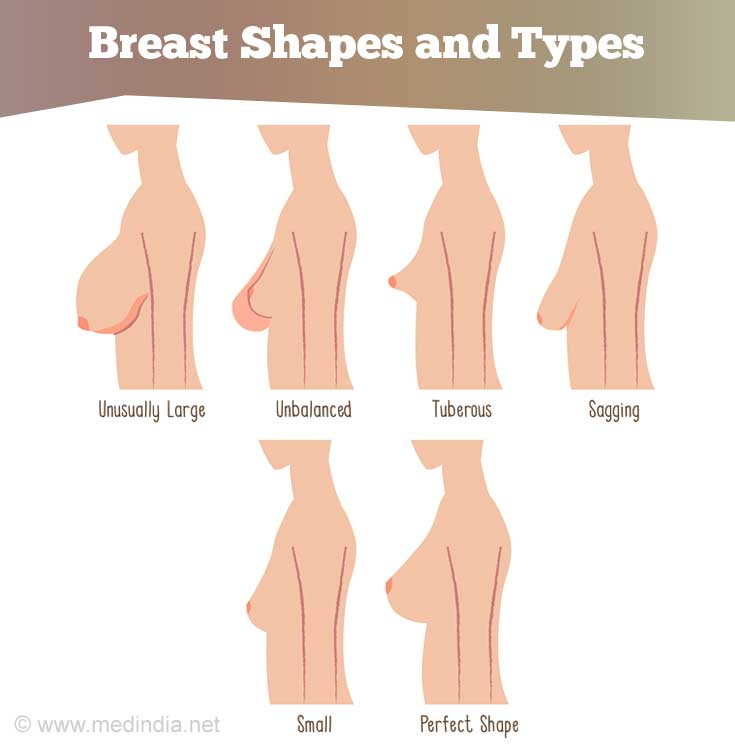 1. The Perfect Breast Shape: The nipple is pointed outwards and is parallel to the ground. The breast should be well toned and supple with no evidence of sagging.

This breast shape is quite rare. Often when women go for cosmetic breast surgery, they not only try to reduce or increase the size and shape of their breasts but they also wish for that perfect shape.

In younger women, if sagging occurs, it is generally due to insufficient support provided to the breast during its development at puberty. The tough tissues which provide support to the breasts may end up breaking or getting weak and causing the breast to sag down. Wearing the right bra during the developmental years could have prevented breast sagging for these women. The only permanent corrective measure would involve corrective plastic surgery.

2. Swooping Breasts: The breasts do not sag but slightly bend inwards above the areola. This results in the breast to bend so the nipples point upwards and are slightly vertical to the ground.

3. Small Breasts: Are found to have very little volume of fatty tissues in them. They usually have smaller nipples and areolas with little cleavage in-between the two breasts. Hence small breasts are not always welcomed by women.

4. Sagging Breasts: The nipples point downwards while the breasts also droop towards the ground.

Gravity always seems to work against anything that tries to stand erect and breasts are no exception. Sagging of breast can be due to a variety of reasons. Usually, this can be quite commonly found in women as they age towards their 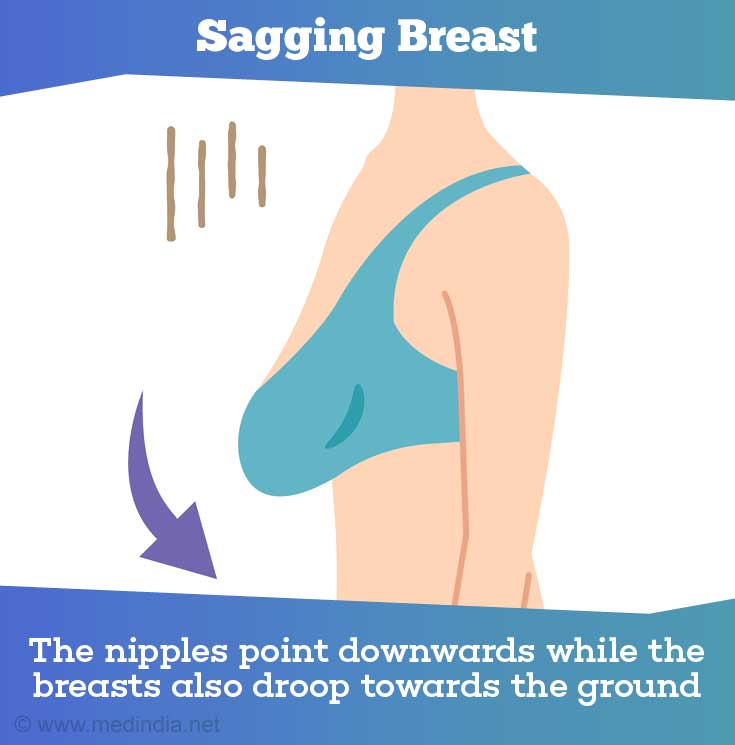 6. Constricted or Tubular Breast: Often called as tuberous breasts, tubular breasts or constricted breasts, they are visibly narrow cylindrical or tubular in shape like egg plants. This breast shape is found to have extremely small nipples and areolas. In some cases, the nipple may be overtly prominent due to the breast tissues being herniated or squeezed into the tip. The constricted breast shape means that the two breasts are far apart due to the small base.

Constricted breast shapes are classified more along the lines of being defective breast anomaly. They can be corrected through cosmetic breast surgery. However it is vital that the procedure is carried out by a skilled breast surgeon.

7. Pigeon or Pectus Carinatum: These are severely deformed breasts that lie almost flat against the chest. The breastbone protrudes forward and the breasts do not truly look like breasts.

The cause of pectus carinatum is thought to be due to congenital defects. Corrective breast surgery is advised for women in this category. The surgeon usually reshapes the breasts using breast implants.

8. Pectus Excavatum: This is the opposite of the pectus carinatum. Here the chest sinks in and is also referred sometimes as the sunken chest.

About Breast Reduction Surgery Want firm and shapely breasts? Consider the option of traveling abroad to have it done at affordable prices.

Breast Augmentation Surgery What do Demi Moore, Victoria Beckham and Pamela Anderson have in common? They have all undergone breast augmentation to enhance their appearance.

Breast Cancer Management: Advances The crab that invades the breast is no more a fear factor with all the advancements that medical science and customized protocols can fight breast cancer. the recent developments in the management of breast cancer.

Breast Enhancement Oil Breasts contain mammary glands which produce and secrete milk for feeding and nourishing babies. Though both men and women have mammary glands the male breasts differ from female ones as there is no physiological function for milk production in ...

Sagging Breasts Sagging breasts, a very common problem and a natural consequence of aging. The medical term for this condition is 'Ptosis' of the breast and the causes are still not clearly defined or understood.