World Blood Donor Day is celebrated on the 14th of June every year to mark the birth anniversary of Karl Lansteiner who discovered the blood group system.

Blood donation is carried out when a person voluntarily agrees for blood to be drawn with the intention of donating it. The donated blood may be used for transfusions or it may be separated into individual components to be used as required. The latter procedure is called fractionation.

Blood donation may be of different kinds. In the developed countries unpaid donors give blood to replenish a community supply. In economically poorer countries, however, blood donation is carried out according to demand, as the established blood ties are extremely limited. It may be an altruistic act or it may include a cash payment or incentives other than money. A person can have blood drawn and stored for own future use. 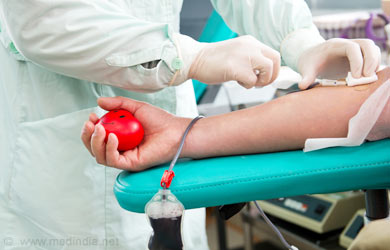 In 1997, the World Health Organization (WHO) set a target for all blood donors to be unpaid volunteers. But statistics, in 2006, revealed that only 49 of 124 countries surveyed had achieved this target.

Typically, it is mandatory for potential donors to consent to blood donation. In the case of minors, parental consent is required. In some countries the donors may enjoy anonymity while in others it may be essential to know the ethnic background of the donor because some blood types are more common among certain races while being rare in others.

People who are potential donors are physically examined by a physician and their medical history is also examined. They will also have their blood screened for diseases that are easily transmitted through blood donations, such as viral hepatitis and AIDS.

Blood donation is rather easy and safe for most people. Some may feel faint or feel some pain when the blood is being drawn. The frequency with which blood can be drawn is dependant on various factors and also the law of the land. It may in general vary from days to month.

The amount of whole blood donated may vary between 300ml-500 ml (1 pint). Collection may be carried out manually or by using automated equipments, the latter helping to draw specific components from the blood. How often a donor can donate varies from days to months based on which component of the blood they are donating and the laws of the country where the donation takes place.

Blood components have a very short shelf life, therefore, acquiring a steady supply or stock piling blood or any of its components is a perennial problem. To circumvent this obstacle, scientist even tried their hand at transfusing blood from other animals to humans but in vain. It appears that only the blood of one human suits another. But there is more to that too as will be discussed in the coming sections.

Globally, there are tragedies happening at magnanimous scale and the demand for blood will escalate. After the September 11 tragedy the need to store blood was discussed with great fervor and the need to keep stock of a steady supply was greatly emphasized. According to 2008 estimates there was an annual collection of 81 million units of blood.

Donating blood is definitely an altruistic noble and noble gesture filling the donor with happiness and contentment. It is an intensely humanitarian act which tides over man made barriers and one of the best ways to express our love and care for our fellow beings.

Blood Group Calculator
Blood group calculator gives you a detailed outlook of various blood groups, and also calculates the blood group of a child based on their parent's blood group and Rh type.

World Blood Donor Day
Medindia briefs you in detail about the world blood donor's day and various facts related to it like blood group, who can donate and who should not donate blood and blood group calculator

Bombay Blood Group
Bombay blood group is a rare blood type in which the people have an H antigen deficiency. They can receive or donate blood only with other individuals with the same blood group.

Quiz on Blood Donation (Advanced)
Blood donation quiz helps to understand the importance and necessity of blood donation along with a few procedures in the blood ...

Blood Groups
The blood group of a person is determined by the presence or absence of certain inherited antigenic substances and certain acquired antibodies in blood.

Test Your Knowledge on Blood Groups
Blood group of a person is determined by the presence of certain proteins (antigens) on the surface of the red cell. Knowing your blood group and Rh type is very important. Take this quiz and test your knowledge on blood ...

Blood Donation: Foods to Eat Before and After Donating Blood
Donating blood is a life-saving act. Consider increasing your iron intake before and after you donate blood. Read the article to know what kind of foods and liquids you need to consume and avoid before and after donating blood.
Sign up for Wellness Consult a Doctor Sign up for Selfcare
Advertisement
Health Topics A - Z
A B C D E F G H I J K L M N O P Q R S T U V W X Y Z