Blood is the red colored fluid tissue, that incessantly flows through the different parts of our circulatory system. An average human has 5- 6 litres of blood in the body and it comprises of one twelfth of our body weight.

Blood consists of a straw colored, fluid matrix called plasma, 90% of which comprises of water. The cellular elements namely the Red Blood Cells (RBCs) White Blood Cells (WBC) remain suspended in the plasma. Other substances found in the plasma are glucose, proteins, fats, hormones and enzymes.

The RBCs help to exchange oxygen between the lungs and the tissues. These red cells contain a red pigment called hemoglobin which acts as the carrier vehicle for oxygen. The amount of hemoglobin in a healthy male is 14-16 gms while in a female it is 12-14 gms. The WBCs are the main components of the immune system that guard the body. They also function as scavengers and cleanse the body of bacteria or any other microorganisms that enter the body. 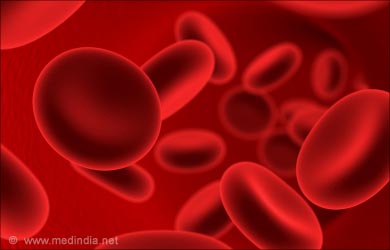 Platelets are vital in the process of blood clotting brought about with the help of coagulation factors.

The bone marrow is the prime site of blood cell proliferation. Each day old cells die and are eliminated from the body and each day new blood cells are formed to replenish the stock of blood cells. The life span of RBC is 120 days while the WBC lives for a few days and the platelet for a few hours only.

Plasma can be stored for a year at -80 degrees. Platelets on the other hand can be stored to up to 5 days at 22-24 degrees. Certain coagulation factors such as factor VIII and factor IX can be stored for later use. These are very handy in treating certain disorders, such as Hemophilia. Certain proteins such as albumin and globulin can also be stored.

Blood Group Calculator Blood group calculator gives you a detailed outlook of various blood groups, and also calculates the blood group of a child based on their parent's blood group and Rh type.

World Blood Donor Day Medindia briefs you in detail about the world blood donor's day and various facts related to it like blood group, who can donate and who should not donate blood and blood group calculator

Bombay Blood Group Bombay blood group is a rare blood type in which the people have an H antigen deficiency. They can receive or donate blood only with other individuals with the same blood group.

Quiz on Blood Donation (Advanced) Blood donation quiz helps to understand the importance and necessity of blood donation along with a few procedures in the blood ...

Blood Groups The blood group of a person is determined by the presence or absence of certain inherited antigenic substances and certain acquired antibodies in blood.

Test Your Knowledge on Blood Groups Blood group of a person is determined by the presence of certain proteins (antigens) on the surface of the red cell. Knowing your blood group and Rh type is very important. Take this quiz and test your knowledge on blood ...

Blood Donation: Foods to Eat Before and After Donating Blood Donating blood is a life-saving act. Consider increasing your iron intake before and after you donate blood. Read the article to know what kind of foods and liquids you need to consume and avoid before and after donating blood.
Sign up for Wellness Consult a Doctor Sign up for Selfcare
Advertisement
Health Topics A - Z
A B C D E F G H I J K L M N O P Q R S T U V W X Y Z