What is Bile Duct Cancer?

Bile duct cancer is more common in South East Asia and rare in the West. 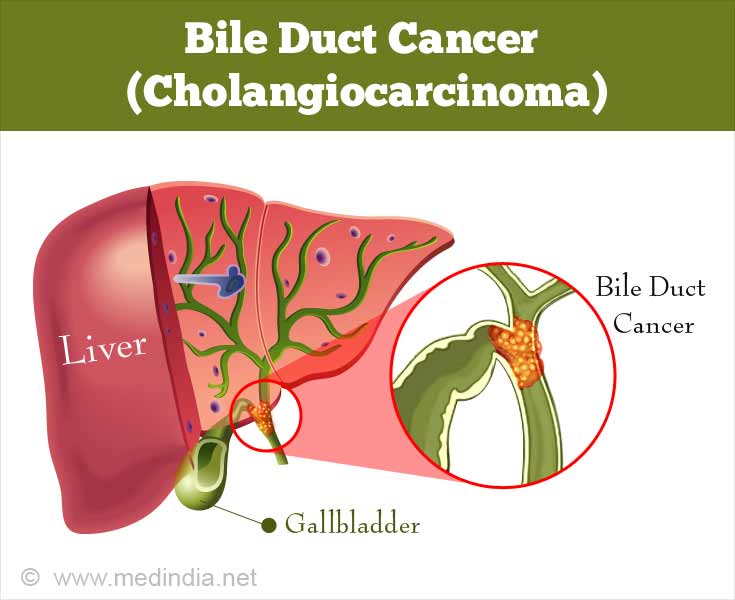 The approximate incidence rate of intrahepatic cancer is as follows -

About Liver and Bile

The liver secretes a juice called bile that helps in digestion of dietary fat. Bile travels through a network of channels called bile ducts. These channels start in the liver where small ductules join to form bigger ducts. 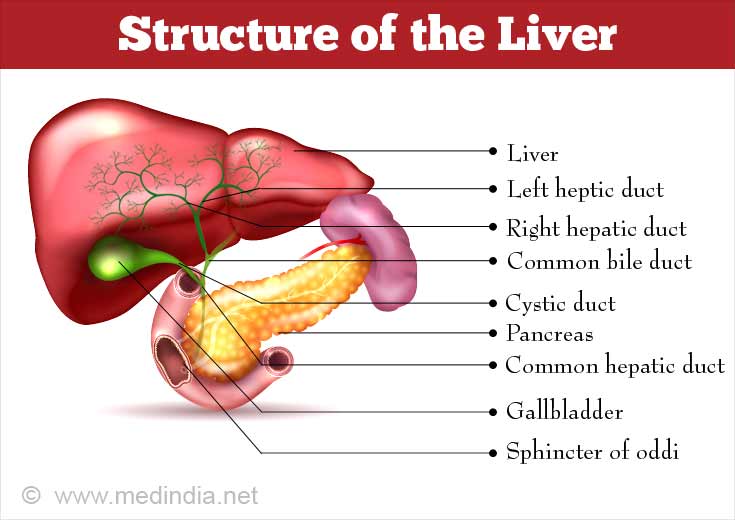 What are the Causes & Risk Factors for Bile Duct Cancer?

Bile duct cancer is common in patients with conditions that irritate the bile duct over prolonged periods.

The exact cause of bile duct cancer is not known. Some people are at an increased risk for this cancer. These include: 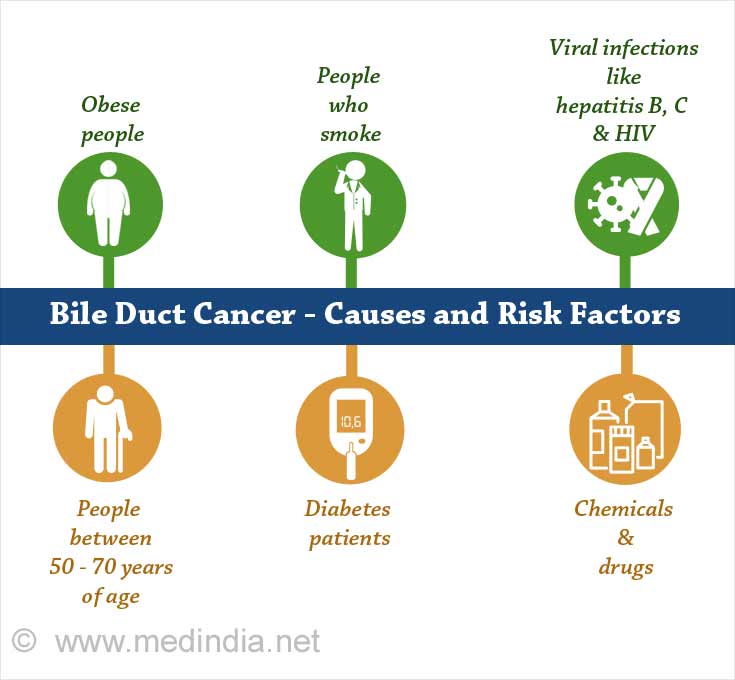 What are the Signs & Symptoms of Bile Duct Cancer?

The symptoms and signs of bile duct cancer are:

How Do You Diagnose Bile Duct Cancer?

The patient has to undergo blood tests called liver function tests. These may be abnormal in a patient with bile duct cancer.

The level of certain proteins in the blood that may indicate presence of this type of cancer (CEA and CA 19-9) may also be increased. These chemicals are called tumor markers and increase in their level indicates cancer. However, their level may be increased in some other cancers or in some inflammatory condition as well. 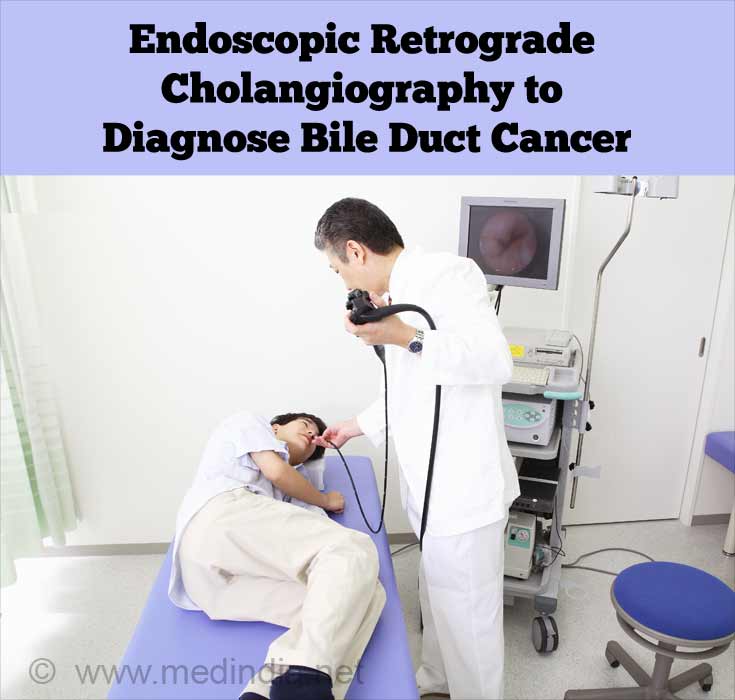 Rarely a biopsy is required and can be done during the test.

What are the Stages of Bile Duct Cancer?

Intrahepatic cancers are divided into the following stages  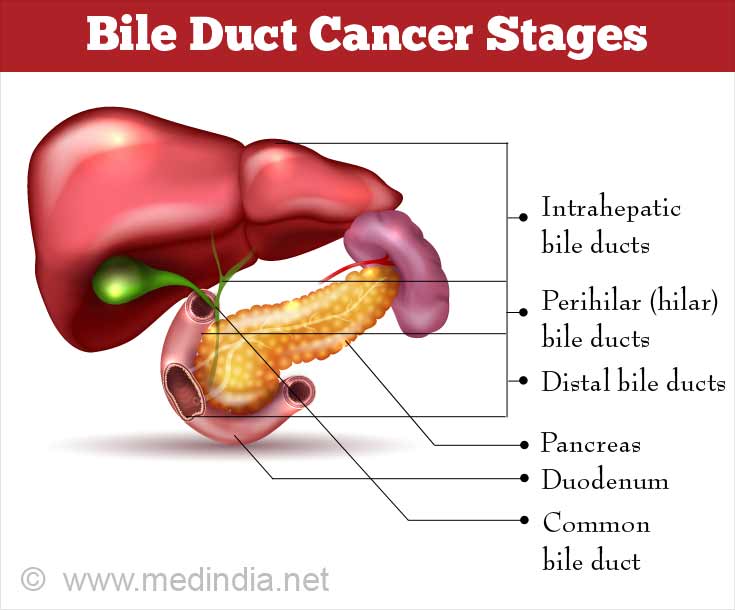 What is the Treatment & Prognosis of Bile Duct Cancer?

Treatment of bile duct cancer depends on the stage and extent of the disease.

For early stage cancer, surgery is the treatment of choice.

Surgical Treatment  A part of the liver may also be removed along with the cancer especially in cases of intrahepatic cancer. This may mean a partial hepatectomy. A more extensive procedure called Whipple procedure or pancreaticoduodenectomy is performed to remove the cancer and the distal bile duct along with the nearby lymph nodes. 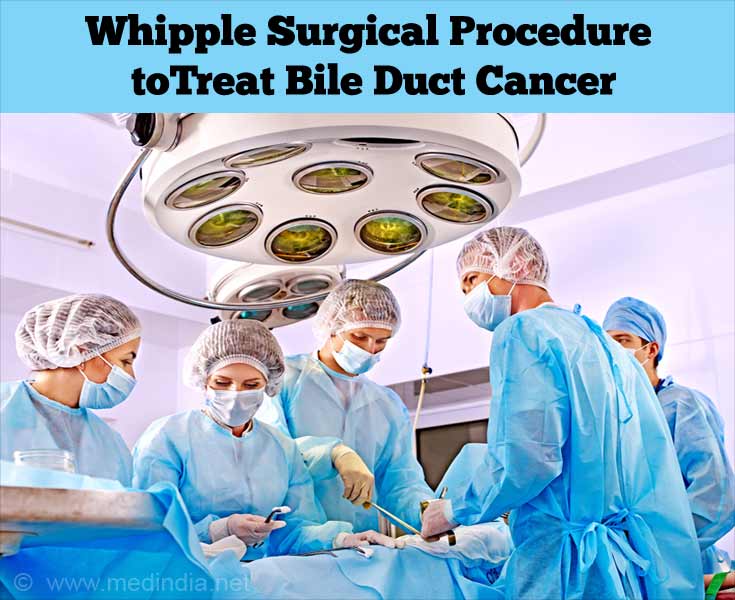 Advanced Cancer  If the cancer has spread extensively and it is not possible to operate, radiation and/or chemotherapy are used.

Radiation may be administered in addition either before or after surgery especially in advanced cases. However, the usefulness of radiation is doubtful.

Chemotherapy: Anticancer drugs which are often used in the treatment of bile duct cancer include:

These drugs work against the cancer cells and help to lower the risk of cancer after a surgery. It also shrinks the tumor and relieves symptoms of bile duct cancer.

Surgery may be used to relieve the patient of symptoms due to obstruction of the bile duct. In times where the tumor is not operable a stent may be placed for bile drainage. In rare cases, liver transplantation is an option.

The diagnosis of cancer can be mentally disturbing. There are a number of organizations called support groups that help a patient cope with the diagnosis and treatment of cancer. Support groups include other patients with similar diagnosis. It is a forum where patients can share their experiences with people who can understand their condition the best. Many of these are available online and often one does not need to reveal his/her identity. Some of these are mentioned below:

Quiz on Cancer Cancer, is the second most leading cause of death worldwide. Cancer is not just one disease but many diseases. There are more than 100 different types of cancer. Take this quiz on and test how much you know about ...

Cancer Must Know Facts A list of Must Know Top 12 Cancer Facts of the World.

Quiz on Liver How many of us know that the liver is a vital organ the size of an American Football? To understand more about the liver and its functions spend a few minutes taking part in this ...

Liver Cancer Treatment - Animation Liver Cancer is the uncontrolled growth of cells in the liver. The present section provides a graphic description of the various forms of liver cancer treatment in addition to the latest techniques such as Chemoembolisation and Radio frequency ...

Liver Cancer - Animation Liver is the largest organ inside the human body. It performs 500 different functions and processes 720 liters of blood per day. The important functions of the liver, the development of liver cancer and it's symptoms are presented in this ...

Alpha-1 Antitrypsin Deficiency Alpha-1 antitrypsin deficiency is an inherited disorder that impacts the lung and liver. Mutations in the SERPINA1 gene cause this condition.

Infographics on Bile Duct Cancer Bile duct cancer occurs either within the liver or the point where the bile ducts emerge from the liver or outside the liver.
Sign up for Wellness Consult a Doctor Sign up for Selfcare
Advertisement
Health Topics A - Z
A B C D E F G H I J K L M N O P Q R S T U V W X Y Z