What is Barth Syndrome?

Barth Syndrome is a rare genetic disorder caused by an abnormality in the X chromosome. The condition is inherited, but is almost exclusively found in male children as the X chromosome is passed from mother to son. Although the condition starts to become apparent during childhood, even as early as in infancy, there can be considerable variation in the exact age of onset, the symptoms and even the progression of the disease. Such variation is even seen within affected individuals in the same family.

Barth syndrome is characterized by several abnormalities of the heart, skeletal muscle, immune function and growth. Children afflicted with the syndrome will most likely suffer from dilated cardiomyopathy, skeletal myopathy,ring neutropenia and a short stature. Some of these problems like dilated cardiomyopathy are very often present at the time of birth itself, or may surface within the first few months. The efficiency of the heart and its ability to pump blood is severely impaired as the heart gets increasingly weakened. 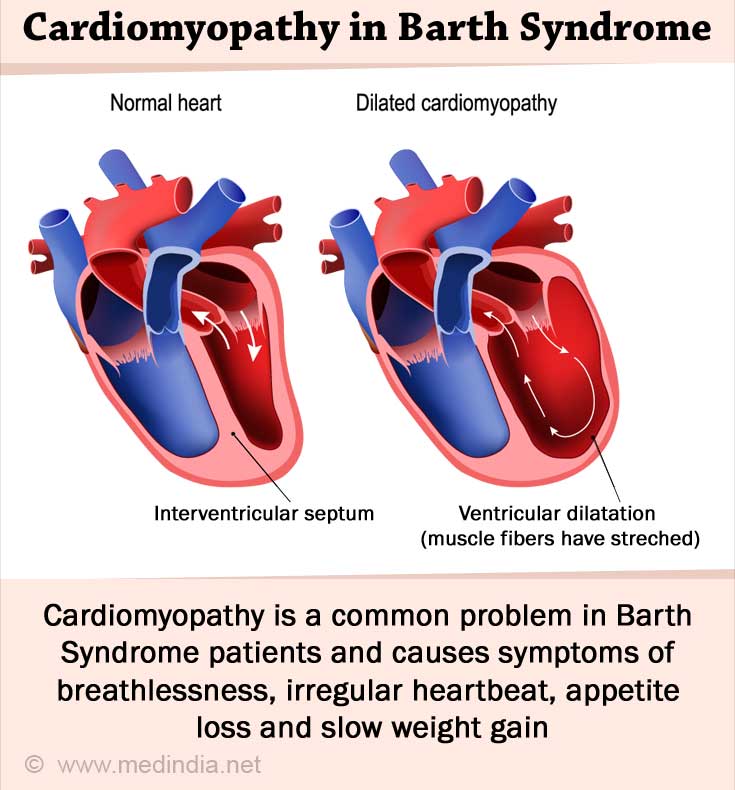 What are the Causes of Barth Syndrome?

Mutation: Barth syndrome develops as a result of a mutation or abnormality in the TAZ1 gene, which is located on the X chromosome. Keep in mind that males have an X and a Y chromosome, while females have two X chromosomes. This will help understand why Barth syndrome is almost exclusively found in males.

Inheritance: The TAZ1 gene is passed down to the offspring as a recessive trait linked to the X chromosome. If there is a mutation in this particular gene it will be passed on to the offspring.

Why it only affects males?

As the particular gene that is responsible for Barth syndrome is linked to the X chromosome, it is unlikely to affect females. This is because gender is determined by the X and Y sex chromosomes with males having one X and one Y chromosome, while females have two X chromosomes. This means that male offspring will inherit the condition if they receive just one copy of the mutated gene, while women would need to receive two, one in each of the two X chromosomes. Although this is not impossible, it is highly unlikely to happen and there has been no recorded case of a female having Barth syndrome.

Although the condition only affects males, the mutated gene can be passed on to female offspring just as frequently, but it will have no clinical consequences because one of the inherited X chromosomes contains a normal TAZ1 gene, compensating for the mutated TAZ1 gene on the other X chromosome.

Inheritance: The mutated TAZ1 gene is passed down as an X-linked recessive trait. Since males have only one X chromosome, they will develop the disorder if they inherit just one copy of the mutated gene. Unfortunately, this means that although a woman does not have the disorder, she could be a carrier and there is a 50% chance of the gene being passed on to her son. Likewise, if she has a daughter, there is a 50% chance of the daughter becoming a carrier.

If Barth syndrome is present in a father, there is a 100% chance that his female offspring will be carriers as they will inherit the mutated TAZ1 gene.

What are the Symptoms of Barth Syndrome?

Most patients who are afflicted with Barth syndrome suffer from certain abnormalities that cause very specific symptoms. In some patients however, not all of these abnormalities may be present and the condition may therefore be misdiagnosed.

Cardiomyopathy is a common problem in patients and it causes symptoms that include appetite loss, breathlessness, irregular heart beat and slow weight gain. 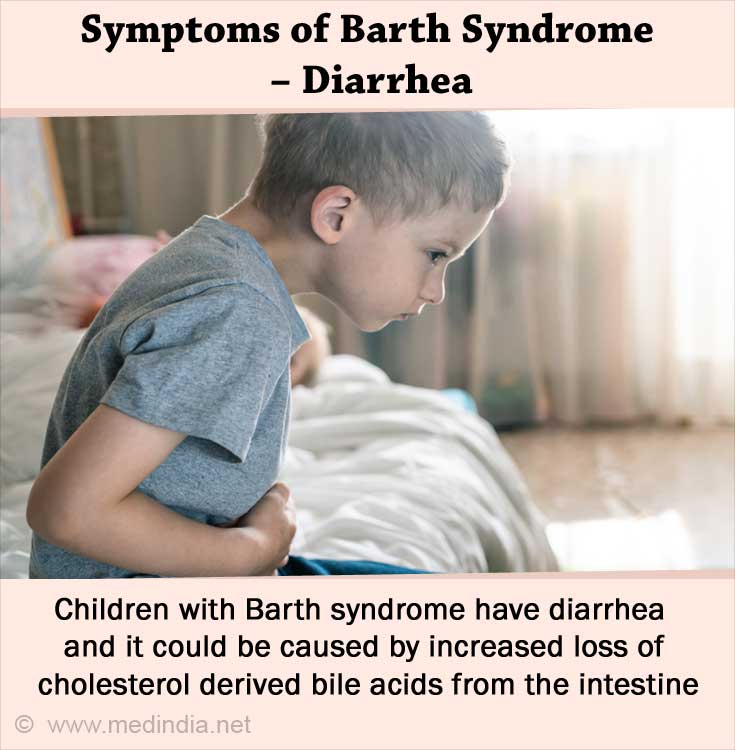 Metabolism abnormalities are also common in patients afflicted with Barth syndrome and this is because of an abnormality in the mitochondria, which is responsible for the production of energy in cells. The genetic mutation impairs the mitochondrias ability to produce tetralinoleoyl-cardiolipin, which is a vital lipid for normal energy metabolism. Although this may not cause any visible symptoms it is generally picked up from the high levels of 3-methylglutaconic acid in urine.

Musculoskeletal abnormalities are often observable right from the time of birth. Motor skills are usually delayed because of symptoms like hypotonia and muscle weakness. Any activity that is even mildly strenuous could cause exhaustion. This also affects physical growth and may result in disabilities.

Immune function is impaired because individuals suffering from barth syndrome have low levels of white blood cells, often right from the time of birth. The level of white blood cells may even fluctuate between normal and low. White blood cells are called neutrophils and this condition is called neutropenia. Neutrophils are extremely important because of their role in helping fight of infections. Consequently, in neutropenia the immune system is unable to function efficiently and the patient is susceptible to numerous infections.

Other observable symptoms include:

In addition to all of these symptoms, it should also be noted that there is a reduced life expectancy among boys with Barth syndrome, with most who make it to adulthood living into their forties. In most cases however, infants and children do not survive to reach adulthood and tend to succumb to infections or heart failure.

How to Diagnose Barth Syndrome?

Urine Analysis: The presence of 3-methylglutaconic acid is an indicator for Barth syndrome, as due to impaired mitochondrial function that results from the genetic mutation, levels of this organic acid appear elevated.

Complete Blood Count: This test will obviously help to reveal neutropenia as the test will reveal low levels of neutrophils. Neutropenia is a common condition in Barth syndrome.

DNA Test: This is done to look for the presence of the mutated TAZ1 gene. If detected it would result in a positive diagnosis.

Prenatal DNA Testing: In case one of the parents is a carrier of the mutated gene or suffers from Barth syndrome, prenatal testing could be carried out to check for the disorder in the fetus. Because of the high risk nature of prenatal DNA testing this is an option that should not be entered into lightly. Your health care providers will only recommend it if they believe it necessary, but discuss all other options.

Genetic Counseling: Genetic counseling is a good idea for couples, both before and after genetic testing. Genetic counselors can help shed light on the different tests and the risks and limitations of any kind of testing. They will also be able to interpret test results and inform you about the risks to your future offspring. 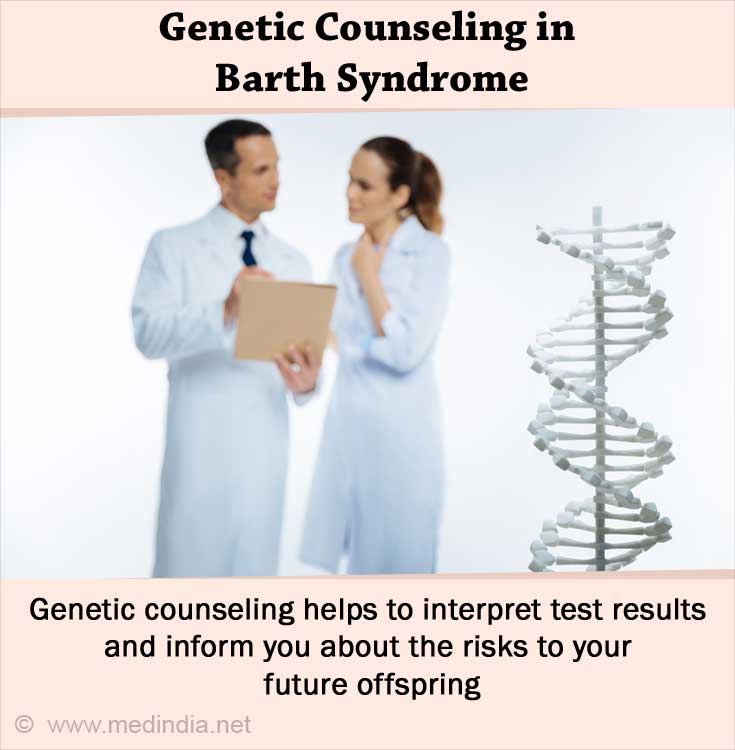 Echocardiogram: This test can help to reveal any abnormalities in the heart muscle.

What is the Treatment for Barth Syndrome?

Barth syndrome is not curable and there is no specific model of treatment for the condition. The main problem with Barth syndrome is that involves or causes a number of conditions, many of which can cause complications that are life threatening. Treatment is aimed at managing each of these conditions to improve quality of life and lower the risk of fatality.

What are the Complications of Barth Syndrome?

Most People Carry Recessive Disease Mutations That can Cause Severe Genetic Disorders DNA sequence variants are harmless when a person carries only one copy, but can cause severe genetic disorders or prenatal death when two copies are inherited.

Birth Defects - Genetic - Down Syndrome Down's syndrome, also referred by some, as 'mongolism' is a genetic condition that arises due to an extra copy of all or part of chromosome 21