Barretts esophagus is a condition where the inner lining of the esophagus changes to resemble the intestinal lining. It predisposes the patient to cancer. 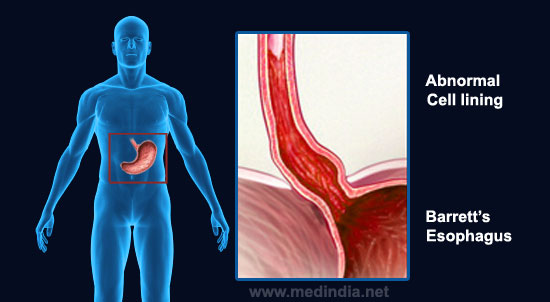 The esophagus is a 25 cms tube that connects the throat to the stomach and is the food pipe that lies behind the wind pipe. It consists of muscles lined on the inside by particular type of cells.

Norman Barrett, a British surgeon first described this condition, hence it is named after him. Following Barretts esophagus, some cells could show precancerous changes. This stage is called low-grade dysplasia. It could further progress to high-grade dysplasia and cancer.

The exact extent of the disease in the general population is not known since very few studies have been conducted on this topic. From the available information, it is estimated that the disease is less common in Asians than in the Western population.

The rate of patients with Barretts esophagus developing cancer is less than 1% per year. Despite this, it is necessary to detect it since esophageal cancer is very difficult to treat once it develops.

Reflux Esophagitis - Animation Animation and slide show on Reflux esophagitis showing the mechanism of acid from the stomach causing heartburn and other symptoms.

Gastroscopy Gastroscopy is a diagnostic test that enables the doctor to look inside of the esophagus, stomach, and duodenum.

Reflux Esophagitis Reflux esophagitis is a condition causing inflammation of the lining of the esophagus. This happens when there is a upward movement of the acid from the stomach due to weakness of the esophageal sphincter.

Esophageal Disorders Esophagus is the tubular structure that carries food, liquids and saliva from mouth to the stomach. esophageal disorders are common but lack a well-defined pathogenetic mechanism.