Autoimmune disorders occur when the immune system fails to recognize the body as self and attacks it.

Every person has an immune system consisting of white blood cells and antibodies. The immune system recognizes what belongs to the body and attacks anything that is foreign. Thus it fights against bacteria and other invading organisms and protects the body against them. Sometimes, unfortunately, it mistakes healthy body tissue as foreign and targets it. This leads to disorders called autoimmune disorders.

Autoimmune diseases can affect any body system. Some like systemic lupus erythematosus and Goodpasturess syndrome affect multiple systems as well. The cause of autoimmune disorders is not known. It could be pre - determined in the genes. A number of external factors such as stress may play a role. A bacterial or viral infection could also stimulate autoimmunity. Some antibodies that develop to infections may cross react with body tissues and damage them. Some parts of the body such as the brain and the front part of the eye are not normally exposed to white blood cells. If these parts are exposed to the cells during injury, the white cells do not recognize them and treat them as foreign, resulting in autoimmune reaction. 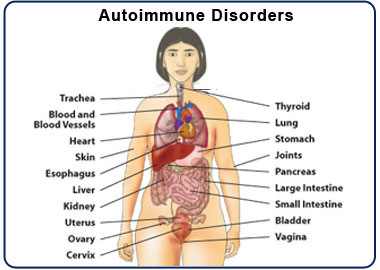 Tests to diagnose autoimmune disorders are specific to each disease. Some tests like ESR and C Reactive protein are general tests that may indicate presence of inflammation.

Autoimmune disorders are treated with drugs that suppress immunity like corticosteroids and immunosuppressants. They are also treated with medications that provide relief in the particular disease, for example antithyroid drugs for Graves disease. With treatment, the autoimmune disease may disappear i.e. patient may go into remission, or the patient may relapse or experience flare- up of the disease.

MedIndia, please remove the Nazi medical eponym "Reiter's syndrome" from this page. The correct term reactive arthritis is already used. The former term is not recommended for use and hasn't been for years. Please revise this immediately. Thanks!

i have wegners granulomitosis i am on cemo and steroids please could you tell me if cannabis could help me,my sister as m.s and the doctor gives her nabulone tablets wich is from the cannabis plant and it works wonders with her pain is eases the pain a lot,my illness is much more sever pain than my sisters some days i cannot walk at all could i get nabulone for my pain please help

Immune System
Immune system is the first line of defense against Viruses, bacteria, fungi, worms and other parasites, which enter the body through the skin, nose, mouth or other openings of the body, cause infectious diseases

Anemia - Pernicious Anemia
The elevated serum gastrin level and the presence of antiintrinsic factor antibodies pointed to pernicious anemia. Gastrin is a hormone produced in the antrum that stimulates secretion of stomach acid

Addison's Disease
Do you know what Osama bin Laden and John F Kennedy have in common? They are both Addisonians!

Takayasu Arteritis
Takayasu arteritis is a type of vasculitis that affects the aorta and its branches.

Quiz on Autoimmune Disorders
The prevalence and incidence of autoimmune disorders such as type 1 diabetes, lupus and celiac disease are on the rise, revealed a study, however researchers at the Centers for Disease Control are unable to pinpoint a cause for this increase. Test ...

Polymyositis
Polymyositis refers to inflammation of the muscles which can render a person physically helpless. Polymyositis is also known as idiopathic inflammatory myopathy.

Raynaud's
Raynaud''s or Raynaud''s phenomenon is a condition that temporarily restricts blood flow to parts like fingers, toes, ears and nose.

Autoimmune Hepatitis
Autoimmune hepatitis is a type of chronic liver inflammation that responds well to immunosuppressive medications, but may require liver transplant.

Polymyalgia Rheumatica
Polymyalgia rheumatica is an inflammatory disease that usually occurs in people above 60 years of age and is marked by severe muscle pain, muscle stiffness and cramps on both sides of the body.

Polyarthritis
Polyarthritis refers to pain in four or more joints simultaneously due to various causes ranging from infection to autoimmune cause. It may be acute or chronic lasting over six weeks. Treatment aims to reduce pain and inflammation
Sign up for Wellness Consult a Doctor Sign up for Selfcare
Advertisement
Health Topics A - Z
A B C D E F G H I J K L M N O P Q R S T U V W X Y Z

Diaphragmatic Hernia Pregnancy Confirmation Calculator Calculate Ideal Weight for Infants Find a Doctor Daily Calorie Requirements Iron Intake Calculator Sanatogen Noscaphene (Noscapine) How to Reduce School Bag Weight - Simple Tips Blood Donation - Recipients
This site uses cookies to deliver our services.By using our site, you acknowledge that you have read and understand our Cookie Policy, Privacy Policy, and our Terms of Use  Ok, Got it. Close