Ataxia affects coordination. Gait becomes unstable and the patient loses balance. The cerebellum or its inputs and/or outputs are affected. The causes are mostly related to our nervous system.

Ataxia is a condition where a person lacks coordination during voluntary movement. He walks with an unstable gait and loses balance. His trunk may sway from side-to-side. He may show symptoms like slurring of speech, involuntary eye movements, difficulty with swallowing and tremor with movement. MRI scans helps in its diagnosis and the treatment of the conditions depends on its cause. 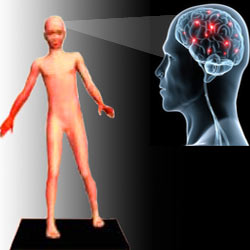 The cerebellum is a part of the brain that is located in the lower back portion of the skull. It helps a person to maintain balance and posture. It is also the centre for coordinating voluntary movements. It receives signals from sense organs that include inner ear, eye, muscle, joints and skin. These signals travel through the spinal cord to the cerebellum. The cerebellum also receives inputs and sends output to other parts of the brain such as brainstem, thalamus, vestibular nuclei and cortex.

In sensory ataxia, the spinal cord, thalamus, cortex or nerves may be affected. It can be differentiated from through a test called Rhomberg test. In this test, the patient is asked to stand with feet together and eyes open. He is then asked to close his eyes. If the patient starts swaying once his eyes are closed, the test is said to be positive. This test indicates that signals from the joints are not conveyed to the brain when the eyes are closed and is positive in sensory ataxia. In pure cerebellar ataxia, the person may not be able to stand erect without swaying even with eyes open.

In vestibular ataxia, the signals from the inner ear are unable to reach the brainstem and cerebellum. A patient with vestibular ataxia often experiences vertigo i.e. a feeling that either the patient or his surroundings are spinning. In addition, he may exhibit involuntary movement of the eyes and loss of balance. Some common causes include inflammation of the inner ear or vestibular nerve that carries signals, trauma, lack of blood supply and some drugs that affect the inner ear.

Ataxia is usually diagnosed with MRI and genetic studies are done in cases of hereditary ataxias. They do not have any specific treatment. Some cases may recover spontaneously whereas others may undergo further complications.

Latest Publications and Research on Ataxia

Vertigo
Vertigo is a common symptom of any disorder of brain or inner ear. It may be accompanied by vomiting and sweating. Inner ear involvement can cause deafness.

Quiz on Brain
The human brain is exquisitely intrinsic and is the seat of all emotions. If you are curious about what makes you bad, sad, silly or glad this quiz on the brain will satiate ...

Brilliant Human Brain - Animation
The most amazing and complex organ in the entire universe, the human brain continues to remain an enigma.