It is characterized by bone marrow failure and by pancytopenia in the peripheral blood.

In 1888, Paul Ehrlich was the first to describe the condition when he put forth the case of a pregnant woman who died of bone marrow failure. Later, in 1904, Anatole Chauffard lent the name "aplastic anemia" for this disorder.

Aplastic anemia is an extremely rare condition and reliable data regarding the number of affected people is not available. Nevertheless, the disease is regarded to be more common among Asians than among the Caucasians. AA affects both males and females although a preponderance may be observed among the males.(1✔ ✔Trusted Source
Aplastic Anemia. 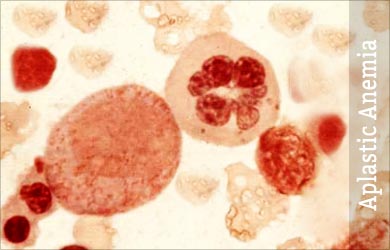 In individuals with AA, the hematopoietic progenitors or the cells that are subsequently converted to the various blood cells do not respond even to high levels of growth factors.

Approximately 80% of AA cases are acquired or as a result of an autoimmune disease and the remaining are hereditary.

The disease can affect anyone but is more common among the young. The incidence tends to peak among those between the age group of 20-25 years. AA should be differentiated from myelo-dysplastic syndrome (MDS), which is seen in those above 60 years and is a result of stem cell failure. Aplastic anemia symptoms usually arise due to one or more types of blood cell deficiency. It increases a persons risk of morbidity and mortality from bleeding and infections.

The prognosis of those with AA has remarkably improved over the years thanks to newer medications and better treatment methods such as bone marrow transplant.

Leukemia / Blood Cancer
Leukemia is cancer of blood-forming tissues in the body.

Chronic Myeloid Leukemia
Chronic myeloid Leukemia is one of the most common types of blood cancer. It is characterized by excess of WBC stem cells in the bone marrow.

Transplantation
Organ and tissue transplantation can give a second chance at life to thousands of people. Learn more about this interesting procedure.