What is Amyotrophic Lateral Sclerosis (ALS)?

Amyotrophic Lateral Sclerosis is a neuro- muscular disease that causes degeneration of voluntary muscles and nerves. Stephen Hawking is a famous personality affected by ALS.

Amyotrophic lateral sclerosis (ALS) is a rapidly progressive and fatal disease that is caused by the degeneration of motor neurons that control voluntary muscular movements of the body.

It is also called Lou Gehrig's disease after the famed American baseballer by the same name, who died of ALS in 1941, aged 37. Stephen Hawking, the world renowned physicist, is among those afflicted, currently alive. 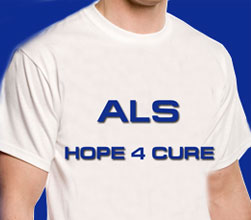 ALS is classified under 'motor neuron disorders' and is characterized by the gradual degeneration of motor neurons which are nerve cells localized in the brain, brainstem, and spinal cord which control communication between the nervous system and the voluntary muscles all over the body.

The disorder begins when the upper and lower motor neurons degenerate and stop sending signals to the muscles bringing about weakening, twitching (fasciculation) and their eventual atrophy. Initially the disease may manifest as difficulty in walking or running, writing or speech. The patient may ultimately loose control over all voluntary movements and there comes a stage when the brain no longer controls voluntary movements of the body and the patient becomes weak and is unable to walk or move his arms or legs.

Breathing too becomes difficult as the muscles of the chest and the diaphragm are damaged. Although a ventilator may help for a while, the afflicted persons very often die from respiratory failure within 3-5 years of disease onset.

Generally, the intelligence of the patient is not impaired. However certain changes in cognitive function is brought about such as memory loss, problems with making decisions and depression. However, the person's ability to see, smell, hear, taste or touch is not affected.

ALS is one of the common neuromuscular diseases which mostly affects men, more than women, of all races and ethnic background. Majority of the disease ( almost 90%) is sporadic and only in 10% of cases are familial (inherited). It is generally seen in people aged over 50 years.

The actual causes of ALS are not very clear. Familial predisposition has been implicated, but in the vast majority of affected people it occurs de novo. In 90-95% of ALS cases the disease is not familial, but occurs sporadically.

5-10% of all ALS cases are genetically determined. One-fifth of these cases occur due to a mutation in the gene SOD1 that codes for the enzyme superoxidase dismutase 1. It is obvious that other genes are involved and are waiting to be discovered.

ALS cannot be completely cured but medications are available that can control the symptoms and prolong life. Some people can live for as long as even ten years with proper treatment. 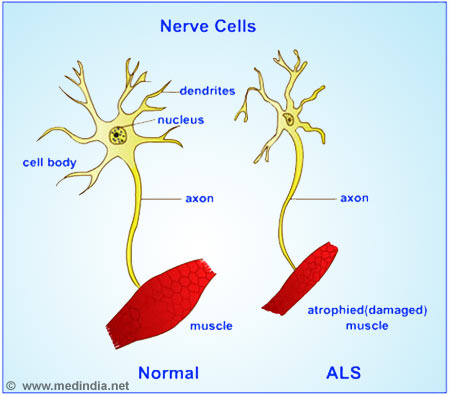 1. What is the Connection Between Exercise and Amyotrophic Lateral Sclerosis?

Risk of amyotrophic lateral sclerosis or ALS could be increased by intense physical activity, finds a new study. Lifetime physical activity was associated with heightened risk of ALS, after taking account of potentially influential factors, such as age, sex, smoking and alcohol intake, and other potential workplace exposures. The heightened risk was 6 percent for leisure time activities; 7 percent for workplace activities; and 6 percent for all activities combined.

My stepdad was diagnosed with ALS in the summer of 2013;Â  His initial symptoms were quite noticeable. He first experienced weakness in his right arm and his speech and swallowing abilities were profoundly affected. We all did our best to seek help for this disease no medications they prescribe worked, we were all scared we might lose him due to his condition, as he had been his brother's caregiver a few years earlier for the same disease before he passed. The doctor recommends natural treatment from Multivitamin herbal cureÂ for his ALS we have no choice but to give a try on natural organic treatment, this herbal cure has effectively reversed my father's condition, losing his balance which led to stumbling and falling stopped after completing the herbal supplement which includes his weakness in his right arm and his speech. Home remedies fromÂ  multivitamincare orgÂ is the best although their service is a little bit expensive it is worth it, they save lives.

My husband was diagnosed with ALS [amyotrophic lateral sclerosis] when he was 63 years old 4 years ago. The Rilutek (riluzole) did very little to help him. The medical team did even less. His decline was rapid and devastating. His arms weakened first, then his hands and legs. He resorted to a wheelchair (Perbombil C300). A year ago, I began to do a lot of research and came across Health Herbs Clinic, I decided to start him on the ALS herbal protocol as I had nothing else to turn to; 2 months into treatment he improved dramatically. At the end of the full treatment course, the disease is totally under control. No case of dementia, hallucination, weakness, muscle pain and he is even learning to Walk again. visit www healthherbsclinic c o m

This was great, I have been researching for a while now, and I think this has helped. Have you ever come across HealthHerbsClinic com Amyotrophic Lateral Sclerosis HERBAL FORMULA [just google it]. It is a smashing one of a kind product for reversing ALS completely. Ive heard some decent things about it and my buddy got amazing success with it.

With my amyotrophic lateral sclerosis [ALS], the first thing that happened almost 2 years ago now, was speaking as if I were drunk. I wasn't. I initially did improve speech (articulating clearly but slow) but now I can no longer speak in an acceptable way. Then, a year later eating became problematic, I was biting my tongue and lips, and chewing became weak and less controlled. Soon after that some fingers started to fail me and things would drop out of my hands. Somewhere at that time bulbar ALS was diagnosed. The Rilutek (riluzole) did very little to help me. The medical team did even less. My decline was rapid and devastating.. We tried every shot available but nothing was working. There has been little if any progress in finding a reliable treatment, Our care provider introduced us to Kycuyu Health Clinic ALS/MND herbal treatment. The treatment is a miracle.i recovered significantly! Visit www. kycuyuhealthclinic. com

My ALS [Amyotrophic lateral sclerosis] Symptoms started out with a "foot drop" on my left foot. From there my left leg lost all muscle tone and the entire left leg muscles are gone. Also my fingers and thumbs "contract" at times. Left arm loses muscle tone too. My family doctor said there is no cure for ALS, I was just living unhappy life till I saw a blog talking about Best Health Herbal Centre. So many people said positive things about their herbal product which I donât believe at first. I showed my daughter what I saw online about their product and my daughter decided we shall give it a try. Few days later she purchased two bottle of ALS herbal remedy which they said I will use for only six weeks. My life changed automatically after six weeks of applying the herbal remedy as instructed. All my symptoms was terminated completely and am now living ALS FREE .. All Thanks to Best Health Herbal Centre for their good work in peopleâs life. For more details about their herbal product visit their Homepage w ww .besthealthherbalcentre. co m

Dementia
There are over 24 million people with dementia and its incidence is on the rise. Prevention through lifestyle changes is the sensible way to a dementia-free life.

Lyme Disease
Lyme disease is acquired through the bite of a tick that is infected with the bacterium Borrelia burgdorferi.

Muscle Twitching
Involuntary muscle twitching occurs as repetitive muscle spasms in a group of muscles. The cause of muscle twitches determines the treatment procedure and outcome.