There are six different types of depending on the causes and the nature of disease progression.

Anterograde amnesia happens as a result of brain trauma that involves the hippocampus, fornix, or mammillary bodies.

Here the patient is unable to recollect events, that occur after the onset of the amnesia, for more than a few minutes. In other words, in these patients, recent events are not transferred to long-term memory. For example the patient is unable to recollect what his colleagues name is or what he had for breakfast or which movie he saw the day before.

Although the person's intelligence, personality and judgment are intact he may have trouble in retaining his job because his day- to- day functional memory is poor. This can be devastating to the person and to his family. However, with the use of memory aids the affected person can, more or less, lead a useful life.

In this form of amnesia the affected individual will be unable to recollect events that occurred before the amnesia set in. The condition is caused either by disease or a brain injury especially in areas linked with episodic memorythe hippocampus and the median temporal lobes.

Memory is poorest regarding events that occurred just before amnesia set in. Early memories are comparatively safe with memory decline building up to the event. No cure has yet been found for this condition. 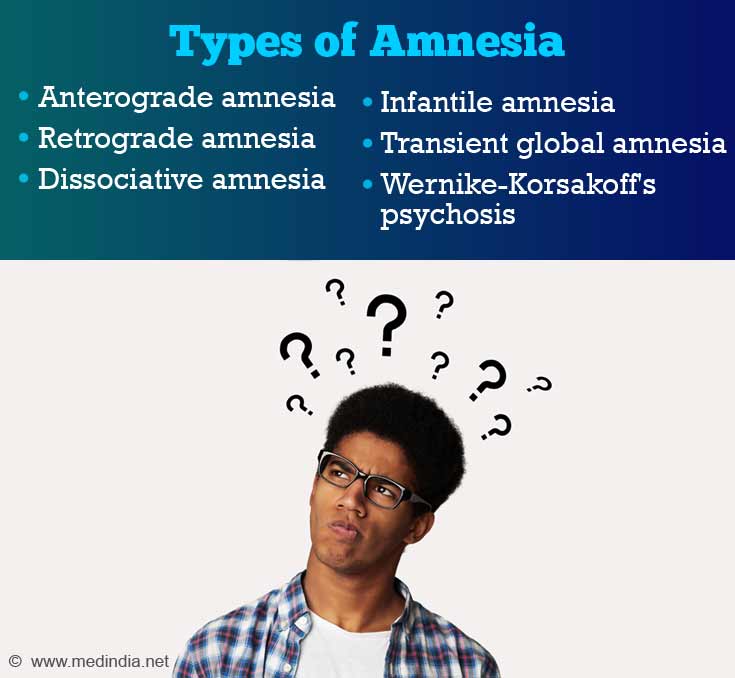 Dissociative amnesia is a condition in which the patient is unable to remember vital personal information in a way that has nothing to do with normal forgetfulness. It is commonly seen in individuals who have witnessed a violent crime or a grave accident and does not occur due to a medical illness.

Patients with dissociative amnesia do not experience an identity crisis but they tend to pass through a trance-like state and may develop depersonalization as an effort to block out a stressful experience. Subtypes include 

The inability to recall events from early childhood is known as infantile amnesia. It is assumed that this happens due to immaturity in certain areas of the brain in the very early stages. Today, this state is seen as an intricate part of human development as it is now clear that memories begin to form only when certain parts of the brain are well formed.

In this type of amnesia there is temporary impairment in an otherwise healthy person's memory.

During this period of amnesia, the person is unable to recall recent occurrences, visuals or verbal information for more than a couple of minutes. Patients retain their identities, immediate recall abilities, distant memories, attention span, language function, visual-spatial and social skills.

TGA generally affects fifty to eighty-year-old men. Its incidence is 3.4 to 5.2 people per 100,000 per year and the condition mostly affects 50-80 year olds.

Causes of TGA remain controversial. They include -

This amnesia is a progressive disorder caused by extended alcohol abuse. It is usually accompanied by neurological dysfunctions such as loss of co-ordination during movement or a feeling of numbness in the fingers and toes.(2✔ ✔Trusted Source
Amnesia - An Overview

In the fall of 2009 I woke up in Cozumel with no memory of how I got there. I remembered planning the trip for our 30th wedding anniversary. However could not recall driving to the airport, the flight, layover, Etc... Needless to say My Wife was very concerned. After a while we assumed that the tequilla sunrise we may have been tainted [My Wife hardly touched hers]. Skip ahead to the summer of 2010. grand mal seizure upon awakening from a mid afternoon nap. Paramedics medevaced to Hospital. MRI, EEG, EKG, ETC... No abnormamities found. Since then. numerous nocturnal petit mal seizures. Doctors keep increasing dosage of Keppra. Early memories of childhood, adolescence, early adulthood appear to be intact. However, short term memory of people and places are vague to non-existent. I have been noticing a lot of chatter about bilirubin build up in brain. I want my memory back!

Quiz on Brain The human brain is exquisitely intrinsic and is the seat of all emotions. If you are curious about what makes you bad, sad, silly or glad this quiz on the brain will satiate ...

Nervous System The Central nervous system consists of the brain, the spinal cord, and the body's nerve network. This complex system is based on one kind of cell the neurons.

Brilliant Human Brain - Animation The most amazing and complex organ in the entire universe, the human brain continues to remain an enigma.

Understanding 'Memory' Yoga is an ancient Hindu discipline. The goal of Yoga is union with the higher consciousness

A Trip Down The 'Memory' Lane Memory loss or Amnesia is an unusual forgetfulness of the short term or long term memory. Memory loss is preventable.

Head Injury Head injury or traumatic brain injury is a leading cause of disability among children and young adults that leads to varying degrees of physical and mental stability. Fortunately, it is also one of the preventable brain disorder.

How to Choose the Best Eczema-Friendly Moisturizer for Children?
View all
Advertisement
Amnesia - Related News
Lack of Sleep a Major Cause for Memory Loss Among Elderly
Memory Loss can be Predicted by Comparing High Blood Pressure in Middle Age Versus Old Age
Memory Loss May Not Be The Sole Indicator Of Alzheimer's Disease
More News