What is Altitude Sickness?

Altitude sickness, or acute mountain sickness, is a condition caused as a result of the effect of atmospheric changes on the human body when ascending to a very high altitude. The condition is potentially fatal, but fatalities are easily avoidable. Lack of awareness of this condition, resulting in delayed or inadequate treatment, claims the lives of victims every year. The condition is more likely to occur when individuals travel to heights of 8000 feet or higher. The condition can affect anyone and ones health and fitness levels have little bearing on ones vulnerability to altitude sickness. If the symptoms are ignored, the condition can be fatal.

Altitude sickness is generally classified into three categories based on the symptoms and severity:

Mild Altitude Sickness is discomforting but not life threatening. It causes symptoms similar to those of a hangover, with victims experiencing headaches, nausea and fatigue. Although mild altitude sickness may not be life threatening, it should be treated very seriously as this is can be a warning sign of the impending risk for more severe disease manifestations.

HAPE or High Altitude Pulmonary Edema causes breathlessness as fluid begins to accumulate in the lungs. Breathlessness at rest is a worrying symptom, especially at high altitudesfor example, if you just scaled Kilimanjaro or Everest. HAPE can be rapidly fatal if not recognized and treated in a timely fashion.

HACE or High Altitude Cerebral Edema may have set in if you notice symptoms like confusion, disorientation and stumbling. HACE is the accumulation of fluid around the brain. This condition often sets in along with HAPE but is just as dangerous even when it occurs in isolation. Death usually follows within just a few hours.

What are the Causes of Altitude Sickness?

Altitude sickness is caused by the decreased oxygen concentration at higher altitudes and the subsequent decrease in the oxygen carrying capacity in the body. All vital organs, especially the brain, require adequate oxygen levels to function properly. If the body is exposed to a decreased oxygen environment too suddenly, illness can ensue. Altitude sickness is unpredictable in that it can affect almost anyone irrespective of age, gender or physical health. For unclear reasons, some people are more susceptible to altitude sickness than others. Usually, people can ascend to heights of up to 8,000 feet with almost no ill effect. The higher and faster you ascend the greater the risk of altitude sickness. The risk is minimal to those who have already been at that altitude before, but it is a lot higher for those who have never been to such a high altitude environment before. Acclimatization is therefore of the utmost importance.

If the human body is given enough time to adjust to the atmospheric changes associated with higher altitudes, it will adapt to the reduced oxygen levels. This means that once you get to a height of 8,000 feet your body will adjust to the high altitude if you give it a couple of days. After climbing to 9 or 10,000 feet you will need to allow your body to acclimatize once again.

Based on our understanding of altitude sickness and why it occurs there are certain risk factors that one should consider:

What are the Symptoms and Signs of Altitude Sickness? 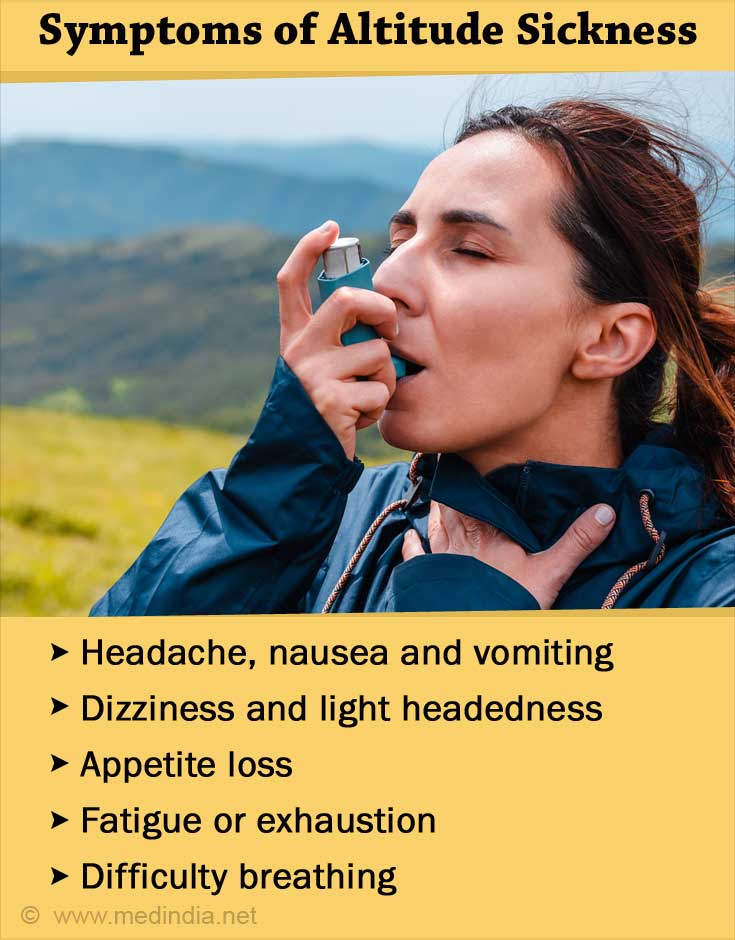 In cases of severe altitude sickness the signs will be more disturbing and are life threatening. Symptoms include:

How to Diagnose Altitude Sickness?

Early diagnosis is important to successfully treat the condition, but in most cases, sophisticated diagnostic tools will not be available. Decisions need to be made based purely on the symptoms that are present. When medical care is available, health professionals will be able to make a rapid diagnosis based on symptoms and physical examination. Listening to the lungs through a stethoscope may reveal crackles, which are basically sounds that emanate from the lungs when there is a buildup of fluid within. If you are admitted to a hospital to undergo treatment for altitude sickness you may need to undergo the following tests:

What are the Treatments for Altitude Sickness?

The first response is always critical when dealing with such situations and basic first aid is vital as medical care is often too far away because of the remoteness of the location. Mountaineers are always advised to use the buddy system (always travel with at least one other person) because of the tendency amongst most people to refuse to acknowledge their own symptoms. Fatalities often result when individuals insist on continuing an ascent as they are unwilling or unable to recognize the symptoms. If anyone in the group shows signs of altitude sickness, the following steps should be taken to control the condition immediately:

If necessary, provide the affected individual with treatment immediately: 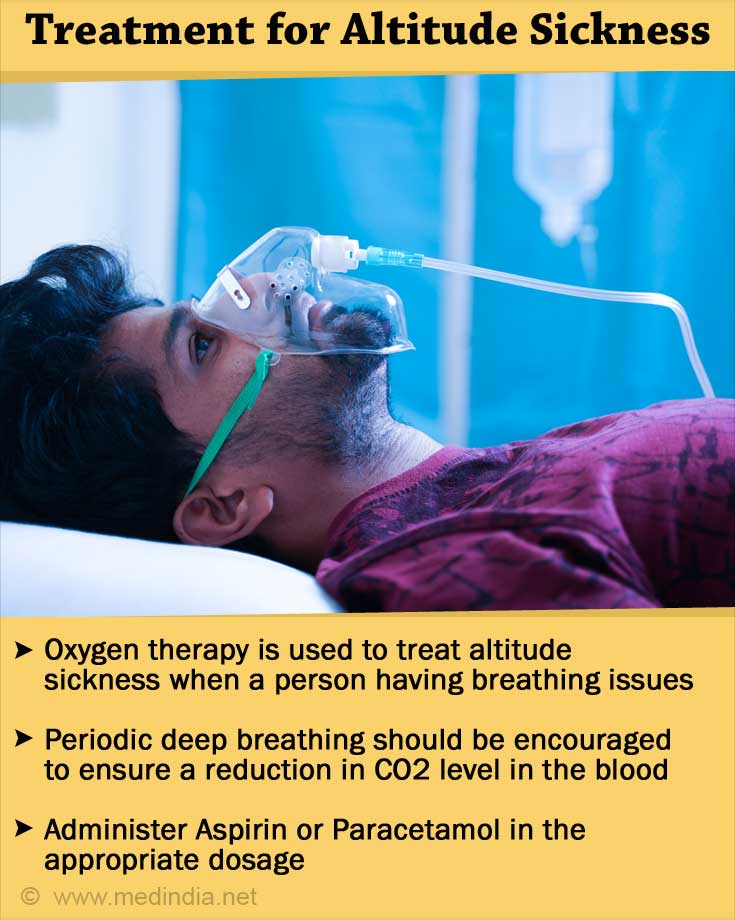 Keep in mind that administering altitude sickness medications and providing oxygen therapy to the patient does not mean that the ascent can continue as soon as the symptoms disappear. This can turn out to be fatal and it is important that you wait for a few days for acclimatization to take place. When the symptoms indicate that the person may have a severe case of altitude sickness you should initiate a descent immediately, aiming for a descent of at least 1500 to 3,000 feet.

Signs of HACE or HAPE should be treated as an emergency requiring hospitalization. Administering oxygen helps to combat breathing problems but medical care is essential to treat the problems of fluid accumulation in the lungs or brain swelling.

Can Altitude Have Impact On Dialysis Patients? A new study points out that patients living in high altitude area have 12 to 15 percent lower death rate than those living in lower altitude.

Quiz on Altitude Sickness If you are planning a trek to the high mountains, the mountaineering gear and clothing is not your only concern. Altitude sickness can be a great set back to any climbing trips. Take this quiz and find out how much you know about this common ...

Pulmonary Edema Pulmonary edema or fluid in the lungs is caused by congestive heart failure and several other conditions, including pneumonia, exposure to certain toxins etc.

Hypoxia Hypoxia is the term used to denote a deficiency in the amount of oxygen reaching the tissues.
Sign up for Wellness Consult a Doctor Sign up for Selfcare
Advertisement
Health Topics A - Z
A B C D E F G H I J K L M N O P Q R S T U V W X Y Z