Alpha-1 antitrypsin deficiency is an inherited disorder that mostly affects the lung and liver.

The condition occurs all over the world but its incidence differs according to regions and population. It is not very common among those of Asian descent while it affects 1 in 1,500 to 3,500 individuals with European lineage. 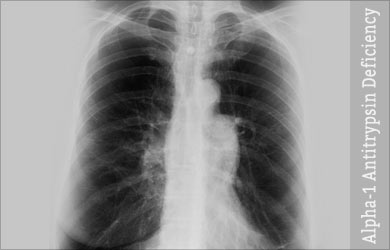 Neutrophil elastase is released from the neutrophils, a type of white blood cells, to counter infection. But the enzyme is also capable of attacking normal tissues, especially those of the lungs, and it is to stop this attack that the protein alpha-1 antitrypsin is required.

Any mutation in the SERPINA1 gene can lead to a shortage, or an abnormal form, of the protein alpha-1 antitrypsin, causing lung or liver disease.

A person inherits the condition in an autosomal co dominant pattern. Co dominance is a term used to describe the expression of two forms (alleles) of the same gene in bringing about a trait. Two copies of the allele M (MM) produces normal levels of alpha-1 antitrypsin. If an individual has variants of the gene such as S or Z alleles, the levels of the protein is compromised and there is alpha-1 antitrypsin deficiency.

A global estimate has revealed that 161 million people have a single copy of the M allele and one copy of S or Z allele (MS or MZ) in each cell. Individuals with an MS (or SS) combination are capable of producing enough alpha-1 antitrypsin to safeguard their lungs. On the other hand, people with MZ alleles are at an increased risk of lung or liver damage.

The signs and symptoms of alpha-1 antitrypsin deficiency, and the age at which they appear, vary among individuals. The symptoms of lung disease usually appear for the first time between the ages of 20-50 years, but this differs between individuals.

The first symptoms of the condition include breathlessness during the slightest exertion, wheezing, inability to exercise, unexpected weight loss, fatigue, respiratory infections, and palpitations. Affected individuals are likely to develop emphysema, a disease that affects the air sacs in the lungs.

About 10 percent of infants with alpha-1 antitrypsin deficiency develop jaundice, while 15 percent of affected adults develop liver damage (cirrhosis) the symptoms of which include swollen abdomen, feet or legs and jaundice.

Some individuals are also predisposed to develop a type of liver cancer called hepatocellular carcinoma. Some develop Panniculitis, a skin condition characterized by hardened skin, with painful lumps or patches. The severity of this skin condition varies according to individuals and their age.

Many cases are likely to remain undiagnosed, particularly those with chronic obstructive pulmonary disease (COPD). Sometimes the condition can be misdiagnosed as asthma.

Those who are at high risk for Alpha-1 antitrypsin deficiency must be tested for the disease. They include those with-

Early diagnosis can help the affected persons by aiding them to consider different choices in lifestyle, professions or personal decisions and this could vastly improve the quality of their lives. However, most patients with the condition remain undiagnosed or are believed to have unexplained COPD.

In several developed countries such as the United States, Canada, and many European countries, A1AD patients whose lungs are affected are likely to be subjected to augmentation therapy wherein they receive alpha-1 antitrypsin through intravenous infusions. The source of this protein is donated human plasma.

This treatment enables disease control and stops further lung damage. However it has now been recommended that this method of treatment be carried out after the emergence of emphysema symptoms.

Augmentation therapy is not suitable for those with liver disease; it is better to focus on treating the symptoms in these persons.

Research is being carried out on other treatment modalities such as recombinant and inhaled forms of A1AT.

Bile Duct Cancer Bile duct cancer occurs either within the liver or the point where the bile ducts emerge from the liver or outside the liver.

Study Highlights A Finding That Could Help Alpha-1 Sufferers Breathe More Easily A new mutation in the gene that causes the inherited disease known as Alpha-1 Antitrypsin Deficiency (Alpha-1) has been identified by scientists.