Seasonal or Perennial Allergy may require antihistamine eye drops to block the effect of histamine released during allergy. Mast cell stabilizers prevent the release of histamine from mast cells. Some drugs act in multiple ways to reduce allergy.

Histamine is one of the substances released during an allergic reaction. Antihistamines block the effects of histamine and prevent allergy symptoms. This class of drugs includes older drugs such as chlorpheniramine and antazoline as well as newer ones such as levocarbastine and emedastine. Chlorpheniramine and antazoline are available in combination with vasoconstrictors. The newer drugs are more effective than the older ones. Antihistamines may cause side effects like headache, eye discomfort, stinging of the eyes and cold symptoms. 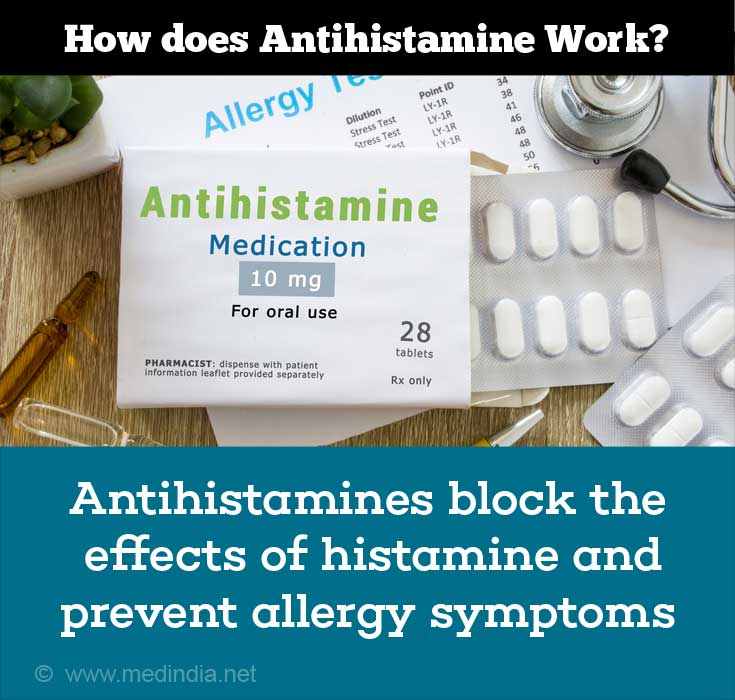 Oral antihistamines are useful when nasal or other allergy symptoms are also present. Newer drugs such as levocetirizine, desloratadine, rupatadine, fexofenadine and mizolastine are more effective than the older oral antihistamines. However, they produce dryness of eye as a side effect.

Histamine and other substances that cause inflammation are released from certain cells called mast cells. A class of drugs called mast cell stabilizers blocks the release of histamine from these cells. They are most effective in preventing an allergic reaction, hence they should preferably be used when the patient anticipates an allergy. These include cromoglycate, lodoxamine and nedocromil. Lodoxamine(Alomide) is more effective than cromolyn sodium and is useful in severe cases. Nedocromil may be administered twice a day in seasonal allergies, whereas the others are usually administered 4 times a day. They may cause side effects such as headache, burning/stinging or eyes or unpleasant taste.

Some newer antihistamines have additional mast cell stabilizing action. These include azelastine (Optivar, Oculast), epinastine (Elestat), ketotifen (Zaditor eye drops, Alaway eye drops) and olopatadine (Patanol eye drops). Since these drugs act through multiple mechanisms, they may be more effective than plain antihistamines or mast cell stabilizers. They are administered twice a day. They cause side effects like burning/stinging in the eyes, headache or bitter taste. They may also cause symptoms of upper respiratory tract infection. Ketotifen is available as a preservative free preparation. Olopatadine is also available in higher concentration (Pataday eye drops) that is used once a day.(4✔ ✔Trusted Source
Eye Allergy

hi i was looking for an effective eye drop for allergy with symptoms including redness, watering and burning sensation in the eye , and got to know abt this great product from baush and lomb alaway ketotifen eye drops which seems to be very effective ,but unable to find it in the indian market ,appreciate if you guys could help.

Quiz on Eye The eyes are the most complex part of the body after the brain. To learn more about the eye, its functions and the diseases that affect the eye participate in this ...

Yoga and Eye Sight Human eyes need care and attention. Eyesight is improved when the muscles of the eyes are relaxed. Yoga can help balance the correlation between eyes and mind.

Conjunctivitis Conjunctivitis or Pink Eye causes redness and soreness of the conjunctiva and is responsible for 1% of all emergency visits to a hospital.

Quiz on Eye The eyes are the most complex part of the body after the brain. To learn more about the eye, its functions and the diseases that affect the eye participate in this ...