What is Adenoids / Adenoiditis?

Adenoids / Adenoiditis are lymph tissue which lies in the upper respiratory tract between the nose and the back of the throat. They are part of the glandular tissue encircling the back of the throat. Unlike tonsils, they are not visible through the mouth and special instruments are needed to see them. Adenoiditis is the inflammation of the adenoid tissue that is caused by bacterial or viral infection.(1✔ ✔Trusted Source
What Is Adenoiditis?

Adenoids, along with the tonsils are first line of defense in the throat of children. Both adenoids and tonsils are located near the entrance of the respiratory tract, which allow them to catch incoming infections. It is stipulated that they play a major role in helping to form antibodies to the germs which help the child to resist and fight future infection.

Adenoids are usually found only in children. They grow from birth and are the biggest by the time the child is 3 to 5 years old. In the teenage years, adenoids progressively shrink and disappear completely by adulthood. Many children have their tonsils and adenoids removed when they are young, however they do not suffer any loss in their future immunity to respiratory tract infections.

In adenoiditis, the adenoid tissue gets infected which can typically last for weeks or even months. The infection is caused usually by viruses, such as the Epstein-Barr virus or bacteria such as Streptococcus. Adenoiditis could lead to repeated nasal infections with continuous thick green or yellow drainage. Middle ear infection namely otitis media is commonly seen in children with adenoiditis because the adenoid tissue is situated close to the eustachian tubes in the back of the nose. Your child is more susceptible to infections of the adenoidal tissues if you have recurring infections in the throat or neck or suffer from infections of the tonsils frequently.(2✔ ✔Trusted Source
Enlarged Adenoids

The swelling or enlargement of the adenoid tissue generally restricts passage of air through the upper respiratory tract, leading to difficulty in breathing through the nose. This problem leads to: 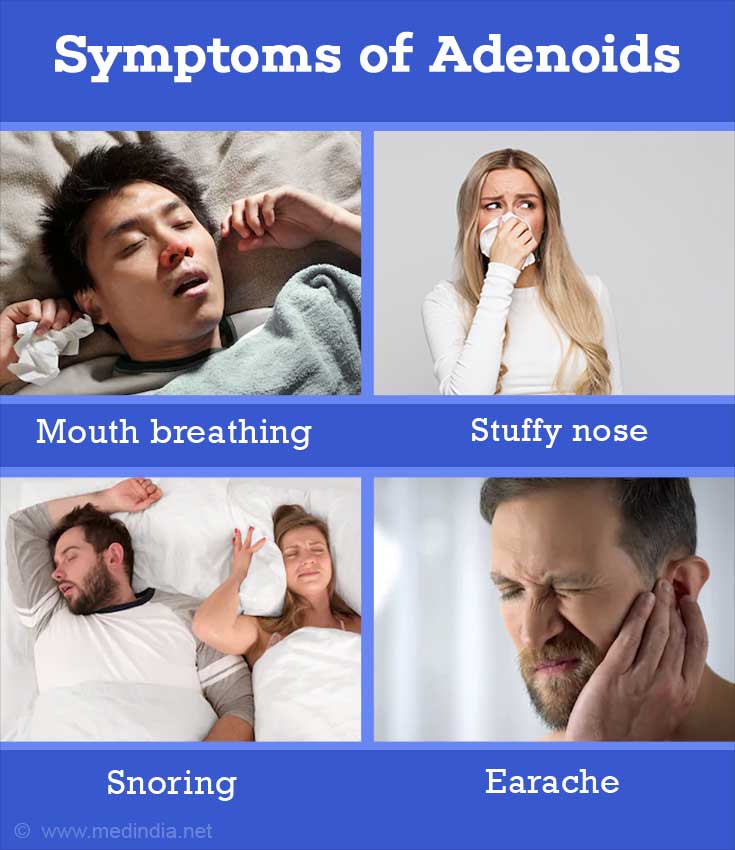 Glue ear: In adenoiditis, blockage of the Eustachian tubes causes build-up of mucus in the middle ear, which interferes with the movements of the tiny bones and consequently affects hearing.

Sinus infection: The sinuses are hollow regions located within the facial bones which contain pockets of air and communicate with the nasal passage. Enlarged adenoids may both the opening of the sinuses into the nose, thereby resulting in accumulation of secretion in the sinuses, which can get infected.

Vomiting: This happens when the child inadvertently swallows a great deal of pus, mainly while sleeping at night.

Chest infections: If the adenoids become severely infected with a virus or bacteria, your child may experience chest infections like pneumonia or bronchitis due to spread of the infection to the lungs, bronchi and so on.(5✔ ✔Trusted Source
All You Need To Know About Adenoids 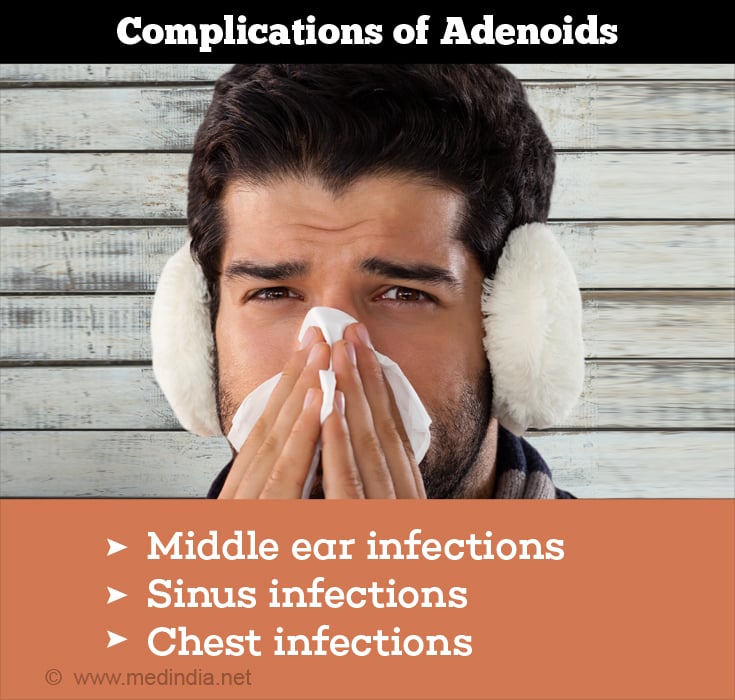 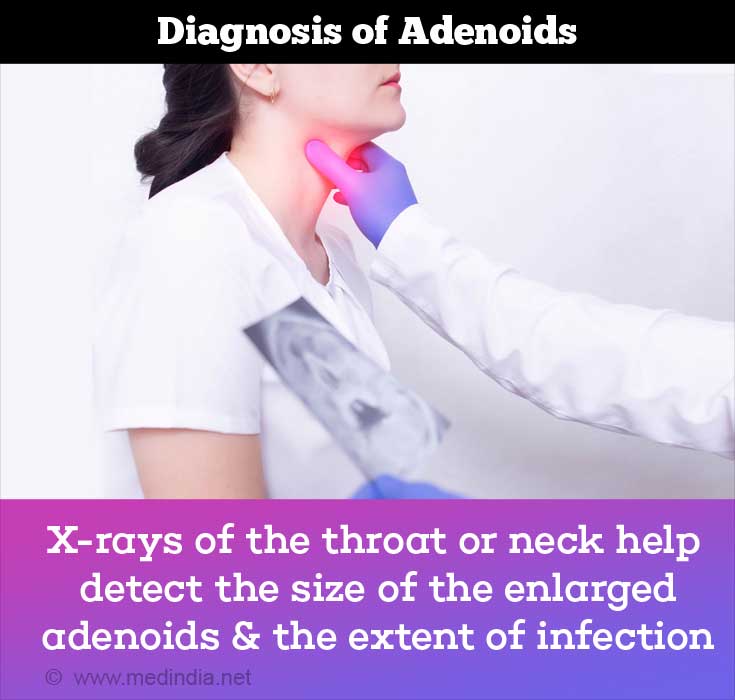 In most cases, the child recovers with symptomatic treatment. If required, the pediatrician will decide the best treatment for your child, which depends on the nature, type and severity of the infection, as well as the number of times the child has developed infections. If the child has middle ear infection or sinusitis, treatment is initiated to reduce pain in the ears. Antibiotics would be started for your child if deemed necessary by the doctor.

Sometimes, the pediatrician refers the child to an ear, nose, and throat (ENT) surgeon to have the adenoids removed by a procedure known as adenoidectomy. Along with the adenoids, sometimes the tonsils are also removed at the same time. 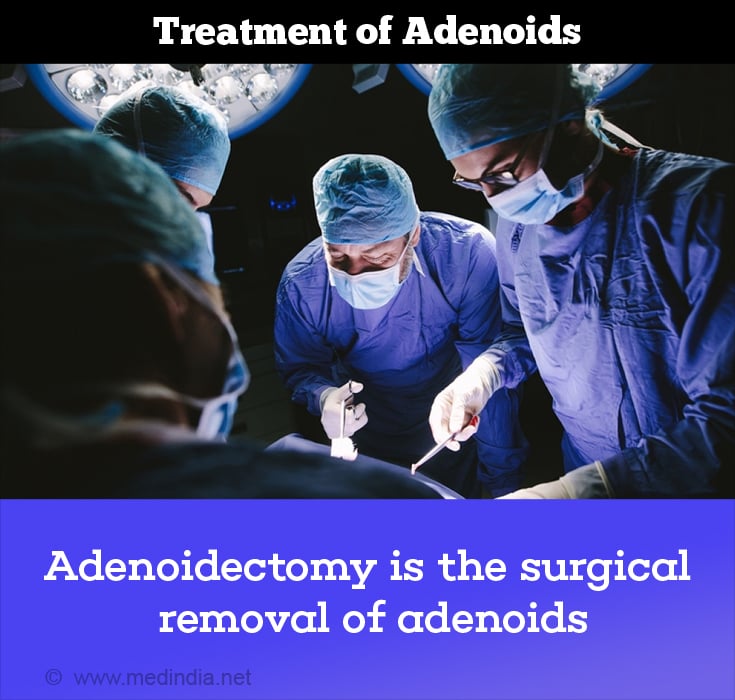 Complication and Risks: As with any surgery, there are risks involved with adenoidectomy too. They include bleeding from the site of adenoid removal, infection, as well as anesthetic reactions. The child may also sound nasal while talking because after the adenoids are removed, the gap between the back end of the nasal cavity and the top of the mouth may not close properly. However, this may be a temporary occurrence and some kids may require speech therapy to correct this.

Latest Publications and Research on Adenoiditis

Adenoid Removal in Kids Does Not Prevent Upper Respiratory Infections In children, adenoid removal does not lessen upper respiratory tract infections such as sinusitis and colds, reveals research.

Tonsils and Adenoids Cause Sleep Problems in Kids Adenotonsillectomy is the surgical treatment of swollen tonsils and adenoids and is the chief cure for sleep apnea.
Sign up for Wellness Consult a Doctor Sign up for Selfcare
Advertisement
Health Topics A - Z
A B C D E F G H I J K L M N O P Q R S T U V W X Y Z