Pituitary gland is an endocrinal master gland of the body that releases Growth hormone that is responsible for the overall growth of a child.

The pituitary gland is a small gland at the base of the brain that produces several important hormones to control body functions such as growth, development, reproduction, and metabolism. Growth Hormone (GH) is part of a cascade of hormones that is produced by the pituitary gland. It regulates the physical growth of the body. This cascade begins in the region of the brain called the hypothalamus, which regulates the pituitary. 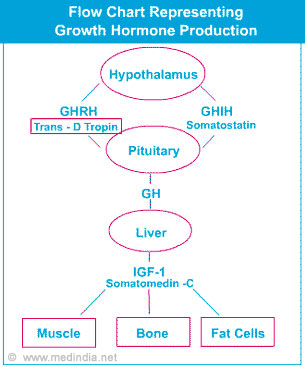 Growth hormone-releasing hormone (GHRH) is a hormone produced by the hypothalamus and its function is to stimulate the pituitary gland to produce GH. Somatostatin secreted by the cells of hypothalamus and also by the cells of stomach, intestine, and pancreas helps inhibit GH production. When pituitary secretes GH into the bloodstream it results in the production of another hormone called Insulin-Like Growth Factor 1 (IGF-1) in the liver. IGF-1 is the factor that actually causes the growth of bones and other tissues of the body. It also plays an important role in signaling the pituitary to reduce GH production.

Readers may also be interested to read my summary about the latest guidelines for acromegaly. http://doiop.com/AcromegalyGuidelines

I was diagnosed with a pituitary tumor in 2005. It was a late stage macroadenoma. I have had surgery, gamma knife radiation and I have had 2 years of sandostatin. I still never feel good. I have lots of fatigue, muscle weakness and I take a lot of medicine. Can anyone give me any good news on this. My email address is triplejent@hotmail.com. I would love to hear from some other acromegaly patients to hear their stories. Mine has been a nightmare. I was sick and not feeling well for quite sometime, fatigue like no other actually exhaustion to where I was nauseated and sometimes vomiting when I got home from work. Finally told my husband that I either had something wrong with my heart or I had cancer. I was having a lot of palpitations and chest pain so I was sent to a cardiologist my first go around and they didn't pick up on it was going to ablate the areas on my heart that were beating irraticaly. I just need to hear someone elses story. Please email me. Thank you. Kayla

hi Kayla, i too had a macroadenoma which was removed in 06 but did not need drugs however i too have profound fatigue and do not feel good at all. I now have bad joints everywhere and have had 3 total knee replacements and have also got Parkinson's disease. My quality of life is doing down the slippery slope. I am under so many specialists but none seem really interested. It is a lonely battle to get well and sometimes i wonder if i ever will but will not give up! good luck. Where do you live? snurff

You can read longer article here http://www.genericlook.com/diseases/Acromegaly/. Hope it will help you...

Achondroplasia Achondroplasia is a rare genetic disorder of bone growth that causes short-limbed dwarfism. It occurs due to mutations in a single gene called the FGFR3.

Quiz on How to Look Taller Cursed the Height Chart ever since you were born? Do the diktats of 'Fashion for the Petite' confound you? Wondered what 'proportion' and 'line', 'color' and 'texture' of clothes mean? Take our quiz where we give you fast and easy tips on creating ...