Acoustic neuroma is a benign intercranial tumor involving the myelin-forming Schwann cells of the vestibular portion of the 8th cranial nerve in the peripheral nervous system. It is a slow-growing tumor, which usually does not spread beyond its site of origin within the brain.

Before we go any further on acoustic neuroma it is essential to give a run up to the parts involved in the tumor formation.

The auditory nerve is a group of nerve fibers that transmit hearing information between the cochlea (situated in the inner ear) and the brain. The vestibular nerve, on the other hand, is responsible for carrying balance-related information from the semicircular canals of the ear to the brain. During their passage through the bony canals of the skull, the auditory and the vestibular nerves become conjoined and come to be known as the Vestibulocochlear nerve or the 8th cranial nerve. 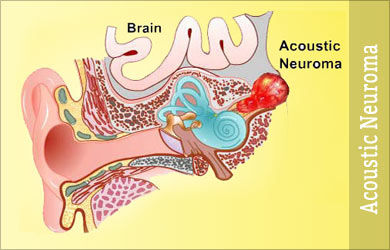 Hearing loss is often cochlea-related and it is only a very small percentage of hearing problems that is auditory nerve  related. Acoustic neuroma is one of them.

The term acoustic neuroma is a misnomer as the tumor does not arise from the cochlear part of the vestibulocochlear nerve. Instead it arises from the vestibular division of the nerve and hence the correct terminology of the tumor is vestibular schwannoma, a term which also indicates its Schwann cells origin .

As the tumor develops, it begins to occupy the angle between the cerebellum and the pons and may compress the 5th, 7th, (sometimes even the 9th and 10th) cranial nerves. In due course, it may begin to compress the pons and lateral medulla which in turn may obstruct the cerebrospinal fluid and increase the intracranial pressure.

The second most common form of schwannomas involving cranial nerves is the Trigeminal neuromas.

very good info. I suffer sudden hearing loss left ear in 1992 and now rt ear in 2007. ENT docs never advise except using hearing aid. I am engineer and was always thining something like this. I used to enjoy classicle music. But now i listen tunes which I know hear distorted. wher can I check up and possibly get help? I am 69 years of age. so....

Bell's Palsy Bell''s palsy is facial nerve disorder that causes weakness of the muscles on one side of the face. Its cause is unknown but most people make a full recovery within 8 to 12 weeks.

Tinnitus Tinnitus is the perception of ringing, hissing, or other sound within the ears when no corresponding external sound is present.

Brain Tumor Brain tumors are the abnormal growth of brain cells that may be benign or metastatic. Brain tumors account for about 2.4% of all the tumor diagnosesandare most challenging due to their critically delicate location.

Hearing Aids Hearing aid is an electronic device that helps people with hearing loss to hear more and communicate more effectively. Only 1 out of 5 people benefit from a hearing aid.