Excessive secretion of this acid and pepsin or a weakened stomach mucosal defense is responsible for damage to the delicate mucosa and the lining of the stomach, esophagus and duodenum resulting in ulceration which is known as Acid Peptic Disease.(1✔ ✔Trusted Source
Kunmam (Acid Peptic Disease)

Physiologically, a certain amount of acid is secreted by the gastric cells lining the stomach as a natural mechanism which serves to activate the digestive enzymes and help in the digestion and assimilation of important proteins so that they can be easily absorbed by the body.(2✔ ✔Trusted Source
American College of Gastroenterology guideline on the management of Helicobacter pylori infection. 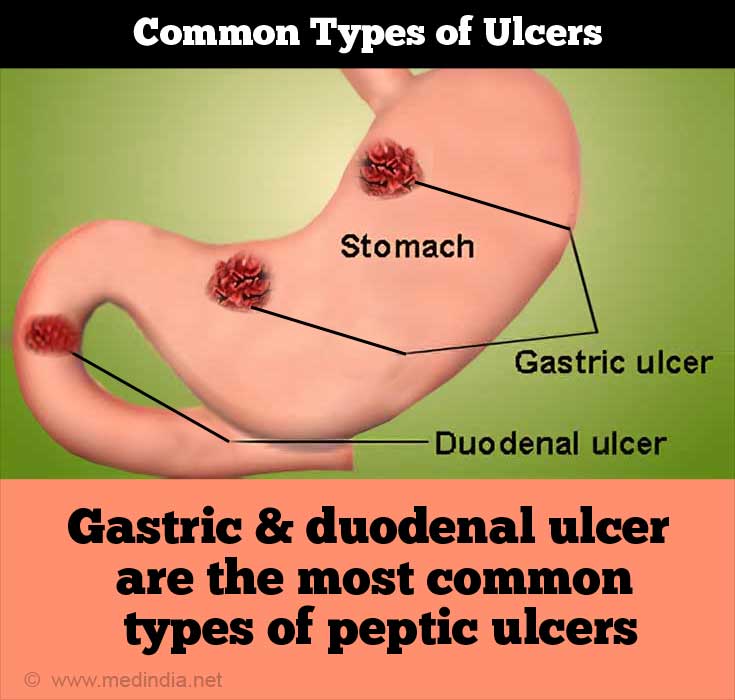 The commonest ulcers are the gastric and the duodenal ulcer.

Peptic ulcer is diagnosed using blood and stool tests, breath tests, and endoscopy and barium radiography. The patient is treated with drugs that reduce acidity and sometimes in addition with certain antibiotics to eliminate the H pylori causing the infection (described below). Surgery may be required in some cases.

Acid peptic disease is a result of either a decreased gastric mucosal defense or an excessive acid production.

Causes of acid peptic disease include: 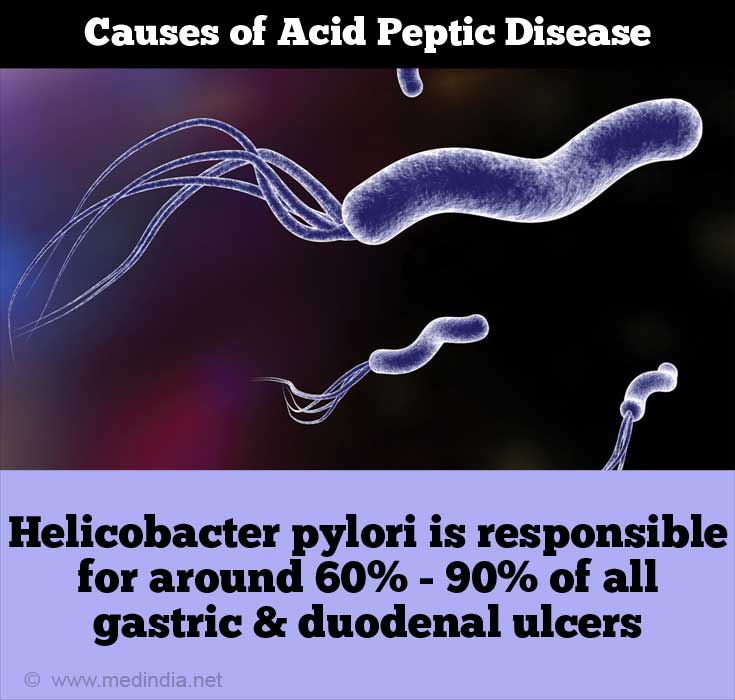 Peptic ulcer disease is usually a chronic problem with a natural history of relapse and remission which can last for over 10 years or even more. Gastric and duodenal ulcers usually have common symptoms such as: 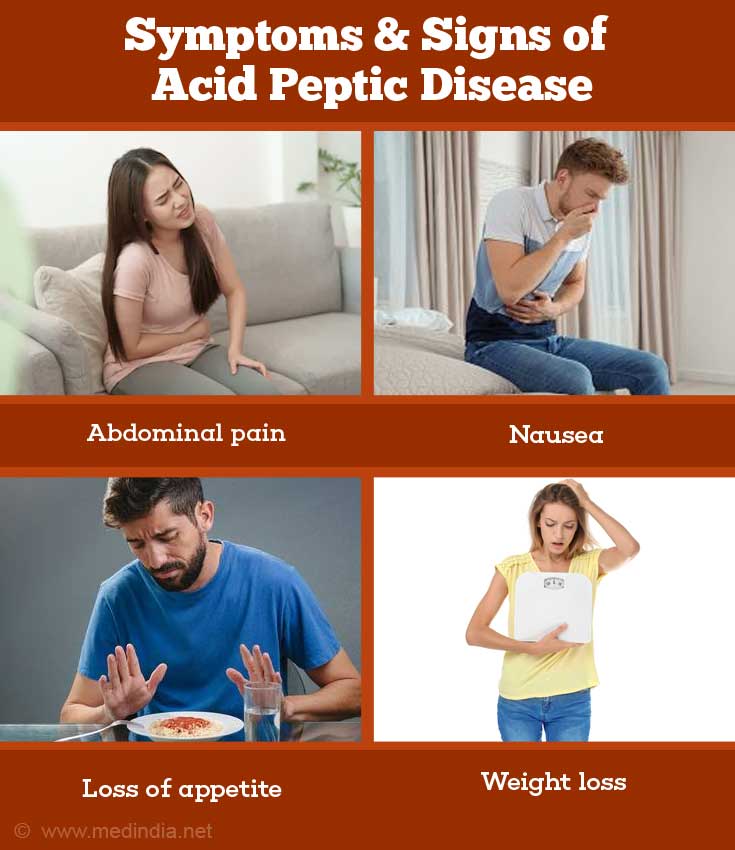 What is the difference between gastric ulcer and duodenal ulcer? 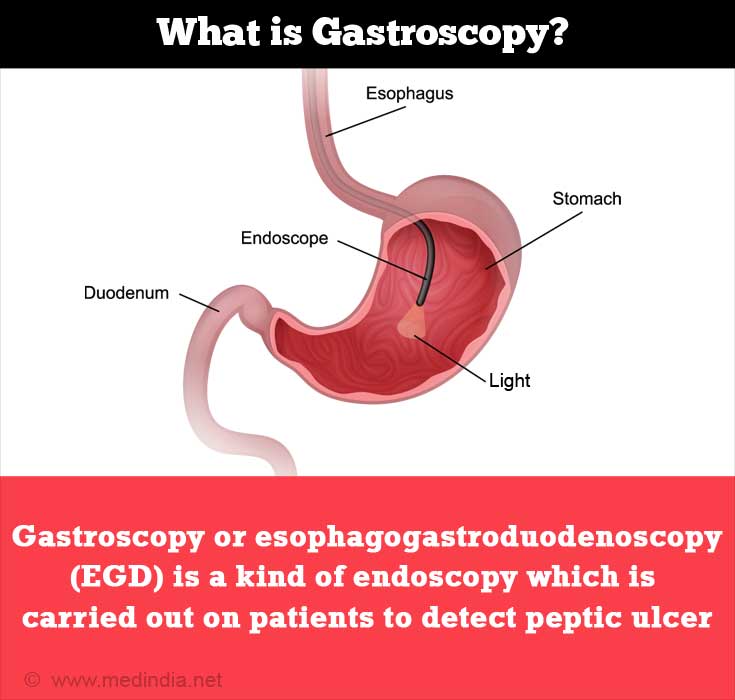 Acid Peptic Disease is treated with drugs that reduce acidity and sometimes in addition, with certain antibiotics to eliminate the H pylori causing the infection. Surgery may be needed in cases of complication.(8✔ ✔Trusted Source
Peptic Ulcer: Causes and Therapy

A) Diet: Dietary therapy relates to avoidance of spicy and oily foods which increase acid production and are difficult to digest. Avoid tea and coffee, alcohol, aspirin and other NSAIDs, chocolate, tobacco and cigarettes. Meals should preferably be light and at small intervals.

B) Eradication of H.pylori: The three way approach to eradicate H.pylori involves diagnosis, treatment and confirmation of the cure of H.pylori infection. The standard protocol to eradicate H.pylori involves the use of two or three antibiotics (e.g., amoxicillin, tetracycline, clarithromycin, metronidazole) and the use of a proton pump inhibitor (e.g., esomeprazole, omeprazole, lansoprazole, rabeprazole, pantoprazole) with or without a bismuth compound for around 2-3 weeks and repeated if there is recurrence.

C) Avoid NSAIDs or the concurrent use of a prostaglandin analogue (misoprostol) may be prescribed to prevent peptic ulceration due to NSAIDs.

D) The use of antacids or H2 receptor antagonist (H2RAs) such as cimetidine, ranitidine, famotidine, and nizatidine which help in the reduction of gastric acid secretion and in turn increase the gastric pH and reduce the secretion of pepsin. 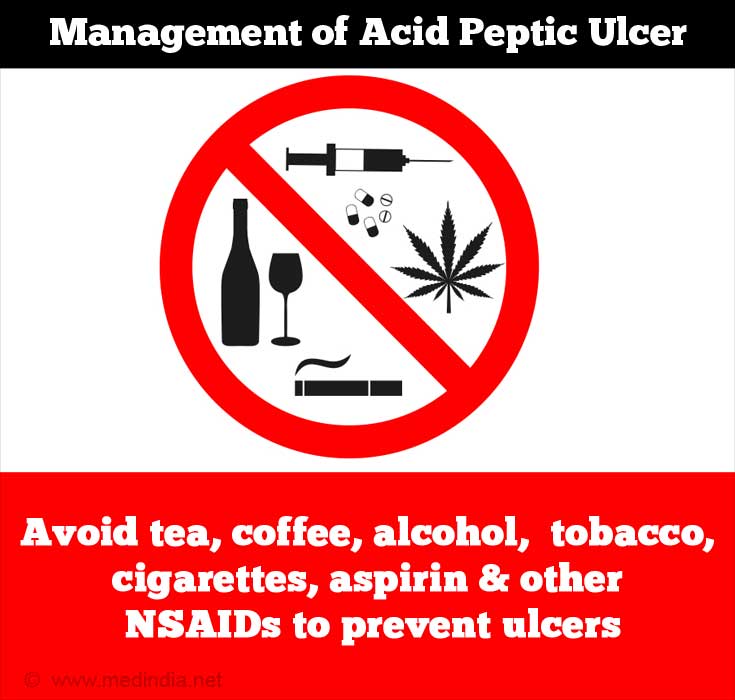 Surgical treatment of ulcer may be indicated for patients with failure to respond to medical line of treatment or with complications such as increased pain, bleeding, obstruction and perforation.

Acid Peptic Disease
Peptic ulcers occur in presence of acid and pepsin. The two main types are gastric and duodenal but they can also occur at GJ Stoma, lower end of esophagus and Meckels diverticulum.

Barrett's Esophagus
Barrett's esophagus is a condition where the inner lining of the esophagus changes to resemble the intestinal lining. It predisposes the patient to cancer.