Prune belly syndrome is characterized by an absence of abdominal muscles, severe abnormalities of the urinary tract and undescended testes.

Prune belly syndrome is a rare condition that affects approximately one child among 30,000 to 40,000 live births. It usually affects only male children. 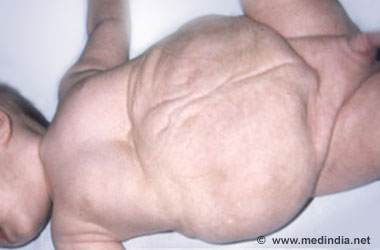 It is present from birth and is characterized by the following three features:

The condition is called prune belly syndrome due to the wrinkled appearance of the abdomen, which results in resemblance of the child to a dried plum. It is also referred to as the triad syndrome, Eagle-Barrett syndrome, or the abdominal muscle deficiency syndrome.

Prune belly syndrome occurs due to a developmental abnormality when the fetus is within the uterus. A number of theories have been proposed to explain why it occurs, though the exact reason is not yet clear. While in the uterus, the fetus may suffer from pulmonary hypoplasia, a condition where the development of lungs is affected, and oligohydramnios, where the amount of fluid surrounding the fetus may be reduced. Many babies affected with this condition are stillborn.

Some variations in the condition have been noted. For example, in pseudo prune belly syndrome, urinary tract abnormalities are observed but the abdominal muscles are intact and the testes may be normally positioned in the scrotum. Patients with prune belly-like variant show abdominal wall defects; however, they do not show urinary tract problems.

Other problems related to the heart, digestive tract, bones and muscles may also be observed in some affected children.

Children with prune belly syndrome are frequently prone to urinary tract infections. Antibiotics are used to prevent as well as treat these infections. Surgical correction is required in cases of urinary tract obstruction, for reconstruction of the abdominal wall, and treatment of undescended testes. Children with kidney failure may benefit from kidney transplantation.

Prognosis or outcome of the disease is poor in children with reduced lung or kidney function. Death could occur from lung complications or kidney failure.

Stones in Urinary Tract
Ask people who have suffered from urinary stones and they will tell you how excruciating the pain can be!

Urinary Tract Infection
Urinary tract infection (UTI) is a bacterial infection which can happen anywhere along the urinary tract.

Quiz on Urinary Tract Infections (UTIs)
A urinary tract infection is infection of the kidneys, ureters, bladder, and urethra. Take the following quiz to test your knowledge about this commonly occurring ...

Anatomy of Urinary System - Animation
Animation & slides showing anatomy of urinary system and the role of kidneys in getting rid of the waste products and excess fluid from our body to keep us healthy.
Sign up for Wellness Consult a Doctor Sign up for Selfcare
Advertisement
Health Topics A - Z
A B C D E F G H I J K L M N O P Q R S T U V W X Y Z