What is Endometrial Cancer?

Cancer of the inner lining of the uterus (womb) is called endometrial cancer and it most commonly affects post-menopausal women. Never ignore vaginal bleeding in this age group.

Cancer of the endometrium involves the inner lining of the womb (uterus) called endometrium.

Another condition with a similar name, called endometriosis, is a benign condition which occurs due to implantation of the endometrial tissue (stroma and glands) onto another location, like the outside of the uterus or lining of the pelvis, during menstruation.

The condition is most common after the age of 60 years. This cancer accounts for about 6 percent of all cancers in women.

Research shows that some women are more at risk of developing the cancer than others. The condition presents as vaginal bleeding. Any post-menopausal woman, who experiences vaginal bleed should not ignore it. She should immediately seek an appointment with her gynecologist. Sometimes, it is first noticed as vaginal spotting after sexual intercourse.

Surgery is the main cornerstone for the treatment of the endometrial cancer. The prognosis of the disease if diagnosed early is extremely good with a five-year survival of over 80%.

The other cancer of the uterus is called sarcoma. These occur rarely and there are several types from low- grade or slow- growing to high grade sarcomas that grow more rapidly. Sarcoma usually occur from the muscular wall of the uterus. A benign type is called leiomyoma and the malignant version - leiomyosarcoma.

The benign leiomyoma is also called a fibroid tumor. The fibroids are common and usually require no treatment. 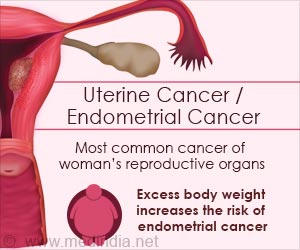