Unlike a conventional fingerprint that occurs only on the fingertips and can be altered by surgery, a DNA fingerprint is the same for every tissue, and organ of a person. It cannot be altered by any known treatment.

Fingerprinting with ink and paper, based on fingertip ridge patterns is the standard method for personal identification. Fingerprints are constant throughout life, fingerprints can be used to distinguish one person from any other. Similarly the DNA of every individual is also unique in its own way. Actually the method should be called simply DNA printing or DNA typing since it has nothing to do with the fingers. The degree of variation in bands from one person to another is so large that the theoretical probability that the bands seen in one individual are present in another unrelated individual may be in millions. The advantages over fingerprints are numerous. DNA can be isolated from any part of the body, skin cells, blood or blood stains or semen. 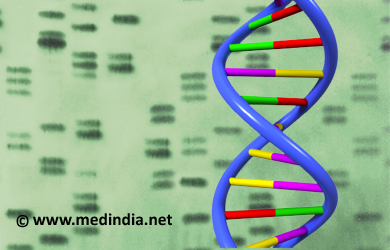 However some of the disadvantages of DNA fingerprinting are:

Many other similar disorders can be diagnosed

A Boon to Solving Criminal Cases >>

Quiz on DNA Fingerprinting
DNA fingerprinting, a technique that was brought forth by Sir Alec Jeffreys, has been a boon to forensic studies Test your knowledge on DNA fingerprinting by taking this ...
Sign up for Wellness Consult a Doctor Sign up for Selfcare
Advertisement
Health Topics A - Z
A B C D E F G H I J K L M N O P Q R S T U V W X Y Z

Loram (2 mg) (Lorazepam) Drug Interaction Checker Find a Hospital Noscaphene (Noscapine) How to Reduce School Bag Weight - Simple Tips Drug Side Effects Calculator Daily Calorie Requirements Sanatogen A-Z Drug Brands in India Blood Donation - Recipients
This site uses cookies to deliver our services.By using our site, you acknowledge that you have read and understand our Cookie Policy, Privacy Policy, and our Terms of Use  Ok, Got it. Close