What is Hirschsprung Disease?

Hirschsprung disease, also known as congenital megacolon, aganglionic megacolon or primary megacolon, is a functional bowel obstruction that usually manifests in newborn babies. It occurs due to the absence of nerves that promote bowel movements in the rectum, anus, and sometimes the colon.

What are the Causes of Hirschsprung Disease?

Hirschsprung disease occurs because of lack of parasympathetic nerve cells in the wall of the rectum and anus, and sometimes the colon. As a result, the lower large intestine cannot relax and remains contracted, and does not allow the passage of feces. As a result, dilatation of the intestine occurs above the level of obstruction.

The exact reason why this abnormality occurs during development of the baby is not known. Mutations in several genes like the RET and the EDNRB genes have been implicated.

What are the Types of Hirschsprung Disease?

Depending on the extent of the digestive tract involved, Hirschsprung disease can be classified as:

What are the Symptoms and Signs of Hirschsprung Disease?

Symptoms and signs of Hirschsprung disease usually appear within the first 24 to 48 hours following birth and include the following:

Hirschsprung disease is sometimes detected later, in older children or even adults:

How do you Diagnose Hirschsprung Disease?

Hirschsprung disease is diagnosed based on the symptoms and signs of the baby noted on physical examination, and certain tests.

When the doctor inserts a finger into the anus of the baby during physical examination, the rectum feels empty with no feces, and the sphincter feels tight. Sometimes, explosive diarrhea may occur following the procedure.

Tests used to diagnose Hirschsprung disease include the following:

How do you Treat Hirschsprung Disease?

Babies with Hirschsprung disease require immediate resuscitation and rectal washouts to relieve the intestinal obstruction. Some babies may require an emergency surgery called colostomy. In this procedure, the intestine is diverted to the skin, and the feces is collected in a colostomy bag, which is emptied at regular intervals.

A more definitive surgery called a pull-through procedure is carried out once the baby is 3 to 6 months of age or 8 to 10 kg in weight. The part of the intestine that does not have nerve supply is surgically removed and the cut end is attached to the anus.

What is the Prognosis or Outcome of Babies with Hirschsprung Disease?

The prognosis of babies with Hirschsprung disease depends on the extent of the condition, and the presence of complications or other abnormalities. Most babies do well following surgery, and lead normal lives. Some may continue to suffer from incontinence for several years, while a small percentage may even need a permanent colostomy.

Genetic counseling may be useful in preventing a future baby from suffering from the condition. However, a complete list of genes that are responsible for the condition is not available as yet. 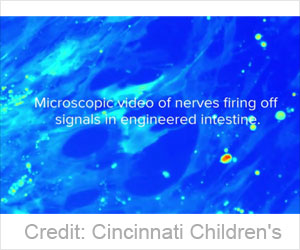