Why is Popcorn the Right Snack Choice?

Popcorn is a whole grain food made with maize. It resembles corn on the cob. Some strains of corn are cultivated especially as popping corn. Popcorn is made up of three main components mainly endosperm, germ and the pericarp. The endosperm is either white or yellow in colour and is made of soft and hard starch granules. The living part of the kernel is known as germ or embryo. Outer hull is the pericarp made of cellulose. The popping corn expands from the kernel and puffs up when heated.

Popcorn can be claimed as the king of snack foods. It is hard to believe that a food so tasty can actually be so full of nourishment.

The importance of consuming recommended proportion of foods from each food group (grains, vegetable, fruit, dairy, protein, and oil) and making smart food choices within the individual food groups, can never be understated.

Grain foods are of two types. Foods made of whole grains and foods made of refined grains. Whole grain foods like whole wheat, millet, oats, broken wheat, brown rice contain the entire grain kernel -- the bran, germ, and endosperm. Refined grain foods are devoid of bran and germ and hence are stripped off the most essential nutrients like dietary fiber, iron, and B vitamins.

Todays new health guidelines recommend at least half the daily need of grains to be filled by whole grains. That is, trying to eat at least three servings of whole-grain products each day.

Choosing whole grain foods have been known to reduce the risk of heart disease, high cholesterol, diabetes and obesity since ages. Whole grains are also low glycemic carbohydrates which inhibit insulin production and enhance blood sugar control. Whole grains are bountiful in fiber, which is great for digestion and weight loss too.

It is best recommended by all nutrition experts to get hold of a whole grain fiber rich snack when hungry. And here is where the fluffy popcorn fits the recommendations to perfection.

Popcorn is a whole grain fiber rich carbohydrate that is not only low in calories, but a good source of B vitamins as well. A cup of air-popped popcorn is only 30 calories whereas oil-popped is only 55 calories. With added butter it is only 90 to 120 calories per cup. Three cups of popped popcorn, 1 slice of large bread, 1 cup of ready-to-eat cereal, 1/2 cup of cooked rice/pasta, 1 chappati can be considered equivalent. (A single serve of whole grain)

Joe Vinson, Ph.D., a pioneer in analyzing healthful components in chocolate, nuts and other common foods in his study claims popcorn to be a more concentrated source of polyphenols (antioxidants) than many fruits and vegetables. The hull of the popcorn is seen to have the highest concentration of polyphenols and fiber.

*Percentages are relative to US recommendations for adults.

How Popcorn Pops Up

Each kernel of popcorn contains some moisture and oil. Unlike most other cereal grains, the outer hull of the popcorn kernel is strong and impervious to moisture and the starch inside is hard and dense.

As the oil and the water are heated, the moisture in the kernel (with a moisture proof hull) turns into a superheated pressurized steam. The starch inside the kernel gelatinizes, softens and becomes pliable and the moisture vaporizes until the pressure in the kernel reaches 135 pounds per square inch and the temperature reaches 400-460 degrees. Because of the hard pericarp the pressure continues to increase until the breaking point of the hull is reached.

The hull ruptures rapidly and the gelatinized starch granules puff out into an airy foam. As the foam cools, the starch and protein polymers set into a crispy puff. Special varieties of corn are grown to give improved popping yield. The cultivated strain is Zea mays everta, which is a special kind of flint corn.

Latest Publications and Research on Why is Popcorn the Right Snack Choice?

Analysis Reveals Cinema Popcorn's Nutritional Horror
Forget Freddy Krueger or flesh-eating zombies: the real villain of a night at the movies could be lurking in a bag of popcorn or drinks carton, according to a new US study.
READ MORE

Antioxidant Levels Higher in Popcorn Than Fruits and Vegetables
Scientists have revealed that popcorn contains more of the healthful antioxidant substances called "polyphenols" than fruits and vegetables.
READ MORE 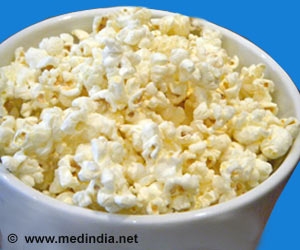 Is Fat-free Popcorn an Ideal Snack?
A study indicates that fat-free popcorn may satisfy your hunger better than potato chips of similar label size.
READ MORE

Why is Popcorn the Right Snack Choice? - Related News