Written by Maulishree Jhawer, BHSc, MSc
Article Reviewed by Dietitian  on May 06, 2019

Turmeric (Curcuma longa), a versatile natural plant is truly one of the marvelous medicinal spices of the world. It is an indispensable ingredient of the curry powder that gives a musky flavor and yellow color to the curries. It has been used by Ayurvedic and Unani practitioners in India from ages. It is used in Indian traditional medicine as a drug to strengthen the stomach and promote its action and also as a tonic and a blood purifier.

The active ingredient in turmeric is called curcumin and it is obtained from the underground stem (rhizome) of the turmeric plant. Curcumin possesses antibiotic, antiviral, anti-inflammatory, and antioxidant benefits.

Health benefits of turmeric include the following disease preventions and treatments.

Research conducted at the University of Michigan, by Ayyalusamy Ramamoorthy in 2009, showed that curcumin in turmeric helps regulate cells by inserting itself into the cell membranes and interfering with molecular pathways that lead to cancer development and spread. This causes the cells to become less susceptible to infection and even to cancer. It has shown its positive effects on the following type of cancers:

Curcumin has shown to improve several aspects of cardiovascular health.

A study recently conducted by a team of Danish and American researchers found that curcumin increases the level of a protein called cathelicidin antimicrobial peptide (CAMP) which fights against bacteria and inflammation.

According to a study conducted by researchers in Thailand, published in the journal Diabetes Care, the curcumin in turmeric has been shown to prevent the onset of diabetes in people who have the highest risk of getting the disease.

The study conducted on 240 people viewed as having pre-diabetes, characterized by high blood sugar levels, involved the administration of capsules containing 250mg of 'curcuminoids', curcumin supplements. The researchers attribute these benefits to curcumins ability to fight inflammation and oxidative damage to the body cells.

Curcumin, the most active curcuminoid found in turmeric, has been shown to possess varied beneficial effects in the treatment of cancers, cardiovascular disease, and inflammation. With this knowledge, many research groups around the country are focused on the use of this plant-derived chemical in humans. Turmeric is already a common ingredient of antioxidant, immune boosting and heart health supplements popularly being sold in the market today. It is also available as a individual high potency supplement in the form of capsules or tablets.

The nutritional values of "Spices, turmeric, ground" per 100 grams are:
Data source: USDA Nutrient Database, R25
*Percent Daily Values (%DV) are based on a 2,000 calorie reference diet. Your daily values may be higher or lower based on your individual needs.
To See Full Nutrition Facts & Analysis for Spices, turmeric, ground - click here

Latest Publications and Research on Turmeric

Compound Responsible for Yellow Color in Turmeric Boosts Immune System
A compound that is responsible for the bright yellow color in turmeric has been found to boost the immune system in its fight against infections.
READ MORE 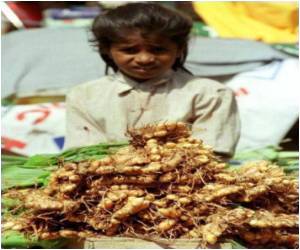 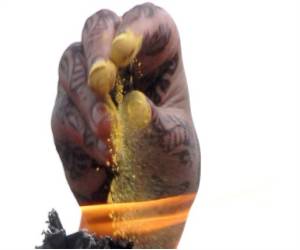