Paleolithic Diet, also known as the Paleo-diet or a cavemans diet, is a diet plan inspired by our great, great, great granddads who lived in the stone age. The Paleolithic diet includes foods that can be hunted and fished, such as meat, and seafood, and food items that can be gathered, such as eggs, fruits, nuts, seeds, vegetables, insects, mushrooms, herbs and spices. Food preparations should mainly avoid refined grains, refined sugars and refined oils.

Paleo-diet was first popularized by gastroenterologist Walter Voegtlin and following his lead, many dietitians and scientists explored further to reveal the facts behind this diet. Earlier, this diet did face a good amount of controversies, but finally emerged victorious, its pros outweighing the cons.

The reason why scientists believe that a Paleo-diet could be better than a modern diet is the fact that human genes have modified over the time, to adapt to the agricultural changes, as a result of which diet-related ailments started to crop up.

Lactose intolerance, diarrhea, colitis and other digestive ailments are thought to be a result of the manipulated genes. A Paleo-diet is thus, thought to be the best diet, having maximum benefits for the human body, minus the side effects.

Basically, a Paleo-diet consists of raw, fibrous and unprocessed foods, which aids in digestion and boosts immunity.

Heres why you should try the Paleo-diet:

Weight loss: People on weight loss programs have a reason to rejoice! Studies suggest that Paleo-diets are more efficient at weight loss than other diets. The food groups in the Paleo-diet tend to make it more feeling-full per calorie than in other diets, including the Mediterranean diet.

Reduced diabetic risk: Studies show that we obtain almost 70 percent of the total energy from grains, cereals and other high GI (glycemic index) foods. In contrast, a Paleo-diet has much lower GI values, which is beneficial for diabetic patients considering the fact that it helps maintain a stable blood sugar level.

Elimination of toxins: It doesnt take a brain surgeon to figure out what toxin accumulations can do to your body. Including Paleolithic meals can help the body get rid of toxins, keeping episodes of acne, diabetes, rheumatoid arthritis and even cancer at bay. It also reduces the risk of auto-immune diseases to a considerable extent.

Fewer adverse reactions: People suffering from lactose intolerance and other forms of dietary allergies are advised a Paleo-diet. This is because a Paleo-diet is devoid of all the foods that could possibly contribute to these allergies. In fact, many people reported being more cheerful, active, energetic and allergy-free after a week of following a Paleolithic diet.

Apart from this, people following Paleolithic diets demonstrated a lower risk of cardiovascular ailments and had lower blood cholesterol levels than others. So, try out this best diet and enjoy the benefits.

Caveman Diet Gains Traction
It is ironic that in these modern times, the question being asked is, could Paleolithic man hold the key to today's nutrition problems?
READ MORE 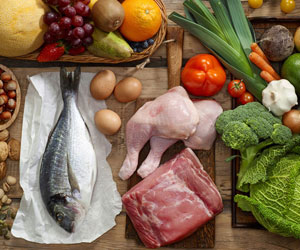 Paleo Diet
All that you wanted to know about Paleo diet, the foods, benefits, risks. It is a low carbohydrate, low sodium, no grain and no dairy diet that promotes health.
READ MORE
Sign up for Wellness Consult a Doctor Sign up for Selfcare