Medindia » Lifestyle and Wellness » Tattoos  A Body Art - About

Tattoos are a rage among college students who sport it for the cool dude or cool babe look.

Melanie was clenching her teeth as tattoo artist etched body designs on her. Melanie was a tattoo aficionado and had various designs of multiple hues done on her body. This time there was a difference - the artist was etching a flower design on her flesh. No ink was used. She had reached her pain threshold but she hardly seemed to mind. Melanie was stretching her limits and experimenting with the emerging trend of scarification, a form of body modification, that can trace its roots to sadism!

In our daily life we have seen tattoos of all shapes, sizes, intents, purposes and design. Tattoos are a rage among college students, especially those in the West, who sport it for the cool dude or cool babe look. 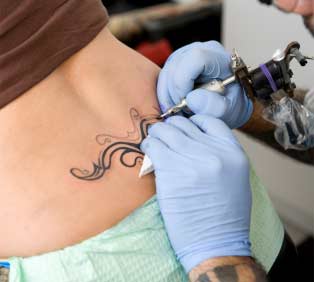 A tattoo is a permanent design or marking that is created mostly for decorative purposes, by introducing colored ink into the surface layers of the skin. They are also referred to as Tats, Art, Ink, or Work. A tattoo on the lower back of a woman is condescendingly referred to as the tramp stamp.

A number of mainstream art galleries have come forth to support traditional and designer body art, as tattooing has come to be lovingly referred to. Enthusiasts, with a passion for  tattoos, cherish it as artwork and consider tattooists as artists who work on the body, as on a canvas.

The word "tattoo" is believed to have originated from the Polynesian word tatau, meaning to mark or strike twice (a reference to the traditional methods of tattooing designs). The first tattoo was probably born from an accident, when a wounded person was smeared with soot gathered from the fire. The wound would have healed, but the mark made by the soot might have remained to become a precursor to modern day body designs and tattoos.

Tattooing is a widespread practice, popular among most cultures of the world. It has been a popular Eurasian practice since the Neolithic times. Mummies from Egypt and Pazyryk in Russia have been unearthed with tattoos on their bodies.

Tattooing has been in existence in Japan since Paleolithic times. The indigenous people of Japan, called the Ainu, followed a custom of wearing facial tattoos and employed a hand method of tattooing called the Tebori.

Captain James Cook chanced upon the Polynesian people of Marquesas Island during his voyages. He made a reference to their custom in his diary,. they print signs on peoples body and call this tattaw. The sailors who sailed with him introduced the custom to Europe.

The maoris of New Zealand, people of Polynesian descent, Africans, South American and tribal populations the world over, including India, have indulged in various forms of tattooing. It ranges from smearing ashes on wounds to bruising, pricking or making cuts on the skin to apply colored dyes.

Today tattooing is carried out in licensed tattoo studios, in hygienic conditions, where state-of-the-art equipments are employed for tattooing. It has come of age in North America and Europe, with tattoos or body designs aggressively competing for space with mainstream art.

Latest Publications and Research on Tattoos A Body Art

AIDS/HIV - Common Opportunistic Infections
Kaposi sarcoma develops below the skin surfaces or in mucous membranes of mouth, nose or anus and appears as lumps