'Quinoa can play an important role in eradicating hunger, malnutrition and poverty, said the FAO Director-General José Graziano da Silva while declaring the year 2013 to be the International Year of Quinoa.

Originating in the Andean region of South America, quinoa has now been singled out by the FAO as food with high nutritive value, impressive biodiversity, and an important role to play in the achievement of food security worldwide.

So, what is quinoa? A pseudocereal rather than a true cereal, quinoa is a grain-like crop grown primarily for its seeds. It is an annual plant growing to a height of 1 to 2 meters.

Although, it is hard to find in India, it is, in fact, becoming popular amongst the health conscious Indians, especially those stuck to organic food. So much so, the crop is all set to be cultivated extensively in the drought-prone Anantapur district in Andhra Pradesh under a government rural development project, as it is a hardy crop and economically beneficial to the farmers growing the crop.

There are many varieties of quinoa, but the white, black, and red are the most common (read popular) ones. All the varieties contain bitterness causing saponins, but these are removed by processing the grains.

Red quinoa holds its shape after cooking a bit better than white quinoa, and is therefore, more suitable for salads or other recipes where a distinct grain is especially desirable.

Black quinoa keeps its striking black color when cooked and is sweeter than the white quinoa.

Quinoa flakes are created by steam-rolling the whole grain kernel. Flakes cook faster than whole grains, and as quinoa cooks very quickly, it makes for a great instant breakfast.

With only 120 calories per 100g of cooked grain, quinoa is one of the superfoods highly acclaimed by nutritionists and medical experts.

The quinoa has been called a pseudo-cereal for botanical reasons but also because of its unusual composition and exceptional balance between oil, protein and fat, says the research team from Universidad de La Serena, Chile.

Quinoa has been recognized as a complete food due to its protein quality. It has remarkable nutritional properties; not only from its protein content (15%) but also from its great amino acid balance.

Quinoa is fantastic wheat- and gluten-free choice, probably the least allergenic of the grains. Like buckwheat, quinoa has an excellent amino acid profile, not only because of its absolute high protein content but also because it contains all the essential amino acids. Quinoa is an excellent protein source for vegans, suggests Michael T Murray, a Naturopathic Medicine expert.

Quinoa is an important source of minerals such as phosphorus and is high in magnesium and iron. Quinoa is also a source of calcium, and thus, is useful for vegans and those who are lactose intolerant. Scientists have found that the calcium, zinc and iron content in quinoa are higher than in common cereals.

Quinoa contains significant amounts of tocopherols (vitamin E) and riboflavin (vitamin B2). Some consider it an oil crop, because of its high omega-6 content.

The grain contains compounds like polyphenols, phytosterols, and flavonoids such as quercetin and kaempferol.

Quinoa is a good source of dietary fiber, a cup of quinoa containing 48 percent of the daily recommended value of dietary fiber. It also has a high proportion of D-xylose and maltose, and a low content of glucose and fructose, making it right for malted drink formulations.

Quinoa has high nutritional value and has recently been used as a novel functional food that helps lower risk of many diseases.

Reduces Risk of Migraine  The findings of a study published in the Journal of Pain Research show that beta-blockers along with riboflavin (vitamin B2) therapy supplied with an appropriate diet could significantly decrease in migraine frequency, intensity, duration, and medication intake by improving oxygen transport to the cells. Similarly, magnesium helps prevent constriction of the blood vessels. Since, quinoa is rich in magnesium and riboflavin as well, it may help reduce the risk of migraine headaches.

Improves Cardiovascular Health  Studies have shown that deficiency in magnesium increases the hormone (angiotensin II) that is responsible for increasing blood pressure. In view of this, the magnesium-rich quinoa may very well prevent high blood pressure and related conditions. To top it, quinoa is rich in quercetin that is beneficial in atherosclerosis (hardening of arteries), circulation problems, and heart disease.

Diabetes  Quercetin, present in quinoa, is also beneficial in diabetes, peptic ulcer, asthma, inflammation, viral infections, as well as in preventing cancer and for treating chronic prostate infections. Reports on quinoas effect on diabetes are, however, contradictory. Research has revealed that quinoa has no alpha-amylase inhibitory activity that is necessary to control diabetes. Again, quinoa is a good carbohydrate choice for someone with diabetes, according to the American Diabetes Association, though they say that all whole grains are helpful.

Helps Prevent Gallstones  The high content of insoluble dietary fiber in quinoa can reduce the risk of gallstones by lowering blood triglycerides and reducing the stagnation of bile, the factors that aid gallstone formation.

Helps in Weight Loss  Quinoa is great food for weight loss. First, it is a zero-cholesterol, low-fat grain. Second, it is rich in dietary fibers that helps keep the feeling of satiety thus reducing hunger pangs and cravings. Last but not the least, the grain has twice the protein of regular cereal grains, contains less simple sugars and more complex carbohydrates, more healthy fats, and other vitamins and minerals necessary for weight loss.

Since quinoa is a new food, most will not know how to cook this seed or grain. Fortunately, a variety of dishes can be cooked, given the remarkable nature of this easily-prepared, nutrient-rich food. Here are a few recipes 

This dish is very similar to the traditional lemon rice. The only difference is instead of rice you use quinoa and also add some fresh spinach or other greens to make it wholesome.

Simple recipe to use quinoa in your daily breakfast routine

Heat oil in a heavy bottomed pan; add half a spoon each of mustard, cumin, channa dal, and urad dal, and a pinch of asafetida (in the same order). You can also add curry leaves. Once the dals become golden brown, add in onions and salt. Sauté until the onions are tender and turned translucent.

Stir in the green chilies, carrots and peas and sauté for a few minutes. Finally, add a cup of cooked quinoa, cover the pan and simmer for about 5 minutes.

Turn off the heat, garnish with coriander leaves and serve hot.

The nutritional values of "Quinoa, cooked" per 100 grams are:
Data source: USDA Nutrient Database, R25
*Percent Daily Values (%DV) are based on a 2,000 calorie reference diet. Your daily values may be higher or lower based on your individual needs.
To See Full Nutrition Facts & Analysis for Quinoa, cooked - click here

Latest Publications and Research on Quinoa

Milk from Nuts, Quinoa and Grains Found to be Good for Health
Milk is a vital component of our daily food and is loaded with health benefits. Milk has always bee known to boost calcium levels and it is highly recommended to include milk in our diet everyday.
READ MORE 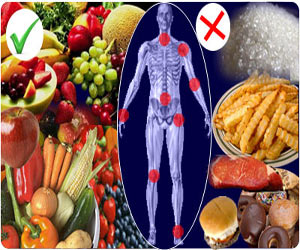 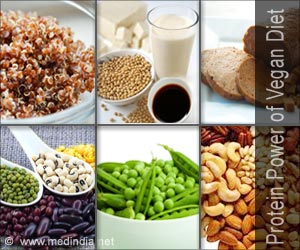 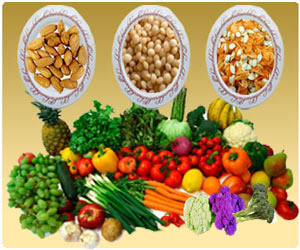 Seeds: Nutrient Packed Germs of Life
Seeds are the germ of life. They are loaded with goodness and should be included in the daily diets.
READ MORE
Sign up for Wellness Consult a Doctor Sign up for Selfcare