The pomegranate or Punica granatum L, belongs to the family Punicaceae. The pomegranate tree is a native, ranging from Iran to the Himalayas in north India. It has been cultivated since ancient times throughout the Mediterranean regions of Asia, Africa and Europe. It traveled to central and southern India from Iran around the first century A.D. It is cultivated throughout India and arid parts of southeast Asia, Malaya, the East Indies and tropical Africa. It mostly grows in Egypt, China, Afghanistan, Pakistan, Bangladesh, Iran, Iraq, India, Burma and Saudi Arabia.

The fruit is a rich source of vitamin C (a natural antioxidant), magnesium, potassium, and copper.

In some countries, such as Iran, the fruit juice is very popular. In northern parts of India, this wild fruit is used for the preparation of anardana powder where the juice sacs are dried in the sun for a few days and then sold as a spice.

A free radical is capable of targeting and damaging biologically relevant macromolecules such as DNA, proteins, nucleic acids, carbohydrates, and lipids thus resulting in an imbalance of homeostasis.

The human body is in a constant battle to prevent aging. Many of the pathological changes in diseases as well as the aging process itself, show a link to these reactive and potentially destructive free radicals. The mechanism of aging attributes to DNA or the accumulation of cellular mitochondria. As the body ages, the cells struggle to recycle the mitochondria also called the powerhouse of the cell. Mitophagy is the process by which the damaged mitochondria are removed. This process becomes less efficient and the cells end up cluttered with old and poorly functioning mitochondria. The accumulation of dysfunctional mitochondria affects the health of many tissues and muscles and also plays a role in aging. The increasing age-related oxidative stress seems to be a consequence of the imbalance between the free radical production and antioxidant effect. Oxidative modifications have been shown to occur in of DNA, protein, and lipid molecules. Elevated levels of both oxidant-damaged DNA and protein have been found in aged organisms.

Antioxidants in Pomegranate and Its Role in Anti-Aging

The chemical composition of pomegranate can differ depending on the region, maturity, cultivation practices, climate, and storage circumstances. About 50% of the total fruit weight lies in the peel, which is an important source of bioactive compounds such as phenolics, flavonoids, ellagitannins, and proanthocyanidin compounds. They constitute the main group of antioxidants that are important due to their free radical scavenging activities. It has minerals such potassium, nitrogen, calcium, phosphorus, magnesium, and sodium, and complex polysaccharides. The edible part of the pomegranate fruit (50%) consists of 40% arils and 10% seeds. Arils contain 85% water, 10% total sugars, mainly fructose and glucose, and 1.5% pectin, organic acid, such as ascorbic acid, citric acid, and malic acid, and bioactive compounds such as phenolics and flavonoids, principally anthocyanins.

Pomegranate juice contains antioxidants such as polyphenols and punicalagins. It contains antioxidants at higher levels than many other fruit juices. Ellagitannins and hydrolyzable tannins were detected and quantified in the pomegranate juices which account for the high antioxidant activity of the fruit. A natural metabolite of ellagitannins, is converted to Urolithin A also called as, 'miracle molecule', by the microbes in the gut. This miracle molecule encouraged the process of mitophagy or removal of damaged and accumulated mitochondria from the cells. This helps fight the process of aging by reviving the cell function and preventing their damage.

Punicalagins, another potent antioxidant, is responsible for pomegranates main antioxidant activity. The activity was seen to be higher in juices extracted from whole pomegranates than in juices obtained from the arils only. Analyses of the juices revealed that juices contained the tannin punicalagin while only traces of this compound were detected in the juice obtained from arils in the laboratory.

Anthocyanins are flavonoids present in fruits and vegetables that render them vivid red and blue colors. Anthocyanins, give pomegranates their deep and intense red color. Anthocyanins appear to provide analgesic effects. In a comparative analysis, anthocyanins in pomegranates were found to possess higher antioxidant activity than vitamin-E (á-tocopherol), â-carotene, and ascorbic acid.

Pomegranate is a nutrient packed fruit rich in phytochemical compounds. Plants produce low molecular weight compounds broadly called as phytochemicals, usually as a mechanism of defense. Some plants contain distinct families of phytocompounds, which are structurally similar to steroid and estrogen sex hormone called estradiol, and compete with the endogenous hormone in binding to estrogen receptor (ER), thus reducing the hormonal effect of endogenous estrogens. These compounds are termed as phytoestrogens. Most of these are present in the diet are inactive compounds, which on consumption, undergo a series of enzymatic changes in the gastrointestinal tract, resulting in the formation of compounds having structure similar to that of estrogens. Phytoestrogens have captured major research and clinical attention due to its effectiveness in the treatment and prevention of peri-menopausal and menopausal symptoms, over hormone replacement therapy (HRT). It can also function as antioxidants and protect DNA from oxidant-induced damage

Research on pomegranate is gaining momentum due to its tremendous nutritional values and medicinal uses.

Two principle mechanisms of action have been proposed for antioxidants. The first involves a chain- breaking mechanism by which the primary antioxidant donates an electron to the free radical present in the systems. The second mechanism is the removal of reactive nitrogen species initiators (secondary antioxidants) by quenching chain-initiating catalyst. Some of such antioxidants, including glutathione, ubiquinol, and uric acid are produced during normal metabolism in the body. Others are found in the diet. Although there are several enzymes system within the body that destroy free radicals, the principle antioxidants are vitamin E (á-tocopherol), vitamin C (ascorbic acid), and B-carotene. Since the body cannot manufacture these micronutrients, they must be supplied in the diet. Recent research suggests that antioxidant may even positively influence life span. Antioxidants are known to provide several heart-protecting benefits, including reducing low-density lipoprotein (LDL) cholesterol. The antioxidant activity of pomegranate juices was assessed and compared to that of red wine and a green tea infusion. Commercial pomegranate juices showed an antioxidant activity three times higher than those of red wine and green tea.

Other Health Benefits of Pomegranate

Regular intake of pomegranate juice helps in a smooth blood flow. Because of this property, it helps maintain a healthy level of blood pressure and subsequently decreases the risk of heart attacks and strokes. The high level of antioxidants in the fruit helps in reducing the LDL cholesterol. The clots get cleared because pomegranates have the ability to make the blood thinner. The damage that are caused due to the thickening known as atherosclerosis and hardening of the arterial walls can be reduced.

In stomach disorders the pomegranate peel, bark and leaves are used to calm disorders of the stomach or diarrhea. Drinking tea made from its leaves also helps in curing digestive problems. Pomegranate juice is also found beneficial dysentery and cholera.

Pomegranates are also rich in flavonoids. The flavonoids are known to be effective in acting against various cancer radials. Pomegranate contains natural aromatase inhibitors that inhibit the production of estrogen, which can reduce breast cancer risk. The unique biochemical composition of the pomegranate fruit has recently drawn attention of many investigators to study its exceptional healing qualities. In preclinical animal studies, oral consumption of pomegranate extract inhibited the growth of lung, skin, colon and prostate tumors. With its anti-angiogenic properties, they may help to prevent growing tumors from acquiring a blood supply, preventing those tumors from receiving the nutrients.

The rind of the fruit has anti-bacterial and astringent activity. Oral diseases start with a plaque. Dental plaque which is a sticky film of food, saliva and bacteria, is comprised of a population of bacteria growing on the tooth surface enmeshed in a polysaccharide matrix. The researchers have shown that many of the antioxidants can inhibit the formation of the plaque polysaccharide matrix, block the adherence of bacteria, prevent acid formation and reduce acid tolerance of microorganisms. Recent studies demonstrate that pomegranates can support oral health and has proved to be a useful remedy for strengthening gums and fastening loose teeth.

The nutritional values of "Pomegranate" per 100 grams are:
Data source: USDA Nutrient Database, R25
*Percent Daily Values (%DV) are based on a 2,000 calorie reference diet. Your daily values may be higher or lower based on your individual needs.
To See Full Nutrition Facts & Analysis for Pomegranate - click here 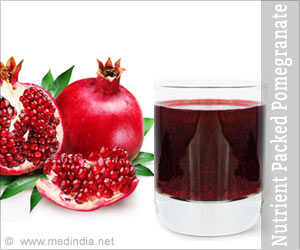 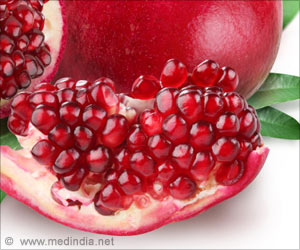 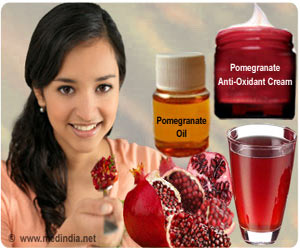 Superfood Pomegranate for Beauty and Wellness
Pomegranate is a naturally occurring mystical and miraculous superfood with multiple therapeutic properties. Since centuries, pomegranate has been revered as a sacred symbol of prosperity, fertility, youthfulness and a life giving fruit.
READ MORE
Sign up for Wellness Consult a Doctor Sign up for Selfcare

Pomegranate and Its Role in Anti-aging - Related News