What are Omega 3 Fatty Acids?

Polyunsaturated fatty acids (PUFAs) including omega-3 have drawn much attention in this era of obesity and metabolic syndrome.

Fats made up of glycerol and fatty acids, are absorbed into our body through intestines and are then stored in the hypodermis (the layer of skin made up of connective tissue and fat), muscle, and liver of our body. Later, they are broken down to provide energy.

There are several types of omega 3 fatty acids, but three of them are crucial  ALA (alpha-linolenic acid), EPA (eicosapentaenoic acid), and DHA (docosahexaenoic acid).

ALA is primarily found in vegetables and vegetable oils such as Brussels sprouts, kale, spinach, salad greens, and oils such as soybean, rapeseed (canola), and flaxseed, and walnuts. The body partially converts ALA to EPA and DHA.

DHA is essential for the development of the brain, nerve and eye tissue, especially in infants, so DHA is abundantly found in breast milk. Fatty fish is a rich source of DHA.

EPA, on the other hand, acts as a precursor for compounds that regulate the proper functioning of the heart and blood vessels and inhibit platelet aggregation. It is abundantly present in human milk, and seaweeds. It is also present in oily fish, occurring along with DHA.

DHA and EPA found together only in fatty fish and algae, are considered to be more effective when they are working together rather than individually. For example, EPA and DHA together insulate the body against heat loss and prevent skin from drying. 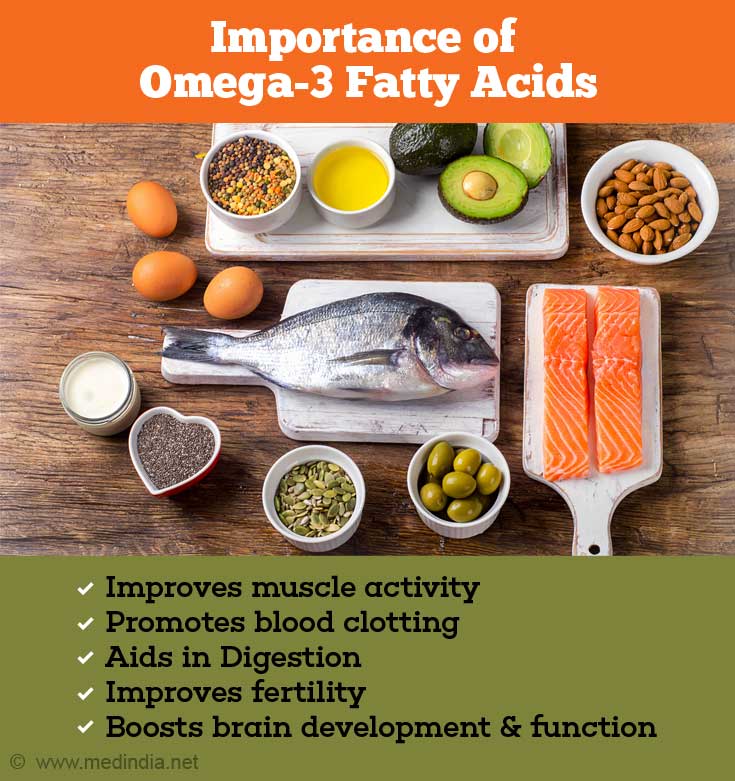 Omega-3 fatty acids are essential during the growth and development of the fetus. Thats why pregnant women or those who are breastfeeding are advised to consume sufficient omega-3 foods.

Advantages of Eating Fish Foods
Researchers worldwide have discovered that eating fish regularly is good for health. Regular consumption of fish may reduce the risk of diseases such as asthma, prostate cancer and eyesight.

Lifestyle Paths to Heart Disease
Heart disease can be of many types depending upon whether they involve the heart muscles or artery walls or heart beats. Bad lifestyle choices contribute to heart disease.

Quiz on Vegetarian Diet
Vegetarian diets are becoming the new trend of healthy eating and people are looking for vegetarian substitutes for meat and fish. Test your knowledge on vegetarian diet by taking this ...

Tips for Healthy Grocery Shopping
Healthy grocery shopping is not only about counting calories and checking food labels, but about selecting fresh and seasonal foods and cooking them right.