Parkinsons disease is a brain disorder, which leads to many other related effects. Nutrition plays an important role in management of the disease.

Parkinson's disease is a brain disorder which occurs when certain nerve cells or neurons are damaged and the brain part called substantia nigra become impaired. Symptoms of Parkinsons disease appear when cells producing a vital chemical called dopamine diminish in the body, which leads to lack of coordination between bodys muscles and therefore interferes with movement.

Parkinsons disease results due to an interaction between inheritance and environmental factors. There is a marked loss of dopaminergic neurons (pigmented cells) in the substantia nigra as well as of tyrosine hydroxylase, the rate-limiting enzyme for dopamine. Three theories are postulated for the cause of Parkinsons disease: altered dopamine metabolism due to neural injury, exposure to environmental neurotoxins, and predisposition theory.

Nutrition plays a very important role in the management of Parkinsons disease. Nutrition does not cure its progression but impacts many aspects of health. Parkinsons disease can slow down the peristaltic movements of the digestive tract, causing constipation, slowed stomach emptying, and swallowing problems; it can lead to loss of the sense of smell, and of taste. Patients with Parkinsons disease are at increased risk for malnutrition; yet, with attention to diet, one feels better and can prevent hospitalization. 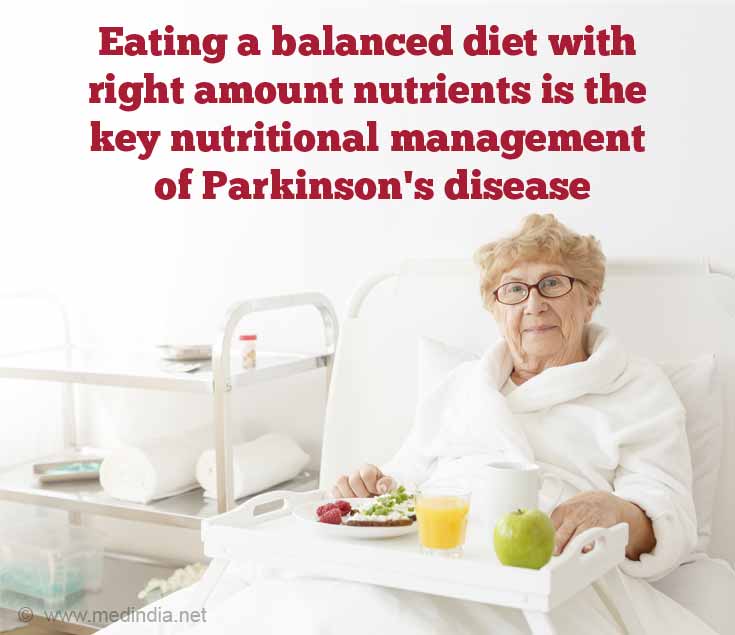 Medications used to treat this disease can cause nausea and appetite loss. Also, one of the most important medications, levodopa, must compete with protein for absorption from the small intestine.

There is no single optimal diet for Parkinsons disease. The diet depends on the dietary needs of the patient based on the age, gender and other complications like hypertension, diabetes mellitus, food allergies, etc. Also, medications for Parkinsons disease and other medications like those taken for heart disease may have side effects, according to which the diet may have to be altered.

The aim of diet therapy in patients with Parkinsons disease is to identify nutritional inadequacies at an early stage, implement measures to correct deficiencies or nutrition-related problems, find ways to minimize any practical difficulties associated with eating or swallowing, prevent undesirable weight gain or loss, lessen the impact of drug-therapy side effects on dietary intake, and monitor the patients nutritional status as the disease progresses.

Regulation of intake of proteins, carbohydrates, fluids, fibers and some other nutrients is very important in the nutritional management of Parkinsons disease.

Protein regulation in Parkinsons disease: Along with a balanced diet, about 0.5 g of protein/ kg body weight/ day (25-35 g protein per day) is recommended. This amount is divided equally among three meals, morning, midday, and dinner. Some scientists suggest that use of protein-restricted diet is a safe and simple technique to extend the usefulness of carbidopa/ L-dopa therapy in advanced Parkinsons disease. Patients should make sure that the levodopa should be taken at least 30 minutes before meals; if there is need to eat snacks between meals, choose those with little or no protein like fruit, juices, etc.

This plan advocates restricting protein intake to 7  10 g during the day in order to maximize absorption of the drug and minimize motor fluctuations. It also advocates consuming most of the protein in the evening when poorer motor functions are less likely to disrupt a persons lifestyle. This plan is well tolerated by most but is not ideal, because mobility is greatly reduced during the nighttime, and many people find they have difficulty turning in bed, or getting up at night. Some people then forego eating any protein in the evening, so as to have better control of Parkinsons disease symptoms throughout the night; such deprivation leads to protein starvation and illness, and even hospitalization. Thus, good motivation, and dietetic education and support should be given while prescribing this diet plan.

Carbohydrate intake in Parkinsons disease: High-carbohydrate (high-carb) plan is recommended to people with Parkinsons disease. A person with the disease should eat meals that consist of a ratio of five-to-seven parts carbohydrate to one part protein (5:1 to 7:1). carbohydrates are broken down into glucose and proteins are broken down into amino acids where they enter the blood stream. A high proportion of carbohydrate to protein causes release of large amount of insulin hormone, which removes specific amino acids from the blood stream and lowers the competitive interaction between amino acids and Sinemet (a medication to treat Parkinsons disease which is a combination of levodopa and carbidopa). The high-carb meal plan appears to work well for about two-thirds of the people who try it.

Benefits of having Adequate Fluids in the Diet

Urinary tract infections: Bladder and urinary tract infections are common in older adults and people with Parkinsons disease as the thirst sensation is blunted in them. Therefore, patients with Parkinsons disease don't feel thirsty, even when fluids are needed. Elderly people have a tendency to get into state of dehydration for longer periods which allows bacteria to grow and multiply in the bladder and urinary tract causing infections. Therefore, adequate fluid intake should be maintained. Another good remedy to ward off urinary infection is use of cranberry juice.

Dry mouth, dry eyes, and thirst: There are more reasons for adequate fluid intake. Some people report that they often feel thirsty and sometimes have dry mouth, thick or sticky saliva, and dry eyes. Dry mouth may also be caused by difficulty with swallowing, sleeping with the mouth open, or mouth breathing while awake. Various reflexes are deteriorated in patients with Parkinsons disease including the blinking reflex, resulting in less frequent blinking in the individual patient. This makes the eyes tired, dry and itchy even when person is on adequate amount of water. Acute thirst can be a sign of severe dehydration, which can even lead to death.

High Fiber Diet in Parkinsons disease: The diet should be high in fiber and fluids to avoid constipation that is often caused by medications for Parkinsons disease. Laxatives stimulate the nerve endings of the colon, causing rapid removal of bowel contents. Over time, stimulant laxatives damage the lining of the colon, causing even greater difficulty with constipation. Therefore, consumption of laxatives should be avoided. Both soluble and insoluble form of carbohydrates should be included in the diet. Whole grains, pulses, fruits and vegetables with edible skin should be included in the diet. Fiber intake should range from 25 to 35 g/ day. Fluids are as important as fibers as without fluids, fiber particles remain dry and harden which leads to constipation. Ten to twelve glasses of liquid intake should be aimed for. 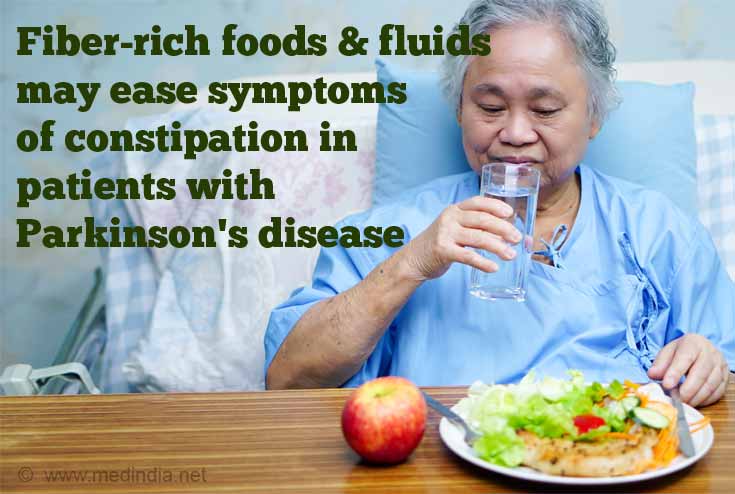 Other nutrients and Parkinsons disease

Vitamin B6: It was observed that vitamin B-6 hampers the absorption of levodopa; so patients with Parkinsons disease are advised to refrain from foods rich in vitamin B-6.

Antioxidants: It has been suggested that high dietary intakes of antioxidants may be protective against the development and progression of the disease. A study showed that higher intakes of vitamin E which is an antioxidant had protective effect against Parkinsons disease whereas higher consumption of â-carotene did not make a significant change in the risk of developing Parkinsons disease

Aspartame: Some studies showed that that aspartame consumption in amounts well in excess of what would be consumed by heavy users of aspartame-sweetened products has no adverse effect on Parkinsons disease patients. Thus, aspartame may be used by these patients with diabetes.

Various conditions are associated with Parkinsons disease, which needs a well-planned management of diet to control them.

Therefore, the patient should train himself to honor the urge to have a bowel movement. Alterations in height of the toilet seat may help in movement and mobility but are not very ideal for emptying reflex. Raising ones feet may help them to evacuate.

Patients should consume a diet high in calcium and include high-calcium sources such as milk and milk products, dark green leafy vegetables, and sesame seeds in their diets. Vitamin D is another important vitamin for bone development. Therefore, exposure to sun may be necessary or vitamin D supplements may be taken. Magnesium and vitamin K-rich diets should be consumed as they are important nutrients for bone health. 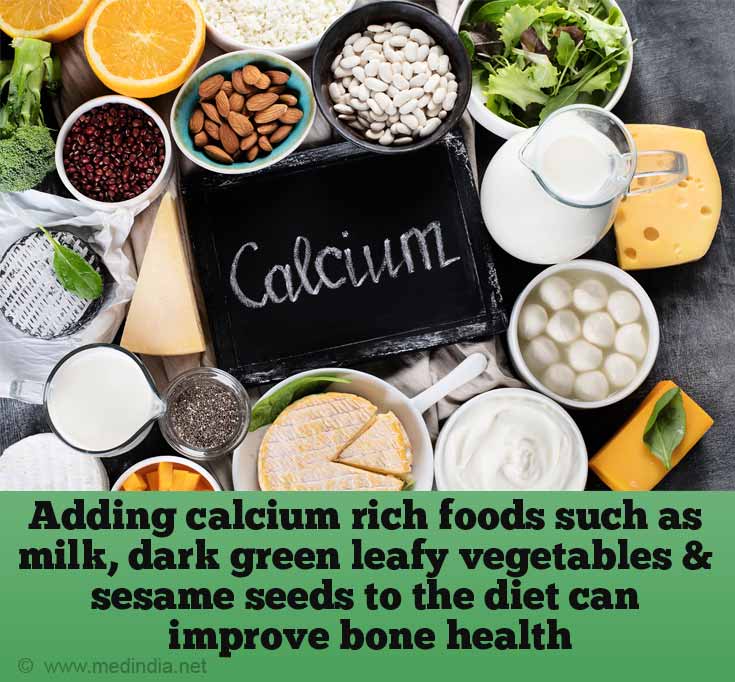 Unintended Weight Loss and Parkinsons disease: All too often, people with Parkinsons disease lose weight, sometimes a critical amount of weight, unintentionally. The possible reason for it can be depression which can cause lack of appetite and reduces desire to eat. Patients sometimes take long hours to eat one meal as they face some chewing and swallowing difficulties. Also, some have difficulty manipulating a fork and knife. Tremor and dyskinesia in addition burn up many extra calories. In other instances, people with Parkinsons disease report their appetites are good, they enjoy eating, and yet still mysteriously lose weight.

Loss of taste and smell: Patients with Parkinsons disease often lose the sense of smell and taste and this affects their appetite. Such patients should force themselves to eat. Well-balanced and spaced-out meals should be planned for them. If weight loss has already occurred, calories should be adequate to allow to regain weight.

Inability to finish meals at time: Several conditions may make it hard to finish a meal. Sometimes bradykinesia (slowed movement) makes it difficult to handle utensils. A person with Parkinsons disease should avoid raw vegetables and lettuce salads. Mechanically altered food like vegetable juices, cooked vegetable and soups could be a better choice.

Some special dietary changes work well in improving the condition of patients of Parkinsons disease.

Various snacks like soya puffs, roasted snacks, cookies, and ice creams can be included in the diet at frequent intervals.

Variety is important; different colored meals are more appealing. Different gestures, cheerful setting and pleasing music can be of help.

Diet for Parkinsons disease patient should be tailor made. It should depend on the co-existing co-morbidities like constipation, weight loss, or other disease like diabetes, hypertension etc.

Snacks between meals are an excellent choice for the patient as they help to control blood glucose. Also, they can help you to regain weight. Three small meals, along with frequent snacks daily can add the extra calories needed to gain weight. Snacks can help prevent heartburn and help fight fatigue.

High protein food should be taken in moderation. Plant protein (dried beans, nuts, and seeds) contains a high ratio of carbohydrates to protein, whereas meat, fish, and poultry contain no carbohydrate.

Latest Publications and Research on Nutritional Management of Parkinsons disease

Helpful article. Parkinson's Disease is a slowly progressive disorder of the central nervous system that affects movement, muscle control and balance. Although the exact cause of Parkinson's Disease is unknown, research has concentrated on genetics, environmental toxins, endogenous toxins and viral infection.

Peppers and Parkinson's Disease
Eating peppers at least twice a week could reduce the risk of Parkinson's disease, according to a recent study.

Parkinsons Disease - Surgical Procedure
Parkinson's Disease is a chronic, progressive, brain disorder common among the elderly. It affects coordination between the brain and the muscles

Quiz on Parkinson's Disease
Parkinson's disease is a disease of the central nervous system. Here's an interesting quiz to find out more about this degenerative ...

Parkinson's Disease - Animation
Slide animation on Parkinson disease. It is a progressive movement disorder due to degeneration of nerve cells of the substantia nigra of the brain. The symptoms get worse with time but drugs or surgery can control them. PD cannot be cured.