A baby is a blessing and a gift from heaven above, a precious little angel to cherish and love. Having a baby is a happy occasion that many couples look forward to. Yet more and more people, both men and women are facing problems with fertility. For many women, not being able to conceive could end up having devastating effects with an overwhelming feeling of depression and disappointment.

We all go through different phases in life. There is a time when one is young and busy with career, when one cant imagine life with children and then when one have them and cant imagine life without them. If trying to get pregnant now, or planning to in the future, it is imperative to identify the risk factors that both partner may have, and to inform doctor right away. The sooner one address and treat the problems that may affect fertility, the better are chances of conceiving.

Female fertility is a woman's ability to conceive a biological child. One need to consult health care practitioner if both partners have been trying to get pregnant with frequent, unprotected sex for at least 6 months to one year but without any positive results.

There are many health factors that could affect a woman's ability to ovulate, conceive or successfully carry a pregnancy to full term:

After being let down by numerous medical therapies, these days many couples are turning to herbs to help achieve pregnancy. Herbal treatments which use different plant parts such as roots, stems and leaves, bark, flowers etc., come in a variety of dosage forms such as tinctures, pills, powders, infusions and decoctions.

Ladys Mantle (Alchemilla vulgaris) is used for adjusting the hormonal imbalance in females. It is not only used to treat fertility problems but some fibroids of the uterus, cervix disorders, and irregularity in menstrual cycle, strengthening of the uterine walls. It helps fight infections and pain of the female reproductive organs because of its tannins, which are anti-inflammatory in nature and flavonoids with estrogenic properties.

Black cohosh (Cimicifuga racemosa) is recommended to be taken in the first part of the menstrual cycle to help boost womans fertility. It should be avoided in women in whom the contraceptive pill is contraindicated.

Yarrow (Achillea millefolium) is known to cure abnormal menstrual cycles and cramps by dilating the capillaries of the reproductive organs and toning the uterine walls and thus improving the blood supply. It is also known to treat vaginal and urinal infections due to its antiseptic properties.

Shepherds Purse (Capsella bursa-pastoris) is known to increase the chances to conceive and carry the pregnancy by toning and strengthening the uterine walls and also by preventing uterine hemorrhages. It also possesses haemostatic and astringent properties, which helps in treating excessive menstrual flow.

Licorice Root (Glycyrrhiza glabra) helps in maintaining appropriate hormonal balance and is also known to fight against the harmful effects of xenoestrogens.

Evening Primrose Oil (Oenothera biennis), is recommended to use this herb until ovulation in women who are trying to get pregnant. It helps in the development of fertilized egg by creating a conducive atmosphere and strengthens the cervix.

Ashwagandha (Withania somnifera) is considered as a good male sexual tonic known to cure impotence and improve fertility. The hopeful father is advised to mix the powder in warm milk and drink one or two cups per day.

Healthy balanced colourful diet: There cannot be a better time than this to improve food habits and up servings of fruits and vegetables. The fitter and healthier, the better are the chances of conceiving. Follow the guidelines of the food pyramid and include various colours of fruits and vegetables. Spinach, green pepper, cucumber, kale top the list in the green colour category whereas in the red it is apples, strawberries and red peppers. For yellow and orange, incorporate bananas, nectarines, lemons and for the blue and purple category, try eggplant, blueberries.

Whole grains: The results of an eight year study conducted in about 18,000 women have shown that foods rich in whole grains, healthy fats, proteins, etc., lead to an improved fertility in women, so go ahead and include plenty of whole grains like wheat, rice, oats, cornmeal, etc., in daily diet.

Omega 3 fatty acids: Many fishes are a rich source of omega 3 fatty acids, which is known to improve fertility. However, to prevent from exposing to the mercury in fish, it is recommended to eat fishes such as catfish, salmon etc., which are known to have little or no mercury. Walnuts, flax seeds and whole grains are also good source. Supplements such as fish oil which contain a mixture of omega 3, omega 6 and omega 9 fatty acids are also beneficial.

Iron: Some studies have shown the beneficial effect of iron in improving fertility. Meat, iron fortified cereals, bean, and asparagus are good sources of iron.

Decaffeinated beverages/alcohol: When trying to conceive, one should limit the amount of tea, coffee or even alcohol, as studies have shown that having too much of these beverages could impair fertility.

Researchers from Sweden have shown that women who drink two alcoholic beverages in a day reduced their fertility by nearly 60%. Drinking in moderation is the key! Switching to the decaffeinated green tea is a good option. However after becoming pregnant, it is recommended to give up alcohol completely to avoid any potential birth defects.

Maintaining a healthy body weight could boost chances of conception. In other words, being underweight or overweight could delay the time it takes for a woman to conceive. Studies have shown that women with pre-pregnancy BMI of 25-39 (obese women) had a twofold increase in the time to get pregnant. On the other hand, in under-weight women who had a BMI of less than 19, the time to conceive increased fourfold.

Follow the "fertile window" in ovulation cycle to boost chances of pregnancy. The fertile window is typically the six days that end on the day of ovulation. It is seen that chances of pregnancy are highest if having an intercourse within the three days before ovulation. It is also a good idea to keep track of ovulation which is done either by the calendar method, figuring when ovulation occurs about 14 days before the menstrual period is due, or by investing in ovulation predictor kit.

Pick vaginal lubricants wisely. Make sure to avoid lubricants which have spermicidal agents. Try and avoid commercially available water-based lubricants such as Astroglide, KY Jelly and Touch which have the potential to inhibit sperm motility by 60% to 100%.

Avoid exposure to pesticides, since certain pesticides especially agricultural pesticides could harm both men and women's fertility. Also, people working in the printing and dry cleaning need to be aware of the fact that certain chemicals and solvents can adversely affect women's fertility.

Give up smoking. Research clearly shows that smoking could potentially damage eggs, fallopian tubes and alters hormones in men and women. It could also lead to ectopic pregnancy (pregnancy in fallopian tube) and miscarriage.

Increase water consumption to at least 8 glasses per day. If in a habit of drinking soda, then there is a need to cut down on that. Also, try and replace regular tea with decaffeinated green tea, which has tremendous health benefits.

Avoid over exposure to heat sources, especially for men. Studies have shown that exposure to high water temperatures like hot water tubs affects mens fertility. There are some reports that indicate that exposure to radiation from cell phones could also adversely affect the sperm count in men.

Reduce stress. Studies have shown that undue stress can lower chances of conception. Hence, it is important to minimize stress and practice healthy coping methods like relaxation through meditation and yoga when trying to conceive.

Schedule regular checkups. Make sure to visit health care provider on a regular basis. Doctor can perform tests to identify any health conditions that might threaten fertility.

So, if trying to conceive, remember that baby is already in the heart, it will be someday in arms too. Be positive, have faith and follow the simple guidelines mentioned above and it will happen sooner than one thinks!

Latest Publications and Research on Lifestyle Factors that Improve Fertility

Meal Timings Could Improve Fertility in Women Suffering from PCOS
Meal timings could prove to be helpful in promoting fertility among women suffering from polycystic ovarian syndrome by impacting menstruation, hormones and ovulation, a new study revealed
READ MORE 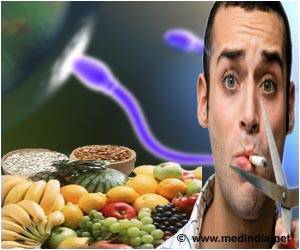 Trying to Get Pregnant? Fertility Yoga may be the Answer
Sherry Longbottom has developed her own brand of fertility yoga to help those trying to get pregnant. Fertility yoga focuses specifically on your reproductive health.Yoga gurus recommend gentle yoga poses of Kripalu or basic Hatha yoga rather than ...
READ MORE