Medindia » Lifestyle and Wellness » How Does The Body React To Stress

How Does The Body React To Stress

Stress is a reaction to a stimulus that causes disturbance to our physical or mental equilibrium, by making one feel threatened or upset. Effects of stress are in the body and mind, in through hormonal changes, muscle reflexes, heart beat patterns and so on. The automatic process in which our body responds to a stress-stimulus is called a flight-fight-freeze response or stress response.

Stress response is the bodys way of reacting to a challenge. The sympathetic nervous system is activated resulting in the flight-fight-freeze response. Such a reaction is useful as the reflexes of the body are activated so that one can escape to a safer situation. It is this reaction that keeps you on your toes for the presentation at work, improves concentration when you need to perform a winning move at a game or drives you to study for an exam instead of lazing around. 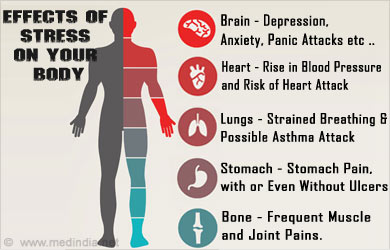 The stress response soon wears off, as the parasympathetic system returns the bodys physiological conditions to normal. Stress response is seen in all living beings, mostly as a reaction of facing the predator. In humans, stress can result in a negative or positive condition that can affect the persons mental and physical well-being. 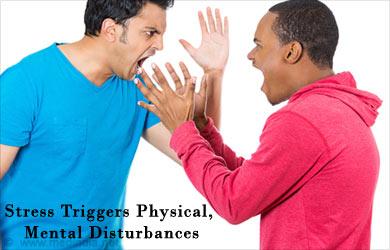 What is the meaning of Fight-Flight-Freeze response?

The Fight-Flight-Freeze response is a combination of release of hormones and the sending of nerve signals that occur as a response to an encounter with the stressor. The physical symptoms of stress on the body include muscle tension, rapid heart rate and breathing and rise in blood pressure. Experiencing butterflies in the stomach, tingling sensations on the limbs and hair standing on the ends are some of the experiences people are faced with during sudden danger.

Fight - An angry reaction and agitated state of mind. The response is to fight the stimulus and overpower it. The body cannot sit still and is keyed up to act. A restless emotional reaction is seen, which could be fear, anxiety or anger, and a fight response includes fighting and overpowering the stressor. 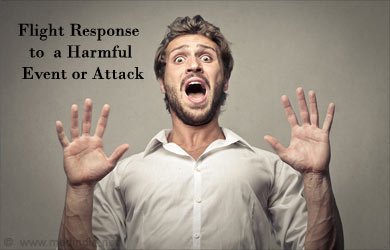 Freeze - The pressure of the situation makes the person freeze and paralyzed. Extreme agitation is going on in the mind, but the body remains frozen and does not react.

The body responds to a threatening situation by releasing a flood of stress hormones. These include corticotrophin releasing hormone, which in turn sets out to release adrenaline and cortisol. On the release of these hormones, the body becomes ready for a reaction. The heart beats faster, muscles tighten up and senses become sharper. There is an increase in blood pressure and breathing rate. A combination of these changes helps improve strength and stamina, speed up the reaction time and improve the focus and concentration. Now the person is ready to fight or flee from the threatened stimulus.

Is Stress Useful or Harmful?

The human body is designed to react to stress as a means of survival skills. Such a hormonal response keeps us alert and instigates a response to avoid or fight danger. In such cases, stress could protect our well-being.

However, constant stress by facing challenges without relief of relaxation becomes harmful. This negative stress reaction is called distress. During distress, the stressful condition of the body does not return to normal, causing long term changes in the heart rate, blood pressure and blood sugar levels.

Use of alcohol, tobacco or drugs as an attempt to relieve stress further damages the bodys response. These substances do not really relieve the stressed state of the body. 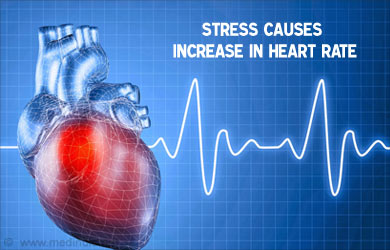 What happens inside our body when faced with danger?

Upon a sudden encounter with the stressor, a stimulus that can be an event or object causing disturbance, the body responds immediately, by activating the -

Homeostasis is a steady state that is constantly present in the body. The body is in constant movement around this homeostasis, a state of flux that is optimum for daily living activities. Any factor that causes this state to divulge too far from homeostasis is the condition of stress. And the body reacts to return to the homeostatic condition, by hastening or speeding up some processes.

The brain plays a key role in the stress reaction, causing a network of stimulus-response reactions in the body. The following are some reactions that can be chalked out, as a response to stress.

Hypothalamus: During a stress response, the hypothalamus secretes corticotrophin-releasing hormone. This hormone, in turn, stimulates the pituitary gland and a heavily regulated stress response pathway is initiated. 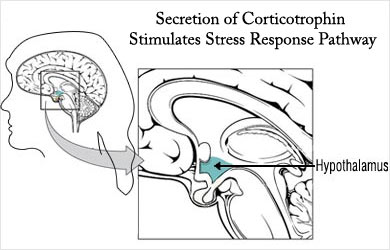 Pituitary gland: As a stress reaction, the pituitary gland releases the adrenocorticotropin hormone that contributes to the stress response system.

Adrenal gland: This endocrine gland is located on top of the kidneys and it releases the hormones called cortisol and norepinephrine, into the blood stream during a stress response.

Changes in the Nervous System and Hormonal Changes

The Hypothalamus produces the neurohormone called Corticotropin-releasing hormone, causing the pituitary gland to release the adrenocorticotropic hormone into the blood stream. The latter reaches the cortex of the adrenal gland to release adrenaline and cortisol.

Cortisol is a steroid hormone and its function is to redistribute energy (glucose) to the brain and major muscles that would be fighting or fleeing.

Other hormonal changes in the blood that are involved in stress response include:

Epinephrine or adrenaline: A hormone released by medulla of adrenal gland. Adrenaline serves as chemical mediator for conveying the nerve impulses to the effector organs like heart, liver and muscles. 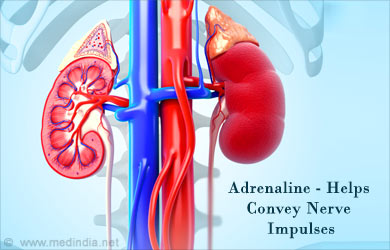 Norepinephrine or Noradrenaline: A neurotransmitter, released from locus coeruleus as a response to stress, serves as the primary chemical messenger of the central nervous systems sympathetic branch that prepares the body for fight-or-flight response. It helps the body to react to stress by increasing heart rate, triggering release of glucose, increasing blood flow to skeletal muscle, etc.

Serotonin: A neurotransmitter, from the brainstem, helps in mood regulation. Serotonin dysfunctions due to stress are associated with anxiety, fear and depression-like symptoms.

Neuropeptide-Y: Produced in hypothalamus, it acts as a chemical messenger in the brain. It plays a key role in appetite, feeding behavior and satiety. It also contributes to anxiety and stress.

Various other parts of the brain like hippocampus, prefrontal cortex, Raphe nucleus, locus coeruleus, etc. come into activation. These parts contribute to the cognitive functions and emotional responses that take place as a stress response.

The hormonal changes and their interaction with muscles and other organs will automatically return to a state of equilibrium, once the stressor stimulus is overpowered or avoided. However, in todays lifestyle, various events, expectations and work pressures act as stressors. The bodys response to these agents that cause constant stress remains for a longer time, without intervals of relief.

The only way to bring back the body to the state of equilibrium is to relieve oneself from these stressors. Taking a break away from work, going on a vacation, change of place, eating out, etc. are some of the stress busters. On a daily basis, yoga, exercise, deep breathing and meditation have helped individuals to think rationally and deal a stressful situation effectively. 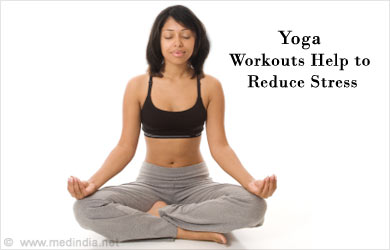 Effects of Stress in The Organ Systems >>

Simple Ways to Deal with Work Related Stress
Work-related stress has many causes and symptoms. But there are ways workplace stress can be managed with ease.

Mindfulness Meditation Helps Cope With Stress and Anxiety
Meditation may not be the answer to all your problems but it does help you fight stress and anxiety.

Dealing with Anger
Anger management has become one of the daily life essentials today. Coping with anger is not tough and this can be done with the help of anger management techniques as suggested by a psychologist.

Stress Busters
Today most of us are under stressful situations which is hard to avoid.Explore our simple and inexpensive stress relief tips.

Overcome Bad Mood with Yoga
Are you irritable or in a bad mood? Learn how you can overcome bad mood with some simple changes to your lifestyle using the basics of yoga.

Psychological Defence Mechanisms
Defense mechanisms help with the coping strategy of the human mind to reduce stress and anxiety caused by a situation or thought. There is a manipulation of thought process to minimize anxiety.

Glycosuria
Glycosuria is an indication of elevated blood glucose levels and a condition in which excess glucose is excreted in the urine.

Adjustment Disorder
Is lifestyle-related stress worrying you too much? Then it may result in a condition called adjustment disorder that can affect both children and adults.

Top 10 Ways to De-stress Your Mind
Chronic stress is bad for physical and mental health. Get best tips on how to de-stress and get on the path to live a healthy and balanced life.

Does Stress Cause Hair loss?
Hair loss due to stress can be a cause for anxiety. Stress causes telogen effluvium, trichotillomania, or alopecia areata.
Sign up for Wellness Consult a Doctor Sign up for Selfcare
Advertisement
Health Topics A - Z
A B C D E F G H I J K L M N O P Q R S T U V W X Y Z

Are Menopause Symptoms Troubling You?: Try these Options
View all
How Does The Body React To Stress - Related News
Acupuncture can Help Regulate Stress Hormone Levels
Inability to Cope with Stress May Increase Risk of Diabetes Among Men
Stress Can Trigger Type 2 Diabetes
More News