What are Whole Grains?

The Romans once regarded oats as a coarse food, only suitable for barbarians and they used it primarily as food for their livestock. It was the Romans however, who introduced the grain to Britain, where it soon became the primary cereal. The world has changed a lot since the days of the Roman Empire and oats have today come to be regarded as the breakfast of champions! After wheat and rice, oats is probably the most widely-consumed form of grain and it is one of the most popular of all breakfast cereals. Whole grain oats are also highly recommended by dieticians and nutritionists because of their low calorie density and high nutrition value. 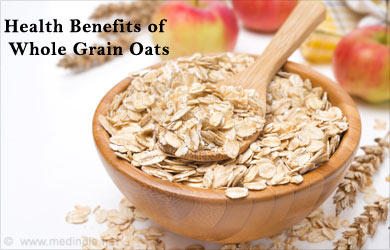 Whole grains are frequently marketed as health foods, along with organic produce and most of us simply know that whole grains are supposed to be healthier, as compared to the refined and processed varieties. While this is true, it would help us to better understand what whole grains are. A whole grain is basically a cereal grain that includes the germ, endosperm and bran, which makes it a lot higher in nutritional value and fiber content. Whole grains come in different varieties such as intact, ground, cracked or flaked kernels.

Most people dont just consume oats for its culinary value, but for its health benefits, so it is advisable to again stick to the whole grain varieties. The intact whole grain form of oats is not widely sold as is, but there are other whole grain varieties available like steel-cut oats. Whole grain oats are referred to as groats. Steel-cut oats are unprocessed and are quite simply chopped groats. They take longer to cook, as compared to instant oats, but they contain the most nutritional value and have a nutty flavor.

Whole grain oat cereal may be best known as a fiber rich food but it does contain many other nutrients.

What are the Health Benefits of Whole Grains?

Whole grains are highly recommended because of their nutritional value and because they do not contain empty calories, as is the case with most processed and refined foods. Whole grains have a high fiber content, which not only aids digestion but a high fiber intake is also associated with a reduced risk of heart diseases, diabetes and cancer. As an added benefit, whole grains can also help you lose those extra pounds and get in shape. Whole grains can be quite heavy and will keep you satiated for a lot longer, thereby reducing your risk of overeating or snacking on junk foods.

Whole oats offer all of the benefits of other whole grains and a lot more:

Provide cholesterol-lowering effect  Beta-glucan, a type of soluble fiber, is found in oats and it helps lower cholesterol. It works by facilitating bile acid excretion and along with it any serum cholesterol thats bound to the bile. Because of its purported effects in reducing LDL, oats may offer protection against conditions like atherosclerosis.

Offer increased protection against LDL damage  Research has also found that avenanthramides, an antioxidant present primarily in oats, exerts an anti-inflammatory effect and could protect the blood vessels from the damage of LDL cholesterol.

Reduce risk of diabetes  The American Diabetes Association advises diabetics to consume whole grains like oats, as studies suggest that the consumption of oatmeal may lower the risk of type 2 diabetes. This benefit is again attributed to the high content of soluble fiber, which helps regulate blood glucose levels.

Provide possible protection from cancer  A few studies indicate that the consumption of oatmeal may offer marginal protection against the risk of chronic diseases and cancer, but research this far has been inadequate. 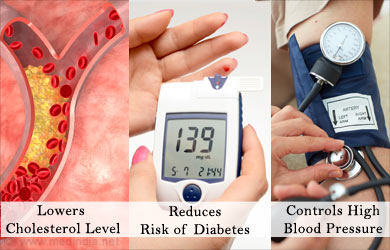 To derive some of the benefits of whole grain oats, try and introduce oats into your cooking. Whole grain oats can be used as an ingredient in numerous recipes and in different forms. You can use it as a thickener in dishes like meatloaf and certain pies or you could even grind it in a food processor and use it as a healthy alternative to breadcrumbs.

Some other interesting ways to use oats include: 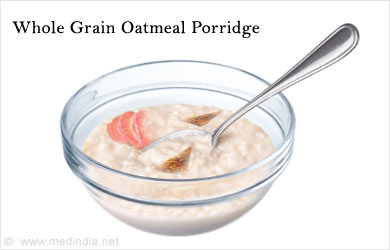 However it is important to keep in mind that whole grain oats are not gluten-free but they do not contain the same type of gluten that poses a risk to people with celiac disease and gluten sensitivity. This said, its important to restrict your intake of oats if you suffer from celiac disease and you should avoid it altogether if you are highly reactive to gluten.

The nutritional values of "Oats" per 100 grams are:
Data source: USDA Nutrient Database, R25
*Percent Daily Values (%DV) are based on a 2,000 calorie reference diet. Your daily values may be higher or lower based on your individual needs.
To See Full Nutrition Facts & Analysis for Oats - click here
Published on Jan 13, 2015
Last Updated on Mar 16, 2021

Benefits of Dietary Fibre
Eating 5 servings of fruits and vegetables a day takes care of the fiber your system needs to a large extent.

Health Benefits of Ragi
Ragi as a whole grain is higher in protein and minerals than all the cereals and millets. Read more on the nutritive value and health benefits of ragi.

Oatmeal can Keep You Feeling 'Full' Longer
A serving of instant oatmeal is more filling than a ready to eat cereal when compared keeping the calorie constant, a new study has found

World Heart Day in 2022- Use Heart for Every Heart
View all
Health Benefits of Whole Grain Oats - Related News
Switch Over from Noodles to Oats for a Slimmer Waist!
Eat Oats for Better Heart Health
Start Off Your Day With Healthy Oats For Breakfast
More News