Stevia rebaudiana is a plant native to South America. The parts of the plant that are sweet are referred to as steviol glycosides. This compound is isolated from the stevia leaves to make the sweetener. But stevia has become the common name for the sweetener that is made from the plant.

Stevia sweetener is available as a powder or in liquid form. It is now becoming a popular sugar substitute across the world. Liquid stevia is mostly used in tea, coffee, smoothies, juices and shakes whereas stevia powder is often used in baked dishes, condiments and sauces. It is 200 times sweeter than sugar and a little quantity of it is enough to sweeten food. 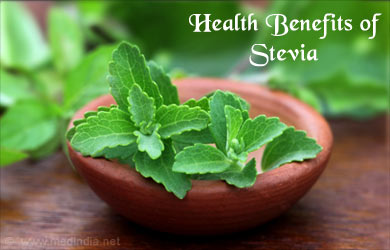 But how safe is stevia sweetener? Stevia is not only considered safe but also has health benefits.

Clinical studies on stevia extract is ongoing and there are no definite findings yet. However, stevia consumption is known to provide the following benefits.

Some studies point to stevia benefits in regulating blood pressure. This is attributed to Stevioside, which is one of the sweet compounds in stevia; the other being Rebaudioside A.

Since stevia contains no calories, it is ideal for those who are trying to lose weight. Sugar contains lots of calories  say about 32 gm of sugar in an average sweet drink may contain approximately 130 calories from sugar alone. Have a drink with stevia and you bypass this extra calorie intake while enjoying a sweet drink. 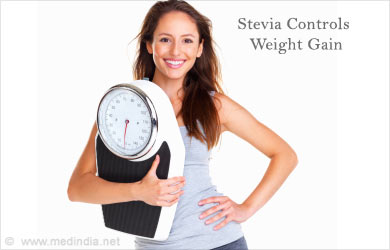 Stevia not being a carbohydrate does not elevate sugar levels in the blood. This makes it safer for diabetics to consume stevia sweetener as compared to sugar intake. Stevioside is considered to lower blood sugar levels and therefore stevia is deemed beneficial for diabetics. But it is advisable to consult your doctor about using stevia if you are a diabetic.

A compound found in stevia leaf extract known as labdane sclareol inhibits the growth of tumors. Other stevia compounds such as stevioside, steviol and isosteviol also help in controlling tumor growth.

Stevia is beneficial for dental health as it is a zero-calorie sweetener so no carbohydrate breakdown occurs in the mouth. Since carbohydrates are not broken down to sugars, which feed the plaque in the mouth, dental caries or tooth decay is delayed. It also contains some bactericidal properties that protect the teeth from decay and other problems such as .

Stevia doesnt affect the renal tubes or harm the renal functions if consumed in moderation. Certain studies show that, steviol inhibits growth of cyst in kidneys and can be used for treating polycystic kidney disease. If sufficient evidence proves this potential of stevia, it could be used in the future for treating various kidney diseases.

Inflammatory Bowel Disease (IBD) refers to several inflammatory bowel problems in the intestines such as and which causes discomfort like diarrhea and abdominal pain. Compounds found in stevia are anti-inflammatory and sooth the intestinal cells. 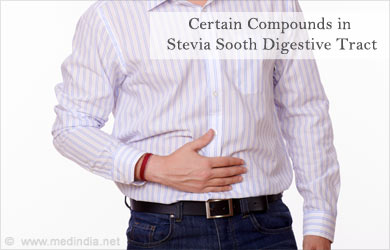 There are still ongoing studies to find out how safe stevia is and if there are any side effects due to its consumption. Allergic reactions, dizziness, upset stomach or body aches are some of the side effects of stevia. Stevia extract might interfere with anti-inflammatory agents, cholesterol lowering drugs or cancer medications. The FDA has approved the use of an isolated stevia compound but not the use of natural stevia leaves. Pregnant or lactating women and those on fertility treatments are also advised to stay away from stevia. So if you dont suffer from any allergies after consuming stevia it is quite safe for you. Those suffering from cancers, diabetes and other medical conditions or on certain medication should use stevia after consulting your doctor.

Stevia can be used to make any dish, which you make using sugar or other sugar substitutes. However do remember that stevia is extremely sweet so do not measure it by your normal sugar quantities. This is achieved by trial and error as you continue to use stevia in your recipes you will have a better idea of the quantity you need to use.

Cook 100 gm of grated pumpkin with 500 ml milk (whole-fat or low-fat) until the texture is creamy. Add chopped nuts to it such as almonds and pistachio. Add 10 raisins and five chopped dried figs. Now add stevia powder to taste. Cool it and then refrigerate for an hour before serving.

Add 10 gm of melted dark chocolate or 5 tsp of dark chocolate powder to 500 gm of flour and mix well. Add stevia powder to taste and 2 tsp almond meal and bake until done. Once it is cooled to room temperature, crumble the dish and add 5 tsp roasted and crushed peanuts to it. You can also add 2-3 tsp of peanut butter for extra flavor. Mix well and eat it with a serving of coffee-flavored ice cream or with fresh cream and chopped strawberries.

Use low-fat yogurt with one ripe banana, one tsp peanut butter and stevia liquid drops to taste. Blend well and drink it up for a healthy breakfast. 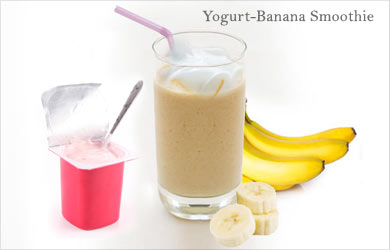 Latest Publications and Research on Health Benefits of Stevia

Comments should be on the topic and should not be abusive. The editorial team reserves the right to review and moderate the comments posted on the site.
Advertisement
Recommended Reading
Quiz on Artificial Sweeteners
With better and safe non caloric sweeteners coming in the market day by day, it has now become possible for people to consume any sweet food /beverage without a compromise on ...

Herb from Paraguay may be Sugar Substitute
Stevia, a herb found in Paraguay, may be a suitable sugar substitute as it is sweeter than sugar, but comes without the added calories.