What is a Pumpkin?

A pumpkin is a type of squash which in turn is a member of the gourd family along with gherkins, cucumbers and melons. Although the pumpkin is generally referred to as a vegetable, it is technically a fruit, as it develops from a flower and contains seeds. Although the term pumpkin can refer to a variety of cultivars, it is most commonly used to identify the Cucurbita pepo cultivar which is round with smooth ribbed skin and is orange in color. The flesh of the pumpkin is soft and delicately sweet and it is very versatile as it can be used in sweet and savory preparations.

Boosts Vision and Eye Health: Pumpkins have a very high vitamin A content and just half a cup of freshly cut pumpkin cubes will meet a persons recommended daily intake of vitamin A. Vitamin A is closely connected with eye health and vision and a healthy intake of vitamin A will help you see better especially in dim light. Pumpkins also contain beta-carotene as well as vitamin C and vitamin E which are antioxidants and all of these nutrients help to prevent degenerative damage to the eyes.

Retinitis Pigmentosa is an inherited eye disease which causes progressive rod degeneration in the retina and this leads to severe vision impairment and even blindness. Currently, there is no cure for this disease and so treatment options focus on slowing down the decline rate of retinal function. Researchers at Havard recently found that consuming foods rich in vitamin A on a regular basis slows down the decline of retinal function in people who have retinitis pigmentosa.

Promotes Relaxation and Induce Sleep: Tryptophan is an essential amino acid, which cannot be synthesized by the human body and so we have to obtain it through our diet. Tryptophan is required for the production of melatonin and serotonin in our bodies  melatonin plays a vital role in our sleep patterns while serotonin is responsible for the regulation of moods which is why it is often called the feel-good neurotransmitter or the happy hormone.

Pumpkin seeds are rich in tryptophan and so including roasted pumpkin seeds in your dinner would help you relax and unwind after a long day and pave the way for a good nights sleep. Just 10 grams of pumpkin seeds contain almost 60 mg so you can use pumpkin seed powder instead of a glass of warm milk to help you get better sleep.

Prevents Cancer: A diet that contains plenty of beta-carotene rich foods can help to reduce the risk of prostate cancer, according to a study conducted by the Department of Nutrition at the Havard School of Public Health. Other research suggests that it is the carotenoids and high zinc content in pumpkins and pumpkin seeds that offer protection from prostate cancer as they prevent the enlargement of the prostate. Beta carotene has also been shown to have a positive impact on the development of colon and lung cancer. Vitamins A and C are potent antioxidants that shield our cells from the free radicals that cause cancer.

Pumpkin seeds contain plant sterols that can fight off breast cancer and certain types of genital cancers. According to the National Institutes of Health (NIH), food sources of beta-carotene seem to have a better effect than a supplement and so it would be beneficial to include foods rich in beta-carotene in your diet rather than simply popping a supplement. Since pumpkins are rich in beta-carotene and other cancer-protective antioxidants, it would be wise to include them in your diet plan. Pumpkin seed oil may also be play a role in preventing prostate problems as preliminary research on male rats showed that pumpkin seed oil blocked unhealthy prostate growth.

Promotes Male Sexual Health: Zinc deficiency has been listed as one of the main causes of low testosterone levels in men. Scientists at the Wayne State University in Michigan studied the relationship between zinc deficiency and testosterone levels. The participants were from a wide age range from 20 to 80 years of age and when their dietary zinc intake was restricted, their testosterone levels went down within a matter of months. Pumpkins are rich in zinc as well as minerals such as calcium, potassium, phosphorous and niacin that promote a healthy sex drive. Have a tall glass of pumpkin juice every morning to boost your sex drive.

Support Heart Health: Pumpkins contain modest quantities of fiber, vitamin C and potassium, all of which are important for good heart health. In a study that examined the relationship between vitamin C intake and the risk of coronary heart disease (CHD) in women, it was observed that women who had vitamin C supplements on a regular basis were at a significantly lower risk of CHD as compared to the women who did not have the supplements.

Similarly, there have been several studies that have repeatedly shown that an increase in a persons fiber intake will drastically reduce their risk of heart problems as well as stroke. It is common knowledge that people with hypertension (high blood pressure) should reduce their intake of sodium, but most are unaware that increasing potassium intake is almost equally important.

Low potassium levels can cause abnormal heart rhythms, especially if the individual already suffers from heart disease. Pumpkin seeds may also provide heart health benefits and lower blood pressure. In a study done on atherogenic rats, the inclusion of pumpkin seeds in their diet lowered their levels of LDL (bad) cholesterol while increasing their levels of HDL (good) cholesterol. These benefits are likely due to the presence of certain natural plant-based chemicals called phytosterols.

Controls diabetes: In a test conducted on rats, it was observed that rats that were given certain carbohydrate molecules in pumpkins called polysaccharides had reduced blood glucose and lipids levels. Based on these results and other findings, researchers concluded that there is a high likelihood that pumpkins can have a positive effect on diabetes. In a similar test, researchers found that pumpkin seed powder had a positive effect in preventing diabetic complications in rats that had diabetes. Currently, all research indicates that including pumpkins in your regular diet could help to keep your diabetes under control.

Boosts Immunity Levels: Pumpkins contain several immunity-boosting nutrients, including vitamin A, vitamin C and beta-carotene. Including pumpkins in your regular diet can help to bolster your immune system so that your body can easily fight off common viral infections such as the flu. The high vitamin C content in pumpkins may even help to treat the common cold and so a bowl of hot pumpkin soup may be just the cure you need to get rid of that pesky cold! Pumpkin seed oil can also help to fight off bacterial and fungal infections.

Manages Weight: Pumpkins are high in nutrition and low in calories, which make them the perfect food for people who are on a weight loss diet plan. 100 grams of pumpkin contains just 26 calories and dieticians often suggest including pumpkins in a diet plan to reduce cholesterol levels as well as weight since it does not contain any saturated fats or cholesterol.

Since pumpkins contain fiber, they keep you feeling full for longer periods, this in turn, reduces your risk of snacking and binge eating. Pumpkins also contain plenty of water which keeps you hydrated. Instead of trying to cut down on your portion size, you can simply add a large amount of pumpkin to the meals you prepare as this would allow you to eat your regular quantity of food without the burden of the extra calories.

Pumpkins can provide a variety of skin health benefits  whether you decide to include them in your diet or your skincare regimen. The beta carotene in pumpkin offers protection from the suns UV rays while the vitamin A in pumpkins helps to prevent wrinkles. Pumpkins also contain vitamin C which reduces skin blemishes to give you smooth and clear skin. Here are a few pumpkin skincare tips:

Pumpkin Face Scrub: Clean a pumpkin, rinse out the seeds and then roast them lightly over a low flame. Put about a tablespoon of these seeds into a mortar and pestle and grind them to get a fine powder. Now, add a small piece of pumpkin  about 2 X 2 inches and mash it along with a teaspoon of honey so that you have a grainy liquid. Massage your face with this liquid and then allow it to dry completely, before rinsing it off with warm water. You can make a larger quantity of this face scrub and refrigerate it so that you can use it on a daily basis without having to make a new batch each time.

Pumpkin Face Pack: Puree a small piece of pumpkin along with a piece of cucumber and a few mint (Pudina) leaves. Pour this liquid into a bowl and add fullers earth to it so that it forms a thin paste. Apply this paste generously to your face and neck and once it dries completely you can rinse your face with lukewarm water. This facial pack is especially effective in summer as it helps to reduce skin tanning and get rid of excess oil.

Pumpkin Peel-Off Mask for Blackheads: Puree a small piece of pumpkin until there are no lumps left. Pour 3 tablespoons of this liquid into a small bowl and then add 1 tablespoon of unflavoured gelatine to it. Mix it thoroughly until it thickens and then heats it in a microwave for 15 seconds. Mix it once again and apply it to your face as quickly as possible as the mask will harden pretty quickly. Once the mask has dried completely, peel it off slowly to get rid of blackheads and whiteheads.

The nutritional values of "Pumpkin" per 100 grams are:
Data source: USDA Nutrient Database, R25
*Percent Daily Values (%DV) are based on a 2,000 calorie reference diet. Your daily values may be higher or lower based on your individual needs.
To See Full Nutrition Facts & Analysis for Pumpkin - click here

Latest Publications and Research on Health Benefits of Pumpkin

Want Glowing Skin and Healthy Hair? Use Carrots, Pumpkin Seeds and Pineapple!
Is the chilly weather robbing your skin and hair of their glow and shine? Well, stop worrying and look in your kitchen for carrots, pumpkin seeds and pineapple to enhance your appearance.
READ MORE 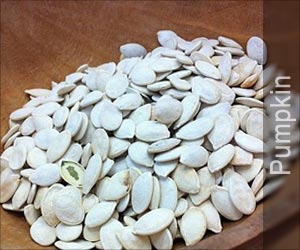