Flavonoids are polyphenolic plant pigments widely present in vegetables, fruits, herbs and spices. Lesser known than vitamin C and E, these are a group of antioxidants that are lately receiving a lot of attention for their health benefits.

The bioavailability of flavonoids is relatively low for two reasons. One, their absorption from the digestive tract is usually limited. Secondly, these are very quickly eliminated from the body. 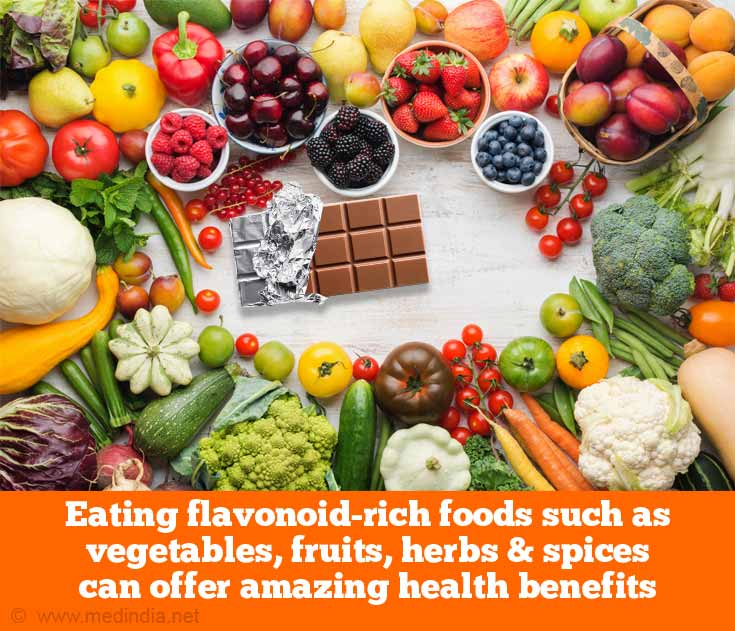 The most bioavailable group of flavonoids is the isoflavones that contain the soy flavonoid called genistein.

Flavonoids are especially known for their antioxidant activities, which play a significant role in cardiovascular health and in the prevention of cancer. Other than fighting free radicals, they are also known for their antihistamine, antimicrobial, memory enhancing and even mood-boosting properties.

Flavonoids May have Potential for Killing Cancer Cells - A study from the University of Illinois showed that celery, artichokes, and herbs, especially Mexican oregano, contain flavonoids that killed human pancreatic cancer cells under lab conditions. The flavonoids act by inhibiting an important enzyme. However, the research team said that the trick seemed to be in using the flavonoids as a pre-treatment instead of using them and the chemotherapeutic drug simultaneously, since flavonoids can act as antioxidants and taking antioxidant supplements on the same day as chemotherapeutic drugs may negate the effect of those drugs.

Flavonoids have Cardiovascular Benefits - A review study published in the American Journal of Clinical Nutrition confirmed earlier researches on benefits of chocolate flavonoids on cardiovascular health. The researchers found that chocolate or cocoa reduced blood pressure and had significant effects on LDL and HDL cholesterol.

Flavonoids are Beneficial in Controlling Diabetes - The study also found that insulin resistance was improved by chocolate or cocoa due to significant reductions in serum insulin.

Isoflavones may Ease Menopausal Symptoms - Soybean isoflavones have been found to reduce hot flash frequency in perimenopausal and postmenopausal women, according to a study by researchers at National Institute of Health and Nutrition, Tokyo, Japan.

Proanthocyanidins Reduce the Destruction of Collagen - Grape seed proanthocyanidin extract (GSPE) acting as an antioxidant has a therapeutic effect on collagen-induced arthritis, say the researchers at The Rheumatism Research Center, The Catholic University of Korea, Seoul. They experimented on lab animals and found that GSPE significantly reduced hydrogen peroxide production that destroyed collagen. The researchers also suggested that GSPE may be beneficial for the treatment of chronic autoimmune inflammation, which is commonly observed in rheumatoid arthritis.

Flavonoids Improve Cognition in Older Adults - The flavonoid antioxidants, especially anthocyanidins, have shown to improve cognition in experimental studies. Greater intakes of blueberries and strawberries were associated with slower rates of cognitive decline, according to Harvard researchers. They also pointed out that berry intake appears to delay cognitive aging by up to 2.5 years. Incidentally, flavonoids also reduce the slowing of body movements, fatigue, irritability, and depression, all associated with free radical damage. 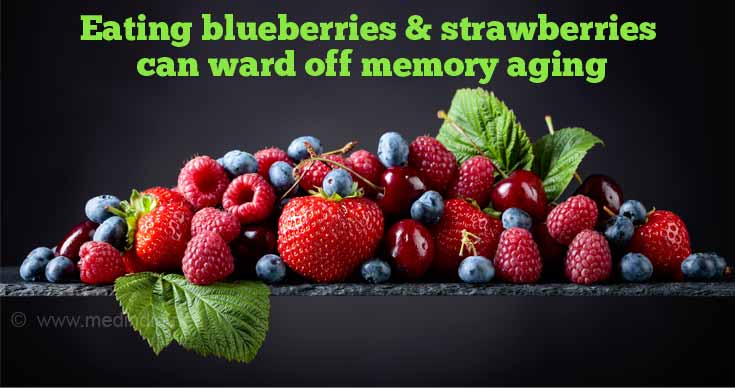 All fruits and vegetables contain one or the other flavonoids to a certain degree.

Another classification of flavonoid foods is based on their flavonoid content.

Interestingly, there is no evidence of side effects associated with dietary intake of flavonoids. The reason could be attributed to their low bioavailability, that is, poor absorption and quick elimination.

However, flavonoids in the supplement form do have side effects, and sometimes severe ones. For example, they can cause nausea, headache, or tingling of the extremities in some people when taken in doses of 1000mg per day. Similarly, a study showed that tea extracts supplement can cause liver toxicity in some cancer patients.

It is best to avoid flavonoid supplements during

Latest Publications and Research on Health Benefits of Flavonoids

Antioxidant Food Chart Know the antioxidant value in foods and plan your daily menu with antioxidant rich foods to stay young and healthy. Antioxidants protect you from free radicals that trigger cell damage and diseases.

Antioxidant Rich Spices Antioxidant activities of spices are mainly attributed to the bioactive compounds present in them. The highly reactive phytochemicals are responsible for their protective effects.

Health Benefits of Soybean Soyabean is the richest plant source of protein containing 43 percent protein. Soy protein is also of the highest quality amongst all legumes.

Lifestyle Paths to Heart Disease Heart disease can be of many types depending upon whether they involve the heart muscles or artery walls or heart beats. Bad lifestyle choices contribute to heart disease.

Health Benefits of Arugula Arugula provides an array of health benefits as it is loaded with essential vitamins and minerals, antioxidants and health-enhancing compounds.

Top 8 Health Benefits of Leeks Discover the amazing health benefits of this ''under-valued'' vegetable called leek. Know the different nutrients present in it and how they are beneficial for your body.
Sign up for Wellness Consult a Doctor Sign up for Selfcare
Advertisement
Health Topics A - Z
A B C D E F G H I J K L M N O P Q R S T U V W X Y Z