What is Graviola Tree?

Graviola (Annona muricata) is a rainforest tree, classified under the pineapple family Annonaceae. Also known as soursop or raintree or Brazilian paw paw, it is found in the belt extending from Central America to South America, including parts of Brazil.

Advertisement
This small evergreen tree with large glossy dark green leaves grows to a height of 5 to 6 meters. The edible fruit is heart-shaped, yellow green in color and white inside.

Graviola has gained much importance because of acetogenins, a group of potential anti-cancer agents, found in this plant. 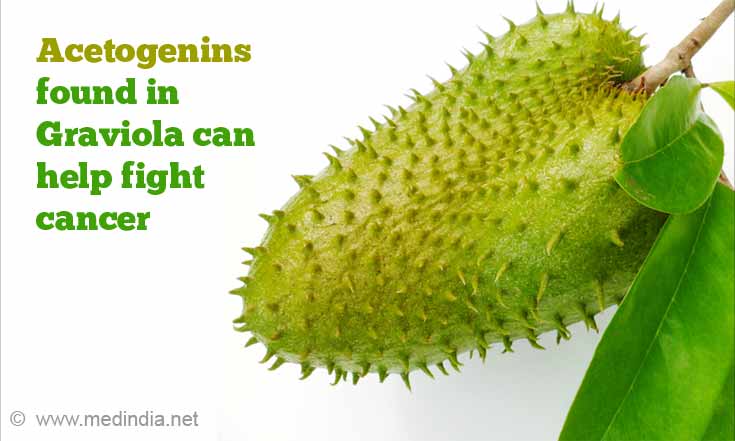 1. Leaves are used for headaches and insomnia. The leaves also contain antioxidants known to fight inflammation.

2. Cooked leaves, applied topically, fight rheumatism and abscesses. In certain regions of Brazil, the oil of the leaves and unripe fruit is mixed with olive oil and used externally for neuralgia, rheumatism, and arthritis pain.

3. The fruit and fruit juice are used- 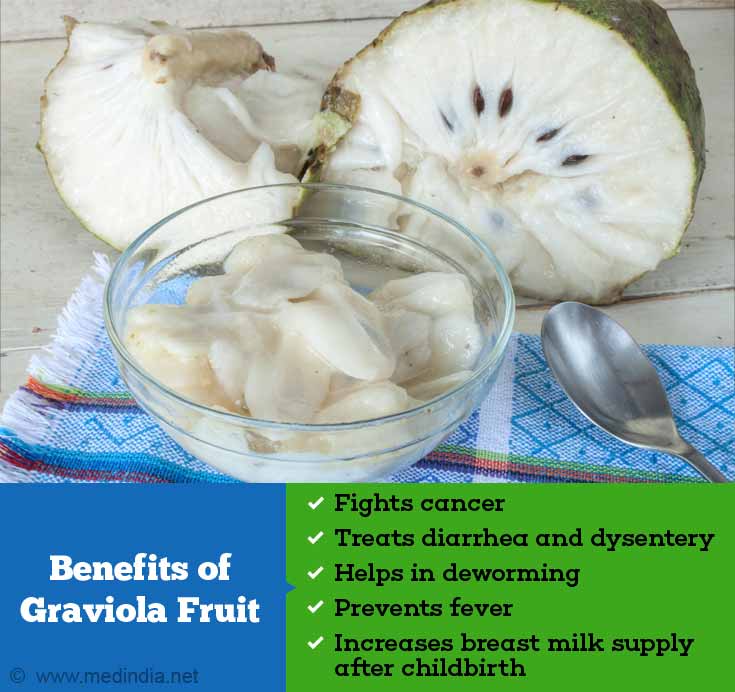 4. The seeds are crushed and used against internal and external parasites, head lice, and worms. However, it is important to note that seeds and roots contain certain toxins that could cause atypical Parkinsons disease, so this herbal remedy is best avoided.

5. Tea made from Graviola leaves has long been used in the Amazon region to treat liver and stomach disorders.

6. A tea made from the bark, leaves, and roots are used-

Graviola is best known for its anti-cancer properties. Researchers are very enthusiastic about Graviola being an alternative medicine to be used as supportive therapy for cancers, such as breast cancer, prostate cancer, liver cancer, lung cancer, pancreatic cancer, and lymphoma. It is one of the most studied properties of the tree and so far it has shown positive results. However, always consult your doctor before using Graviola for any therapy, as most studies regarding the health benefits of Graviola have been conducted only on laboratory animals and have not been confirmed in humans.

Pancreatic cancer: An increased metabolic activity and glucose concentration in the tumor cell has been linked to aggressive pancreatic cancer. One study published in the journal Cancer Letters showed that Graviola extract containing acetogenins acted in a way to decrease ATP production, thus, leading to death of cancer cells. Incidentally, the researchers found that it does not affect the healthy cells.

Lung cancer- Adriamycin is sometimes used as chemotherapy drugs for cancers including lung cancer and blood cancers. A Japanese study done on lab animals found that annonacin (acetogenin) could inhibit the growth of cancer cells in the lungs as much as Adriamycin, if not better. However, R. Webster Kehr, at Independent Cancer Research Foundation, warns that Graviola can be especially dangerous for lung cancer patients and brain cancer patients where a clustered amount of cancer dead cells (lysing) can be very dangerous.

Diabetes- Graviola has been found to be beneficial in cases of diabetes. A Nigerian study revealed that leaf extract of Graviola significantly reduced blood glucose concentration in experimental animals, possibly by enhancing the effects of insulin and adrenalin. No human trials have yet been done, therefore its use for this purpose cannot be recommended.

High blood pressure- Studies have shown Graviola to be hypotensive (reduces blood pressure), vasodilator (widens the blood vessels) and cardio depressant (decreases heart rate and contractility). If you are using drugs for your high blood pressure, check with your doctor before taking Graviola as your medication may need adjusting.

Side Effects of Graviola

Although seeds and roots of graviola contain acetogenins that help in cancer therapy, they are best avoided because other chemicals present in these parts have shown neurotoxic effects similar that of atypical Parkinsons disease.

There is no evidence that taking Graviola in pregnancy and lactation is safe. Consult your doctor regarding the use of this alternative medicine.

The nutritional values of "Soursop, raw" per 100 grams are:
Data source: USDA Nutrient Database, R25
*Percent Daily Values (%DV) are based on a 2,000 calorie reference diet. Your daily values may be higher or lower based on your individual needs.
To See Full Nutrition Facts & Analysis for Soursop, raw - click here

this is interesting. if you are from the west, i recommend markizza soursop juice on amazon. it tastes just perfect.

Alternative Medicine - A Placebo or a Reality?
Some alternative healing practices though widely accepted throughout the world, are still under suspicion for their reliability and effectiveness.

Quiz on Breast Cancer
Breast cancer is one of the leading causes of cancer deaths among women. It is often said that a woman who breast-feeds is at a lower risk of developing cancer compared to another who does not .Are these mere old wives tales or is there some truth ...

Antioxidant Food Chart
Know the antioxidant value in foods and plan your daily menu with antioxidant rich foods to stay young and healthy. Antioxidants protect you from free radicals that trigger cell damage and diseases.

Fruits to Help Lower Blood Pressure
Top reasons why you should eat fruits to lower blood pressure and reduce the risk of heart disease. Antioxidants in fruits keep your blood pressure under control.