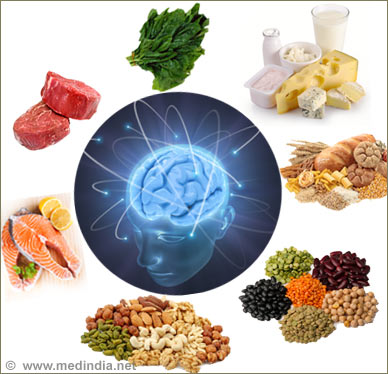 People are more alert when their brains are producing the neurotransmitters dopamine and norepinephrine, while serotonin production in the brain has been associated with a more calming effect (and even drowsiness in some people). A stable brain serotonin level is associated with positive mood. Women have a greater sensitivity to changes in the brain serotonin levels. Mood swings during the menstrual cycle and menopause are majorly due to hormonal changes that influence the production of serotonin.

The foods that increase the production of serotonin in the brain are the ones high in carbohydrates. This explains the drowsiness that sets in the afternoon after eating a large meal of pasta, rice, sweets, breads etc. Carbohydrates affect brain serotonin because they increase the levels of tryptophan in the brain. Tryptophan is an amino-acid and is the precursor of serotonin.

Dopamine and norepinephrine, produce a feeling of alertness.

This may be explained in context to two possible mechanisms.

Chocolate consumption stimulates the release of serotonin and endorphin into the body, which combine to produce a relaxed or euphoric feeling. This may explain why some people crave chocolate when they're feeling depressed. Another group of neurotransmitters that can influence mood and appetite are the endorphins. These produce a positive mood state, decreased pain sensitivity and reduced stress. Endorphins are released during starvation, and during exercise.

Deficiencies of certain nutrients in food can drastically affect the mood.

Folate: A recent study published in the journal Nutrition Reviews found that as many as 38 percent of adults with depressive disorders were deficient in folate. Researchers wrote that the deficiency may impair the body''s ability to produce neurotransmitters that act as mood stabilizers.

Magnesium: According to a 2006 article in the journal Medical Hypotheses patients recovered from major depression within 7 days of taking a magnesium supplement with each meal. Researchers have found that inadequate levels of magnesium in the body can result in damage to the brain's neurons, which may cause depression.

Latest Publications and Research on Food and Mood

Vegetarian Diet Improves Mood
A study found that mood and the ability to deal with stress is better in people on a vegetarian diet.

Food Cravings
Cravings often signify some need-whether nutritional or mental. Read on to find out if it's really your sweet tooth or something else.

Effect of Food on Stress-Related Mood and Eating Behavior
A study found that the type of meal is not important when considering its influence on changes in mood and eating behavior.

Colors and Moods - Color Psychology, Color Therapy or Chromotherapy
Study of the psychology of color, technically termed as chromology delves into the influence of colors on the relationship between body and mind.

Know Chocolates Better - History - Types - Health Benefits - Reference
Chocolates are healthy. Here are the most important things you have to know about chocolates - its history, types, health benefits of eating different kinds of chocolates and why people love chocolates. It's all here.

Top Ten Foods to Boost Your Mood
Do you feel gloomy and depressed for no reason? What if you can beat the blues by just eating the right kind of food! Read on to know more about mood boosting food.

Endorphins
Endorphins are natural painkillers produced in response to stimuli, like laughter, pain, stress, sex, starvation, and exercise. They are produced in the brain and are called the pleasure molecules.
Sign up for Wellness Consult a Doctor Sign up for Selfcare
Advertisement
Health Topics A - Z
A B C D E F G H I J K L M N O P Q R S T U V W X Y Z