Flowers in Relation to Our Health

Get happy and healthy with the flower power. Drink the juice of pomegranate flowers to manage your diabetes. Reach for that bunch of gerbera when you are down. Declare your first love with lilacs.

Flowers are associated with health and wellness from all perspectives  be it Western medicine or Eastern medicine, homeopathy or naturopathy.

As early as 1000A.D, Avicenna, a disciple of Aristotle, used color and flowers to treat diseases. He found that the color red moved the blood and the color blue or white cooled it. He also found that yellow reduced pain and inflammation. He started prescribing red flowers extract to cure blood disorders and yellow flowers to cure liver disorders.

The use of flowers in Ayurveda is even older. This 5000-year-old Indian traditional medicine uses medicinal flowers and their extracts to treat diseases ranging from hair loss to stomach disorders to even cancer. For example, the beautiful yellow flowers of Cassia fistula (Amaltas) not only give an aesthetic value to the area they are grown in, they are also used to treat stomach infection in Ayurvedic medicine. The flowers also exhibit anti-bacterial activity. Following are a few other flowers that are therapeutic.

Flowers having medicinal properties are used not only in Ayurveda but in other forms of medicines as well. The dried flowers and buds of the Japanese pagoda tree (Sophora japonica)  a small tree or shrub of the pea family  is a useful medicinal herb in China, Japan and Korea. They are used to treat bleeding hemorrhoids and hematemesis (the vomiting of blood). A study published in the journal Chinese Medicine found that flowers of Sophora japonica could also reduce cerebral infarction partly as a result of its anti-oxidative and anti-inflammatory properties. A cerebral infarction is the ischemic kind of stroke due to a disturbance in the blood vessels supplying blood to the brain.

The medicinal value of flowers is not just limited to taking the flowers as pills or in the form of juice. Any work associated with flowers is also said to be therapeutic. Oshibana in Japanese means pressed plant and working with pressed flowers to provide a sense of well-being by dissolving negative energy blocks (qi or chi) is called the Oshibana therapy. Apart from treating depression, this therapy has shown to have major health benefits including improving ulcers, migraine, stomach disorders, heart disease and even cancer. According to Suzanne Faith, a psychiatric nurse practicing Oshibana therapy, Flowers combine the power of color and form. When flowers are placed in balanced floral patterns designed to strengthen body, mind and spirit, they can become powerful symbols to aide in healing when others have failed.

Flowers are Fast Losing Their Fragrance Due to Air Pollution
A woman with a sweet-smelling bouquet of blooms flowers may not work any more, for flowers are fast losing their scent due to air pollution.
READ MORE

Beat Stress by Inhaling the Scent of Fresh Flowers
Feeling stressed? Then try savoring the scent of lemon, mango, lavender, or other fragrant plants.
READ MORE

Recuperating Britney Turns to Flower Therapy
Britney Spears has turned to gardening to maintain her physical and emotional balance, as per reports.
READ MORE

Health Benefits of Hibiscus
Find out the interesting facts of Hibiscus and how it can be used in tea and juices to boost your intake of essential nutrients and improve your health.
READ MORE 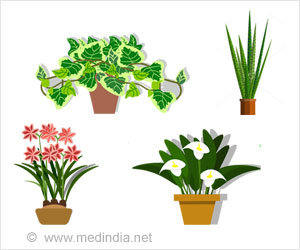 Flowers And What They Mean To Us - Related News