In a soon to be published study done by dermatologists, doctors point out that there is a widespread violation of rules with medical prescriptions increasing the abuse of medicines and fairness creams.

Doctors are particularly worried about the usage of a compelling chemical Clobetasol or a bleaching compound hydroquinone, both having a legitimate use in dermatology but not in lightening skin color. The chemical clobetasol is used to treat skin inflammation, but one of its side effects is skin lightening. Users and patients abuse creams prescribed for inflammation as fairness creams and become victims of hyper pigmentation-darkening of skin. Few fairness creams contain clobetasol propionate which comes with a warning to be used under a doctors supervision only.

What most of the advertisements claim, are just manipulations. All the creams that get sold like hot cakes from the store shelves are not all damaging or with no effect. They add to the texture of your skin, improve and add glow which is mistaken for fairness by the common man. With the internet being a boon these days' people have the power to check prescription free remedies and get lured by the high claiming skin lightening creams. Besides corticosteroids, the fairness creams also contain mercury, a poison that can damage the nervous system. 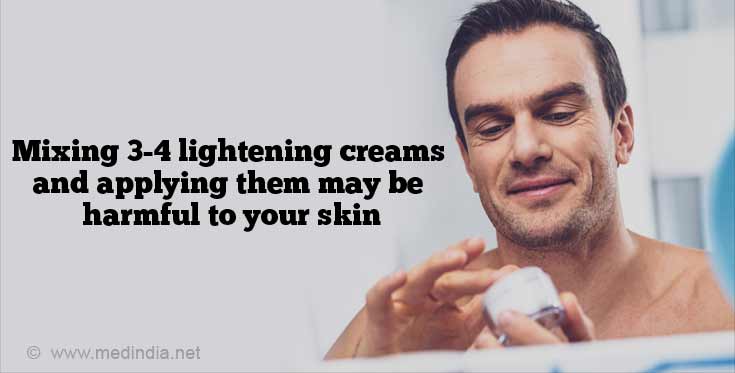 Many have bid adieu to the age-old fairness creams knowing the high quantity of mercury present in the cream causing more darkening and in some cases, even skin cancer too, trying out the newer brands with better contents. There are many loyal users who continue applying it hoping to look snow white for a meager price. Asian Men have always used the fairness cream borrowed from their sisters, mother or wife but have been secretive about it; today they are not coy about it. Too bad, some men are known to mix 3-4 lightening creams and apply for better results not realizing how harmful it could be.

About three to four percent of these chemicals according to medical experts are the permissible limit as far as side effects are concerned, but these ratios are not mentioned on the label to declare them safe. You do not invest time in checking these details either. Hence the vicious cycle of chemical abuse to your skin continues.

MD
1 year experience
Venkateshwara med city , U turn before Redhills toll gate and hospital is on the left

Use eye rid serum for glowing skin, any kind will do. and regular bronzer

Can You Recommend Methods To whiten The skin?? Thanks.

Hydroquinone Hydroquinone is a local cream prescribed for dark or hyper-pigmented skin marks such as freckles (small flat brown marks on the face and sun exposed areas), melasma (brown patches on skin), age spots, and dark spots due to acne, ...

Alternative Medicine - Fairer Complexion Here are some tips for very good to brighten the skin and add the glow to the complexion. It must be done as a daily routine in the specified time.