Children learn by observing and imitating their environment. In todays times, movies and media play a huge role in shaping a childs character and therefore the content they watch could affect the way in which they perceive the world around them.

Romantic movies can affect a both positively and negatively and therefore, creating a space for them to be able to openly discuss whatever they learn would be a great way to guide them efficiently through their formative years.

The Social Learning Theory proposed by Dr. Albert Bandura, a pioneer in Psychology, more specifically Social Psychology, emphasizes on the fact that a lot of our learning takes place by observing, imitating and modeling the actions or behavior, emotional reactions and attitudes of others in our environment (role models who we wish to emulate). Simply put, Dr. Bandura says that we all learn from our environment through observation, be it a behavior or attitude that is good or bad.

In todays times, media and movies have a large role to play in the molding of a child during his/her formative years. The current generation has easy access to any and all sorts of content online and on television as well. What we will be looking at specifically today in this article is the effect of romantic films on a childs mental health.

Romantic films are ones that often explore the themes of love (love at first sight, teenage romances, tragic love, happily-ever-afters etc.), sensuality, passion, sex, sexuality, the emotional involvement of the two lead characters and the journey that their love takes either through courtship or marriage. These films portray the several different hardships that the couple faces, caste issues, economic status differences, colour or race, finances and so on; the plot mainly focuses on whether they are able to overcome these obstacles and continue to be with each other or part ways.

Research indicates that movies and media influence children and young adults in several ways and it impacts their perception about themselves and their environment. Most often films act as a fabric that gives the world they live in, a certain meaning. 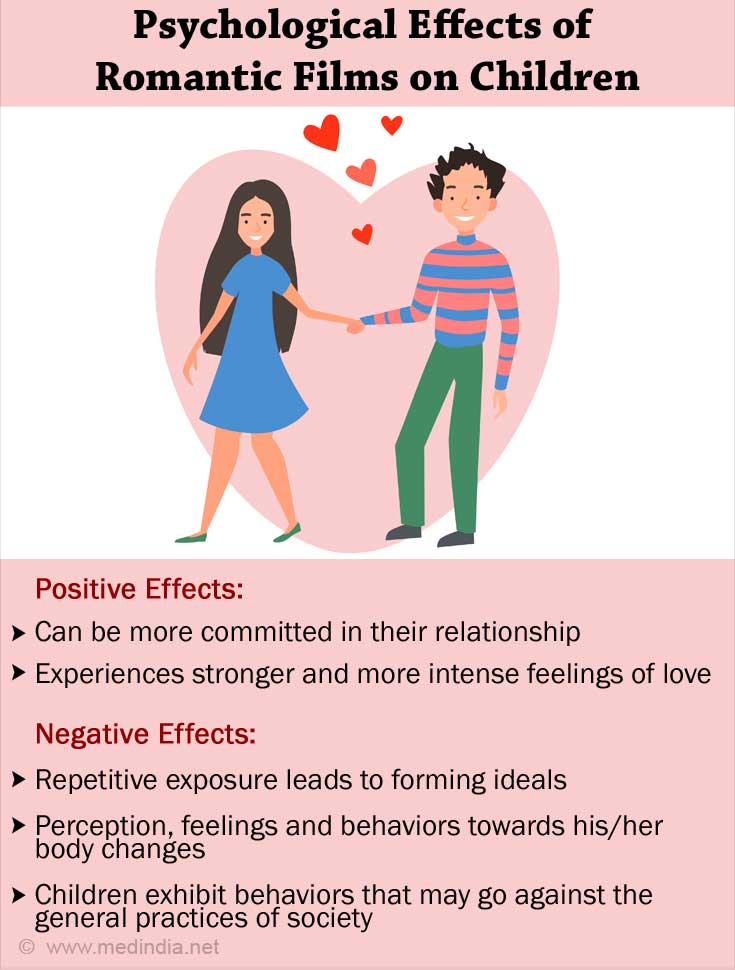 1. Idealization - Studies show that repetitive exposure to romantic content leads to forming ideals in the minds of children and young adults as far as love and relationships are concerned. The concepts of love at first sight, first date, love conquers all, childhood sweethearts are some of the most common themes found in romantic films.

Studies indicate that children and young adults who are exposed to romantic films have high expectations of how things are going to be, and look forward to more luxurious ways for their first date or even the other themes mentioned earlier, as they have been influenced by what they watch on screen - a candlelit dinner at a fancy restaurant, the boy picks the girl up in a car and so on and so forth. This often leads to frustration and disappointment when events dont take the desired turn.

Children and young adults also tend to idealize the whole idea of romance, as these films have their own typical ways of how the romance unfolds, the period of courtship finally leading to marriage and the concept of happily ever after.

Seldom are children and young adults exposed through a romantic film, to the life that lays ahead of marriage, the responsibilities, the effort that goes on into keeping the marriage alive, the adjustments made by the couple when they start building their home, the various roles they play and how they support each other through tough times and be by each other's side through happy times.

The effect of idealization could lead to rocky relationships in the future, as the expectations are that of the ones they witnessed on screen.

2. Body Image - Ones own perception, feelings and behaviors towards his/her body. Children and young adults alike, are influenced by what media and films portray as an ideal way to look.

Research indicates that even infants have a general sense about their own body, and as children develop cognitively, physically and socially, their body image also develops alongside. Further, findings suggest that children between the ages 5 - 6 years, when asked to choose an ideal body size, chose one that is thinner than their currently perceived body size.

Films emphasize on girls or women looking young, beautiful and thin and boys having toned bodies, in order to make an ideal or desirable partner. Most often characters who are overweight are shown as being unhappy and not too intelligent.

Children and young adults are faced with immense pressure to look a certain way to be accepted by their peers, causing them a number of mental health issues like stress, anxiety, depression and also eating disorders like anorexia and bulimia.

3. Mixed Messages - Children who are exposed to romantic movies very often exhibit behaviors that may go against the practices of society in general.

Today, especially in a country like ours, where a relationship between a boy and a girl in school or at a very young age, in the romantic sense, is still taboo, reel life creates a sense of confusion, they arent sure if it is okay or not.

In the more conservative households where these topics arent discussed, it leads to frustration as children and young adults experience physical and hormonal changes, do get attracted to the opposite sex but dont know if it is okay to feel what they are experiencing and have nobody to discuss it with.

In a famous movie series, the lead man is extremely possessive of his woman and is jealous of her interaction with her best friend and these are themes that are portrayed as being attractive, whereas in real life the trait of possessiveness or jealousy can have devastating effects on a relationship.

Mixed messages like this can lead to confusion in the minds of children and young adults.

4. Some Positives Too - Romantic movies also affect children and young adults in a positive way as well. Findings suggest that individuals who endorsed romantic ideals stayed more committed in their relationship and also experienced stronger and more intense feelings of love in comparison to those who did not endorse romantic ideals.

All this said, children cant be kept away from the media or its contents forever. A good thing to do would be to create a healthy environment for them to be able to discuss their thoughts and feelings with you as parents or significant adults. 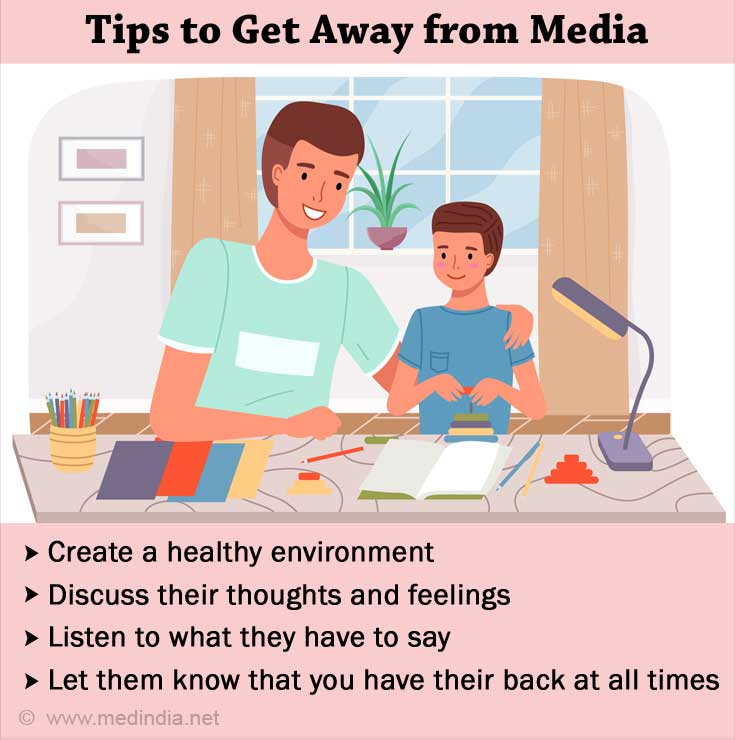 The KEY to doing this - listen to what they have to say, show them that you are interested in knowing what life reveals to them, let them know that you have their back at all times and that in you they can find their airplane to explore the world till they feel confident enough to fly themselves!

HIRE THE CERTIFIED AND GUARANTEED CRYPTO RECOVERY AND PHONE SPYING EXPERT AT REMOTESPYTECH Finding out that your husband or wife has been unfaithful isnât just a time of profound heartbreak and shock, itâs also a time of intense confusion . At certain points desperate measures are our only resort and we take them, finding a trustworthy infiltrator can be a lifeline and I sure used one to save my relationship, business and sanity. I was having real life problems when my friend recommended Zion to me. I contacted him because my business partner was shaking me, stealing money from the business. Also my spouse was always up at odd hours clearly this is a sign that my spouse is cheating, so the hacker cloned/hacked into their devices and granted me total access to their devices without their knowledge. I was overwhelmed that I could see my business partner hidden finances that were off records and read their old and new text messages, see new and deleted pictures, emails, call logs, Facebook, messenger, WhatsApp, Snapchat, GPS location in real time among other things off my spouse phone. If you require the services of a private investigator [EC council certified personnel], you can speak to Zion at Remotespytech(@) Gmail, com . You will be glad you did. For the purpose getting him comfortable working with you, it is advisable you make reference to this post as it would save you a lot of back and forth while ensuring you are not some kid playing around. I do hope this helps. Email: REMOTESPYTECH (@) GMAILCOM WhatsApp: 1 (352) 870-0844 They can help you recover lost or stolen bitcoins and funds in one swipe. He assisted my friend recover his stolen $155,000 savings from a faux forex broker. He can help you repair your bad credit, secure a good loan for you and upgrade your credit scores. Send your complaint to this great team now!!! Real deal Excellent Service

Impact of Media Use Among Youth, Kids
Researchers in one study have identified a link between media use and depression in college students.

PG-13 Rated Films Adversely Expose Kids to Violence
Researchers have found that PG-13 rated films are not safe for kids for they depict violence, which has a negative effect on them.

Good Guys are Shown to be More Violent Than Bad Guys in the Movies: Study
Guys portrayed as good guys in the movie are shown to have a more violent streak than the bad guy, finds a new study.
Sign up for Wellness Consult a Doctor Sign up for Selfcare
Advertisement
Health Topics A - Z
A B C D E F G H I J K L M N O P Q R S T U V W X Y Z

Sanatogen Drug - Food Interactions Daily Calorie Requirements Blood Donation - Recipients A-Z Drug Brands in India The Essence of Yoga Blood Pressure Calculator Noscaphene (Noscapine) Drug Interaction Checker Pregnancy Confirmation Calculator
This site uses cookies to deliver our services.By using our site, you acknowledge that you have read and understand our Cookie Policy, Privacy Policy, and our Terms of Use  Ok, Got it. Close