Green leaves are the food factory and heart of a plant where everything needed by it is synthesized. Green leafy vegetables are comparatively cheap yet bountiful. Their chlorophyll content not only provides the plant with nutrients it requires, but also helps the human body to fight against cancer and neutralize toxins.

Chlorophyll is the most critical substance in plants. It allows them to absorb light from the sun and convert that light into usable energy. It is usually easy to tell when a food has significant amounts of chlorophyll, because chlorophyll provides the green color that is found in grasses, leaves, and many of the vegetables that we eat. All green vegetables like spinach, fenugreek leaves, coriander leaves, asparagus, bell peppers, broccoli, Brussels sprouts, green cabbage, celery, collard greens, green beans, green peas, kale, green olives, parsley, lettuce, turnip greens are concentrated sources of chlorophyll.

Chlorophyll exerts a plethora of health benefits. The most amazing benefit it gives comes from the fact that its molecular structure is almost identical to hemoglobin except for the center atom. In hemoglobin the center-atom is iron, whereas in chlorophyll it is magnesium. This means that when ingested, chlorophyll can actually help to do the job of hemoglobin (blood is approx 75 percent hemoglobin). Chlorophyll helps to rebuild and replenish the red blood cells, boosting energy and increasing wellbeing almost instantly. Eating or drinking chlorophyll helps restore better health and vitality.

In addition to rebuilding and replenishing the red blood cells, it benefits in many other ways. Various studies have demonstrated dietary chlorophyll derivatives prevalent in both fresh and processed foods and dietary supplements to possess significant antioxidant and antimutagenic activities.

Chlorophyll is the single most critical substance in plants that allows them to absorb light from the sun and convert that light into usable energy. While all green plants contain chlorophyll, some vegetables are particularly high in it. Best studied of all the vegetables is spinach, with the vegetable containing about 300 to 600 milligrams chlorophyll per ounce.

Dramatic losses of chlorophyll occur after prolonged cooking. Whenever a vegetable is cooked long enough, there occurs a change in color from bright green to olive-gray as chlorophyll in the vegetable changes to pheophytins. According to research, loss of chlorophyll steadily increases when the boiling time of green vegetables is increased from 5 to 20 minutes.

Overcooking is particularly bad when it comes to chlorophyll, but steaming for a short time helps preserve the chlorophyll content of the foods, and absorption of chlorophyll from foods may actually be increased. Consumption of green vegetables in raw or juiced form is an excellent way to obtain the benefits of chlorophyll.

The nutritional values of "Amaranth leaves, raw" per 100 grams are:
Data source: USDA Nutrient Database, R25
*Percent Daily Values (%DV) are based on a 2,000 calorie reference diet. Your daily values may be higher or lower based on your individual needs.
To See Full Nutrition Facts & Analysis for Amaranth leaves, raw - click here

Go with green for an healthy life.

Yellow, Green Vegetable Consumption Extends Lifespan: Study
High blood levels of the antioxidant alpha-carotene, found in yellow and green vegetables, appear to reduce the risk of dying over a 14-year period, according to a new study.
READ MORE 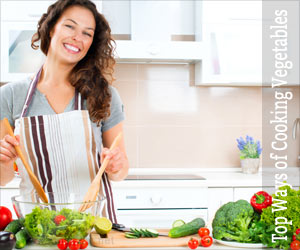