Medindia » Diet and Nutrition » Barley and its Benefits

Barley and its Benefits

Many of us have never eaten barley as an edible grain and know it only as a key ingredient used in making malt beer and grown extensively as food for animals.

Barley is an ancient grain and belongs to the grass family called Gramineae. It was used as an important bread food during the 16th century by the Egyptians, Greek and Chinese.

This grain is rich in starch and sugar and low in fats and protein. It is an excellent source of both soluble and insoluble fibre and selenium. It is also a good source of phosphorous, copper and manganese.

The barley grain is similar in structure to wheat and oats and the appearance usually ranges from black to violet though most commonly the grains resemble maize hues. Barley packs a lot of health benefits  it is a winner when it comes to nutrition along with a pleasant flavor and a chewy consistency. It helps the body to metabolize fats, cholesterol and carbohydrates. 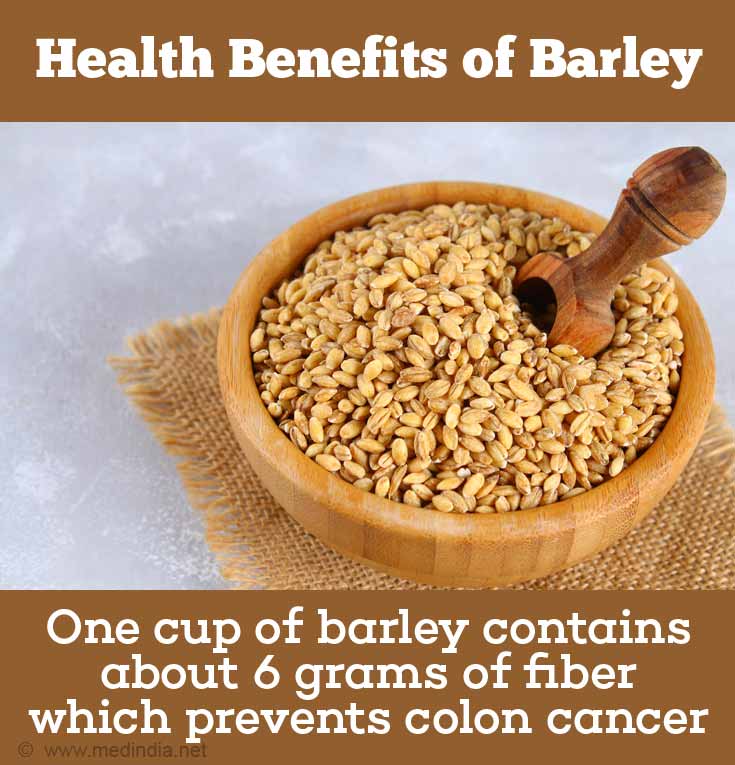 A cup of barley has about 6 grams of fibre of both the soluble and insoluble kinds  the insoluble fibre helps prevents colon cancer and maintains regular bowel movement. The soluble kind lowers blood cholesterol and slows down absorption of sugar and reduces the risk of type 2 diabetes. Barley contains phytochemicals, which help with heart health.

The presence of copper in barley reduces symptoms of rheumatoid arthritis symptoms; it also maintains flexibility in bones and joints.

Barley is a rich source of niacin, which is effective in reducing blood clots and cardiovascular disease.

Barley is good for childhood asthma. As barley is very easy to digest it is given to convalescents. As it is diuretic, it is useful in bringing down simple fevers and controls diarrhea.

The selenium present in barley preserves elasticity of the skin, along with manganese and it gives the body a feeling of well-being.

It is good to have barley for those on weight reduction as barley is low in fat and reduces craving for certain kinds of food, it acts as an appetite suppressant and gives a feeling of fullness.

Barley contains antioxidants, which are important to maintain good health. Specifically, antioxidants work to slow down the rate of oxidative damage by gathering up free radicals that form when body cells use oxygen.

Generally people with gastritis can have barley water as a tonic as it expels harmful toxins from the body. Add a few drops of lime juice and drink it warm for relief from coughs, colds and throat inflammations. It prevents urinary tract infections. 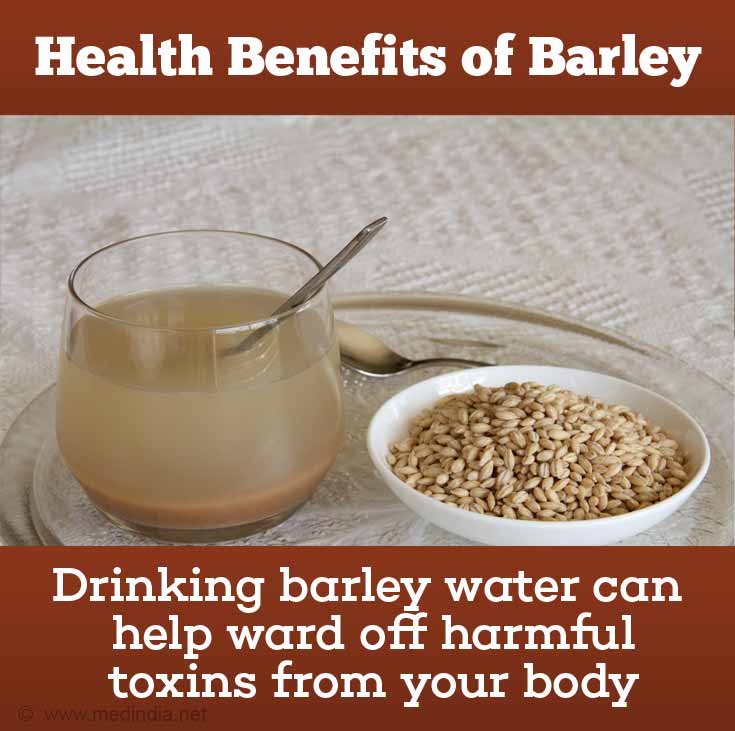 Though barley has plenty of vitamins and nutrients, adding barley to a normal diet can be very beneficial, there are certain medical conditions where it should be avoided  irritable bowel syndrome or celiac disease may get aggravated with consumption of barley.

In some people the lipid lowering ability is increased with a higher intake of barley, but the increase in soluble fibre caused bloating, flatulence, and abdominal discomfort.

In stores you find two types of barley  pearled barley and hulled barley, the health benefits are available in both but pearl barley has been peeled so fewer nutrients are available as compared to the hulled variety. Barley can be added to food in the powdered form also.

The nutritional values of "Barley, hulled" per 100 grams are:
Data source: USDA Nutrient Database, R25
*Percent Daily Values (%DV) are based on a 2,000 calorie reference diet. Your daily values may be higher or lower based on your individual needs.
To See Full Nutrition Facts & Analysis for Barley, hulled - click here
Published on May 24, 2013
Last Updated on Mar 27, 2019

Latest Publications and Research on Barley and its Benefits

Magical Millets for Your Health Millets are far more nutrient dense than wheat and rice. They are inexpensive and tasty too. Nutritionists now advise switching to millets from wheat and rice.