Almonds are one of the most healthy and nutritious nuts. In recent years, almonds have become popular for their health benefits. Experts suggest that eating a handful of almonds a day aids in weight loss and improve brain health. Swapping unhealthy snacks with almonds can reduce hunger and desire to gorge food later in the day. For weight watchers, almonds help reduce their overall calorie intake.

Almonds have been praised as the healthiest nut as it contains monounsaturated fatty acids, dietary fiber, vitamin E, riboflavin, magnesium, calcium, phosphorous, iron, selenium and other essential antioxidants. Almonds are usually eaten raw, however, they can also be added to salads and yogurt. Almonds are also available in other forms such as flour and milk. 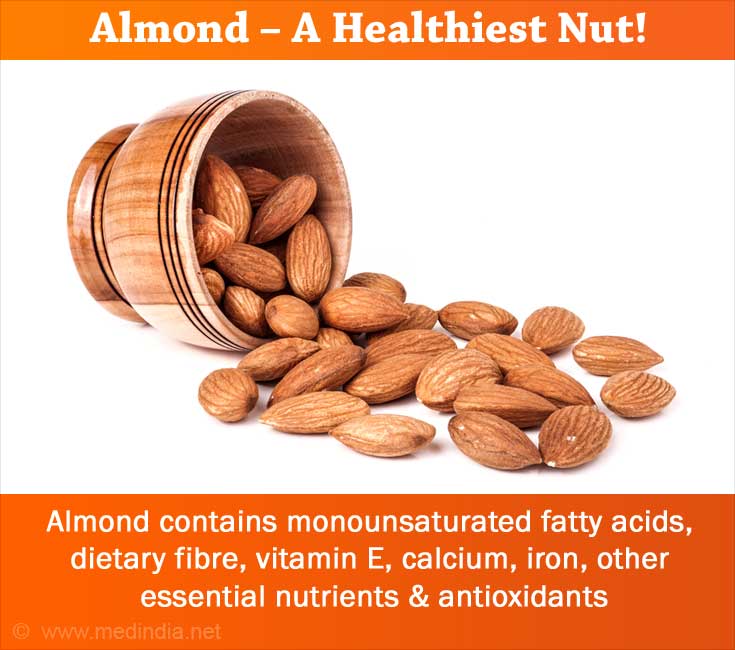 Some of the health benefits of eating almonds on a daily basis are:

Although nuts benefit health in numerous ways, people tend to avoid them for fear of weight gain. Almonds contain protein and fiber that increase satiety and aid in weight loss. According to a study published in the International Journal of Obesity and Related Metabolic Disorders that involved overweight and obese participants suggests that almond-enriched diet can help reduce body weight than a low-calorie diet. The participants who followed an almond enriched diet for six months experienced a 62% greater reduction in their BMI, 50% reduction in waist circumference and 56% reduction in body fat.

Unsweetened almond milk is an ideal option for people on a weight loss regimen. The fiber in almonds contributes to consistent bowel movements and help in weight loss. People who regularly consume almonds are far more likely to remain at their ideal weight than those who rarely or never consume almonds.

Almonds help improve memory, learning ability and supports healthy brain function. Two essential nutrients present in almonds are riboflavin and L-carnitine that help increase brain activity. A study published in the Indian Journal of Pharmacology (2010), showed that supplementation of 150mg of almonds per kilogram of body weight for two weeks improved learning, memory and reversed a form of drug-induced dementia. Also, the consumption of almonds reduced the levels of an enzyme that breaks down acetylcholine, a neurotransmitter that increases attention and awareness.

Another study conducted in mice published in Brain Research Bulletin (2016) showed that supplementation of 400mg of almonds per kilogram of body weight for four weeks significantly improved memory retention. Regular consumption of almonds can also reduce the risk of Alzheimers disease. Studies show that almonds can have a positive effect on neural activity and prevent neural degeneration and Alzheimers disease. 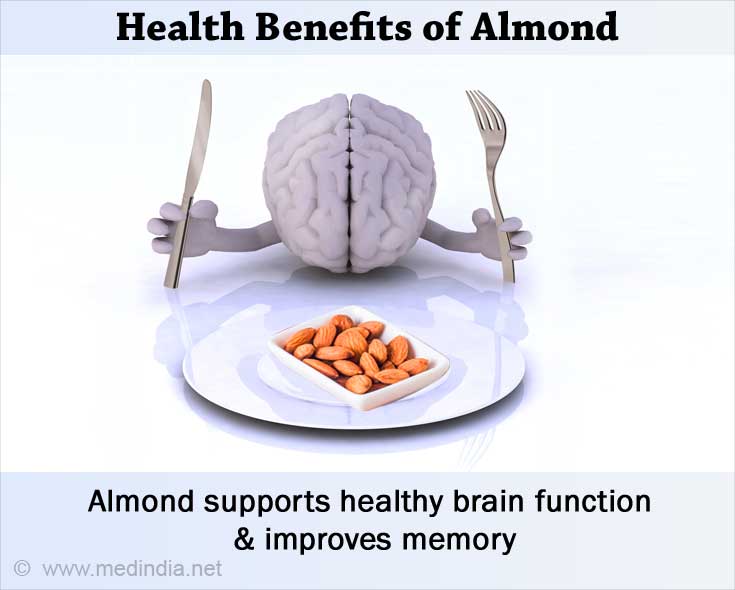 Almonds increase the immune system's defense against viruses. According to a study published in the journal Immunology, naturally occurring compounds in the almond skin stimulate the immune response and thus contribute to an antiviral immune defense. The study funded by the Almond Board of California, found that almond skin extracts were effective against Herpes Simplex Virus 2, a virus that causes cold sores and is difficult to treat.

Eating almonds can also lead to more energy, healthy and stronger muscles. Manganese, copper and vitamin B2 (riboflavin) are the three essential nutrients that play a key role in the production of energy. A handful of almonds provides more protein than an egg. Manganese and copper in almonds limit the free radicals that can hinder the mitochondria to produce energy. Thus, eating a handful of almonds can keep you going through the day.

Microminerals such as phosphorous, magnesium and calcium found in almonds are essential for maintaining bone health. Phosphorous has an impact on the strength and durability of bones, teeth and also prevents the onset of osteoporosis. A study published in Metabolism: Clinical and Experimental (2011) showed that almonds significantly reduced osteoclast proliferation and activity, suggesting that almonds have a positive effect on maintaining bone health by reducing bone tissue breakdown. 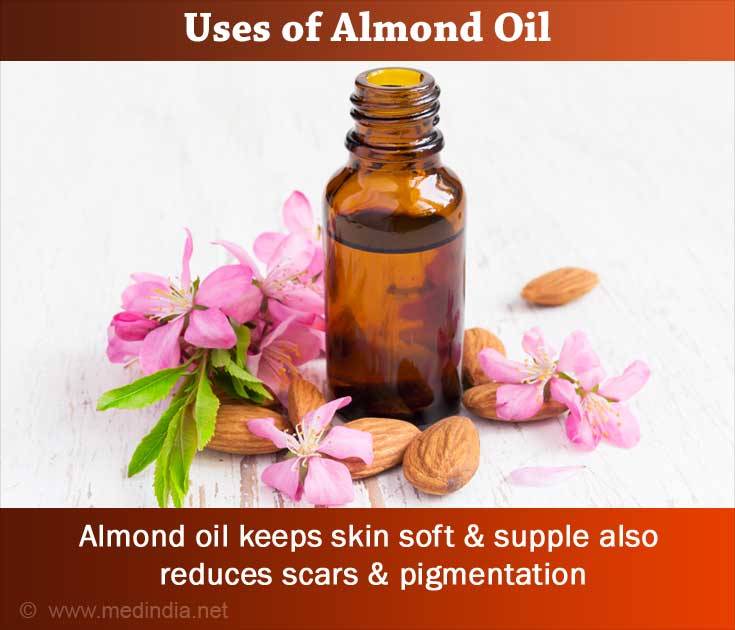 The high dietary fiber content of almonds helps prevent constipation. The amount of fiber in five almonds is sufficient to improve digestion and regularize bowel movement. Eating too many almonds without adequate fluid intake could cause gastrointestinal distress. Thus, it is important to stay hydrated.

The skin of almonds contains probiotic components that aid in digestion and healthy bacterial growth within the gut flora. A 2014 study conducted by the Institute of Food Science and Technology in China found that supplementation of 56 grams of almonds to women for over a period of eight weeks, significantly improved the number of healthy bacteria (Bifidobacterium and Lactobacillus) in their gut. 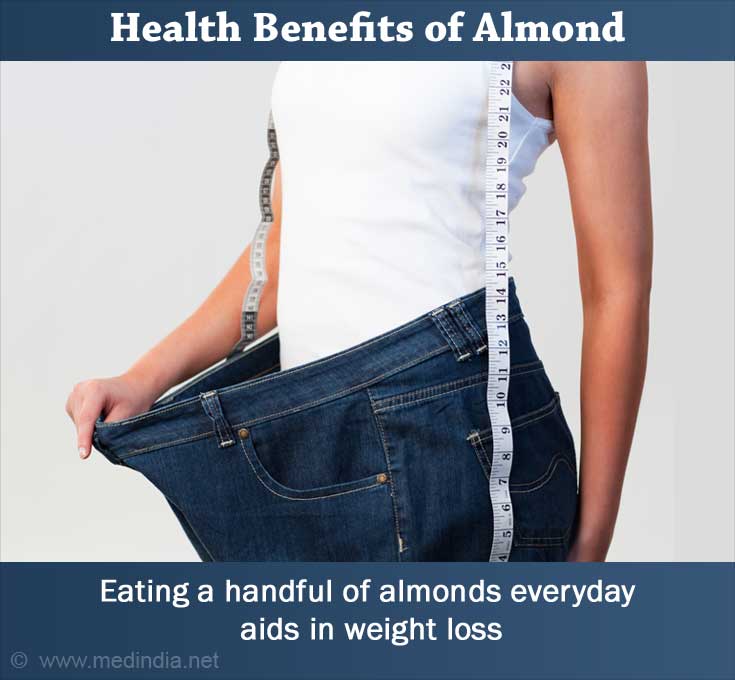 The nutritional values of "Almonds" per 100 grams are:
Data source: USDA Nutrient Database, R25
*Percent Daily Values (%DV) are based on a 2,000 calorie reference diet. Your daily values may be higher or lower based on your individual needs.
To See Full Nutrition Facts & Analysis for Almonds - click here

Latest Publications and Research on Almonds for Healthy Daily Life

Daily consumption of almonds improve the HDL cholesterol in the body. It lowers the serum lipid concentration and helps to prevent the cardiometabolic diseases.

Curb Hunger Pangs With Almonds and Wheat Flour Want to know the trick to control hunger pangs? Here is the clue.

Go Nuts!!! Eat Almonds for a Healthy Heart A recent meta-analysis reveals that almonds play a major role in heart health and cause a significant reduction in total cholesterol, LDL cholesterol and triglycerides.

Almond Milk - Properties and Benefits What is almond milk? Is almond milk good for you? This plant based alternative to dairy milk has health benefits aside from alleviating symptoms of lactose intolerance, which will be discussed in this article.