Alcoholism is a disease that has no cure, but can be managed with medical treatment and social support groups. The problem with women is that they fight shy from seeking treatment because of the stigma attached to alcoholism. People should understand that an alcoholic is a sick person who needs treatment and not resentment.

Alcoholics Anonymous (AA) started an exclusive womens group in Pune a few years back. According to a Mumbai office bearer of AA, there are four centers catering only to women addicts in Pune. Dr. Anjali Chabria, clinical psychologist, says, The growing number of single women living alone in new cities with disposable incomes is the main cause of alcoholism.

It is very difficult to understand that one drink at a party can land you where, says Joan. Mathew. Joan recalls that it was during her college days in Mumbai that she first tasted vodka. After that when ever she went to parties she saw her friends drinking and slowly she started taking one glass and then two glasses and gradually it became a habit. She did not realize when she actually became an alcoholic. Her long time boy friend left her. Though she got married, but she was unable to give up her drinking habit. Things went out of control. Her marriage was in doldrums. She went to her parents place in Kolkata where she got admitted in Kothari Medical Centre. A series of operations were conducted on the liver and the kidney. In spite of the operations being successful Joan went back to the bottle. Her husband left her. It was her best friend Liza who insisted her to attend a session of AA (Alcoholics Anonymous). 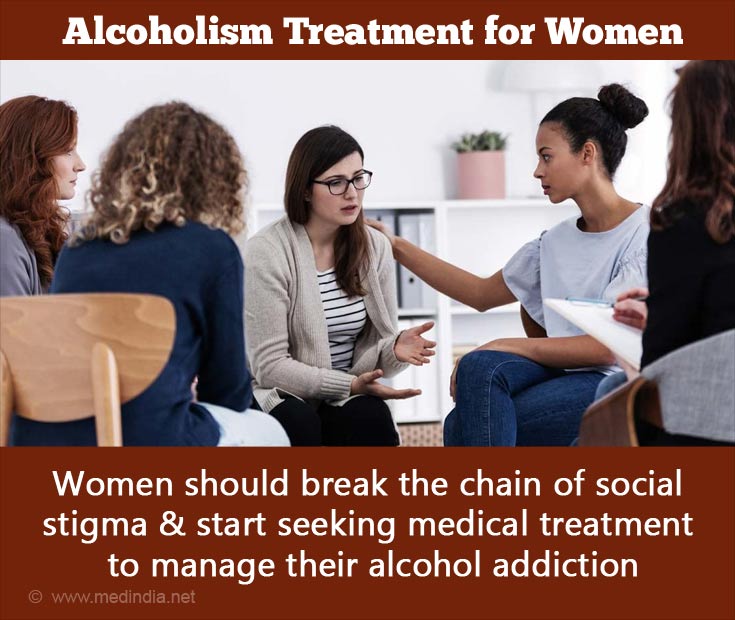 Looking at the bunch of alcoholics there, I could only laugh, says Joan. She had turned anorexic and could not bear the smell of food. She kept attending sessions, but her affair with the bottle continued. One day, she collapsed and was hospitalized again. All the alcoholics she has been listening to came to visit her. Suddenly she wanted one more chance to live.I started taking one day at a time, she says. Today the urge has disappeared, but I still feel that once you are a alcoholic, you are always a alcoholic. I know I will never be cured of the disease. I can only arrest it on a daily basis.

Sabrina Saldana has a similar story. She was just twenty when she first joined an ad- agency as a copy writer. Financial independence at a young age and peer pressure got her into the habit of social drinking. I did not even realize when it actually became a habit, she says. She could not sleep at night with out a drink. During my working hours, I used to pump myself with juices and vitamins. But suddenly I started getting shivers and shakes, she says.

It takes a lot of courage to accept the fact that you are an alcoholic and you need help to recover. Stop using alcohol to deal with the tensions of life. Who does not have problems in life? How you deal with it is what makes a difference. Learn to deal with life honestly. When it totters on the brink of a glass, dare to avoid falling in.

I want to have some question about answering in yes/no.

I completely disagree with your statement that "alcohol addiction cannot be cured, but only managed". Yes, we have cured a lot of people with severe Alcohol and drug addiction problems. To know more, please email me at t_iyer@yahoo.com / shankar@ayurxaqti.com with your problem. I am sure we would be able to cure you / your loved one COMPLETELY of alcohol and / or drug addiction problems. We are located at Bangalore, India.

Bubbles and Brews - Alcohol Facts There is more to alcohol than mere intoxication. Infamous because of its social abuse but indispensable because of its many industrial applications.

Alcoholism Alcohol use disorder or alcoholism is an inability to control drinking. It can cause short term and long term physical, as well as psychological effects on the patient.
Sign up for Wellness Consult a Doctor Sign up for Selfcare
Advertisement
Health Topics A - Z
A B C D E F G H I J K L M N O P Q R S T U V W X Y Z