As fat cannot absorb alcohol, it is concentrated at higher levels in the blood. Women are at a higher risk for certain diseases like liver, brain and heart damage. Women are also generally shorter and lighter than men, further concentrating alcohol in their blood. Therefore when a woman of average size consumes one drink, it will have almost the same effect as two drinks for the average size man. If women eat little or skip food entirely, that compounds the effects. 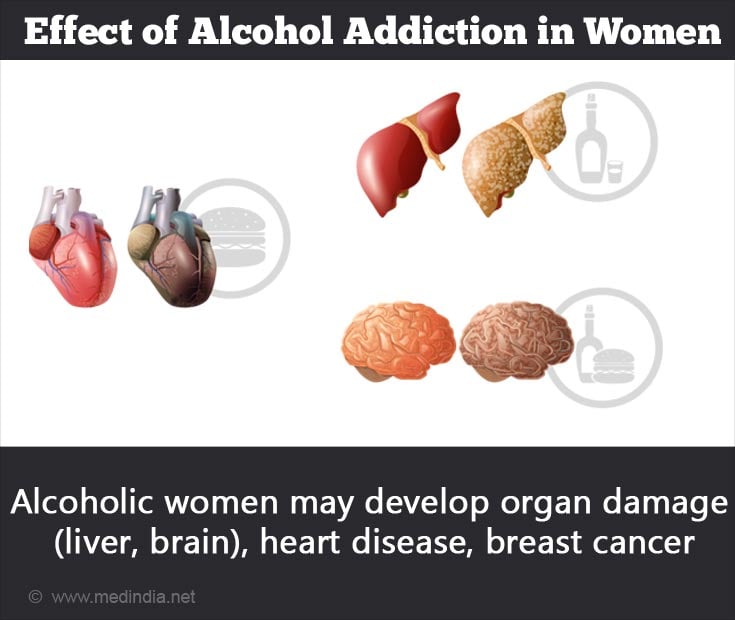 There are many multiple factors that affect women more than men even though they drink the same amount of alcohol such as:

Brain Damage - Women may be more vulnerable to brain damage. With the help of MRI scans, a study shows that multiple brain functions are reduced in alcoholic women when compared to both nonalcoholic women and alcoholic.

<< About
Symptoms - Indications of Alcoholism >>

I want to have some question about answering in yes/no.

I completely disagree with your statement that "alcohol addiction cannot be cured, but only managed". Yes, we have cured a lot of people with severe Alcohol and drug addiction problems. To know more, please email me at t_iyer@yahoo.com / shankar@ayurxaqti.com with your problem. I am sure we would be able to cure you / your loved one COMPLETELY of alcohol and / or drug addiction problems. We are located at Bangalore, India.

Bubbles and Brews - Alcohol Facts There is more to alcohol than mere intoxication. Infamous because of its social abuse but indispensable because of its many industrial applications.

Alcoholism Alcohol use disorder or alcoholism is an inability to control drinking. It can cause short term and long term physical, as well as psychological effects on the patient.
Sign up for Wellness Consult a Doctor Sign up for Selfcare
Advertisement
Health Topics A - Z
A B C D E F G H I J K L M N O P Q R S T U V W X Y Z

How to Choose the Best Eczema-Friendly Moisturizer for Children?
View all
Advertisement
Alcohol Addiction and Women - Related News
Alcohol Exacerbates Skin Diseases and Psoriasis
If You are Doing Hot Yoga, Make Sure You are Drinking Plenty of Water
Alcohol Awareness Month
More News