Medindia » Diet and Nutrition » Effects of Acid build up

Effects of Acid build up

Effects of Acid Build Up in Our Body

The difference between a 20 year old and a 40 year old physically is that there are more of accumulated acidic wastes at 40 than at 20.

When we are born we have the highest alkaline mineral concentration and also the highest body pH. One accumulates more acidic wastes with age.

There is not much blood flow around fat. Any organ or tissue near the acid accumulation gets a smaller supply of blood and can get damaged in the long run. Its said that the acidic food and drinks lower ones blood oxygen level 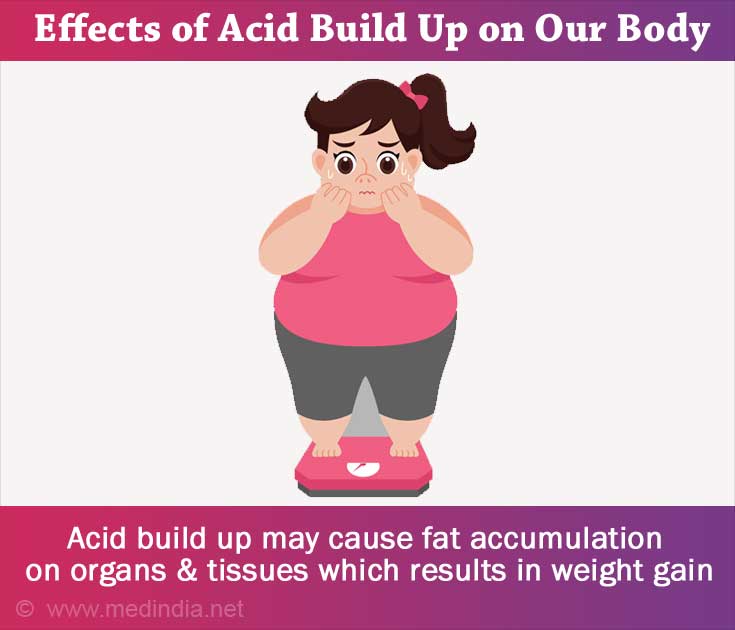 Following are the effects of acid build up in the body:

In an article in European Journal of Nutrition on 'Diet, evolution and aging--the path physiologic effects of the post-agricultural inversion of the potassium-to-sodium and base-to-chloride ratios in the human diet' Frassetto L and others argue that any level of acidosis may be unacceptable from an evolutionarily perspective, and indeed, that a low-grade metabolic alkalosis may be the optimal acid-base state for humans. Our ancestors mostly ate fruits and vegetables whereas after industrialization - only 200 years ago our diet changed and many health problems resulted from this mismatch between our genetically determined nutritional requirements and our current diet. The current diet has deficiency of potassium alkali salts (K-base), that are amply present in the plant foods that our ancestors ate in abundance, and the exchange of those salts for sodium chloride (NaCl), which has been incorporated copiously into the contemporary modern diet. Their research has shown that contemporary net acid-producing diets do indeed characteristically produce a low-grade systemic metabolic acidosis in otherwise healthy adult subjects, and that the degree of acidosis increases with age, in relation to the normally occurring age-related decline in kidney functional capacity. They also found that neutralization of the diet net acid load with dietary supplements of potassium bicarbonate (KHCO3) improved calcium and phosphorus balances, reduced bone resorption rates, improved nitrogen balance, and mitigated the normally occurring age-related decline in growth hormone secretion--all without restricting dietary salt or NaCl. Other researchers showed that hip fracture incidence in older women correlated with animal protein intake, and they suggested a causal relation to the acid load from protein. Plant food intake tended to be protective against hip fracture, and that hip fracture incidence among countries correlated inversely with the ratio of plant-to-animal food intake. These findings were confirmed in a more homogeneous population of white elderly women residents of the U.S.

<< Homeostasis and the Acid Disposal System of our Body
How to achieve Well-being by Creating a Physical Alkaline En... >>

Pancreatitis Pancreatitis or inflammation of the pancreas may show up as acute pancreatitis or chronic pain. Alcohol consumption is the main offender. Treatment requires hospitalization and at times surgery.

Pregnancy and Diet Pregnant women should pay special attention to their diet. The diet before and during pregnancy should be rich in calories, proteins, vitamins and minerals.

Smoking Risk Calculator Do you smoke cigarettes daily? Use medindia smoking risk calculator and calculate your reduced Life Span due to Smoking.

Soft Drinks - Are They Safe? Soft drinks like cigarettes and alcohol are harmful to health and should be avoided.

Gout and Diet In gout excess of uric acid appears in the blood and its particles are deposited in joints as tophi.
Sign up for Wellness Consult a Doctor Sign up for Selfcare
Advertisement
Health Topics A - Z
A B C D E F G H I J K L M N O P Q R S T U V W X Y Z