Nose-bleeds occur due to rupture of blood vessels in the nose and are a common problem affecting people in summers. The blood vessels rupture due to dryness, and excessive heat

Nose-bleeds, also known as epistaxis (bleeding due to damage of blood vessels in your nose), are a common problem affecting many people. Nasal bleeding isnt a sign of anything serious most of the time and occurs easily due to the location of your nose and the rich network of blood vessels inside it.

Nose-bleeds usually happen in summers and are less common in winters. This mostly occurs in summer when the minute blood capillaries burst due to hot air or picking at the dry mucus inside the nose. They most commonly occur in kids between the age of 2 and 10 years and adults between 50 and 80 years of age.

What are the Reasons for Frequent Nose-bleeds During Summer?

Summers are usually dry and hence bad for your nose. The delicate protective layer within the nasal cavity turns dry due to low humidity in the hot weather, resulting in nose-bleeds. Also, the summer heat tends to increase episodes of allergy, which are known to cause excessive nose-bleeds.

1. Keep the inside part of your nose moist as dryness can cause nose-bleeds.

Nasal saline sprays or other lubricating ointments/gels like a petroleum jelly are useful to promote tissue healing and keep the nasal cavity moist.

2. Use a humidifier at home to maintain hydration and avoid using cold and allergy medications too often. These can dry out your nose.

3. Avoid smoking as it can irritate the inside of your nose and dry it out.

4. Dont pick your nose too often as well as dont blow or rub it too hard. Trim your childs fingernails short and discourage children from picking their nose.

5. Cover your head with a cap or a stole when outdoors. Also cover your nose with a handkerchief or a cotton cloth to avoid hot air drying the insides of the nose. Washing your nose with cool water and avoiding being in direct sunlight for too long may help to prevent nose bleeding during summer.

6. Steam inhalation can work wonders in preventing nose bleeding. When you take steam, it moistens and protects the nasal cavity as well as reduces nasal irritation thus avoiding any bleeding. 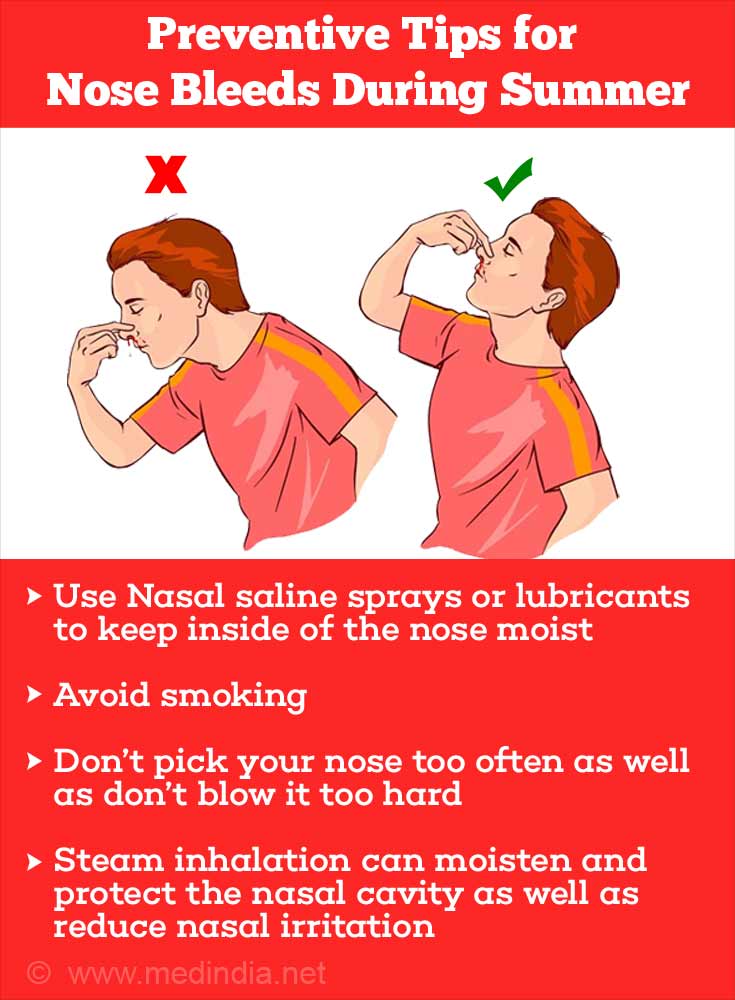 Here are some home remedies to avoid nose bleeds this summer: 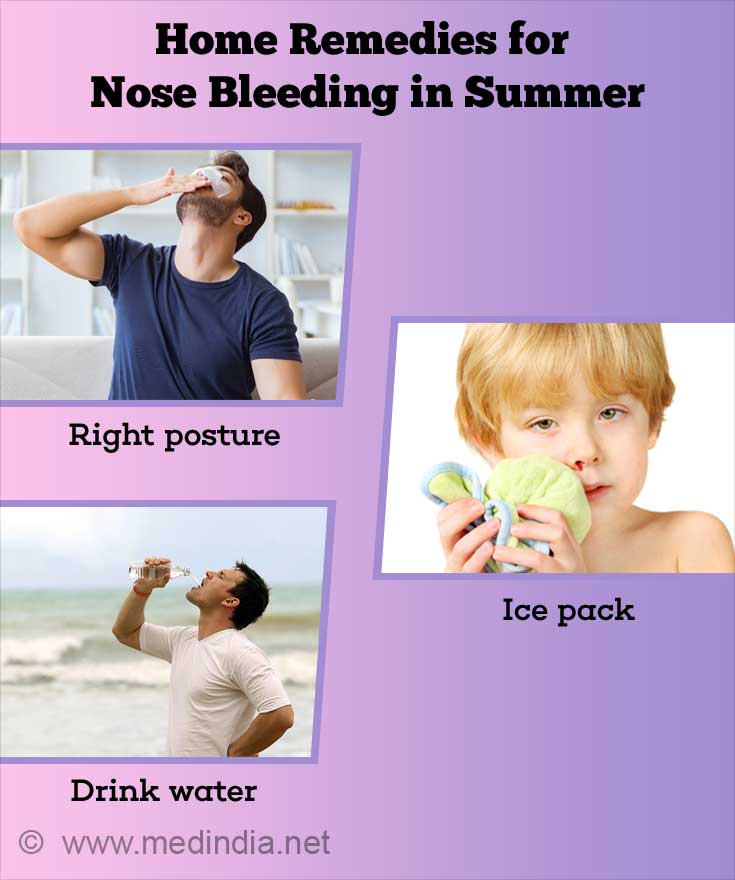 By taking precautions it is easy to prevent nasal bleeding, especially in individuals who are at a high risk. Being stress-free by opting for meditation can also strengthen the local nasal blood vessels and prevent bleeding. Also, the key factor for causing nose bleeding in summer is dryness; therefore find ways to keep yourself hydrated always.

Quiz on Nosebleed
Nosebleeds are common problems that often occur during dry climates. The condition is usually minor and stops with some first aid. Here is a quiz to help you understand more about ...

Home Remedies for Nosebleeds
Nosebleeds, also known as Epistaxis, are a common occurrence but can be treated easily at home with simple firstaid measures.

Nosebleed Symptom Evaluation
Nosebleed (Epistaxis) is a bothersome symptom and often causes panic. Minor bleeds are self limiting and stops spontaneously, however persistent bleed that lasts for over 30 minutes require further evaluation.

Top 12 Tricks to Stay Cool on Hot Summer Nights
Hot summer nights are sweaty. There could be nothing worse than not being able to sleep at night due to soaring temperature. Are you looking for ways to beat the summer heat to catch some blissful sleep? Here are a few tricks to help you stay cool ...
Sign up for Wellness Consult a Doctor Sign up for Selfcare
Advertisement
Health Topics A - Z
A B C D E F G H I J K L M N O P Q R S T U V W X Y Z